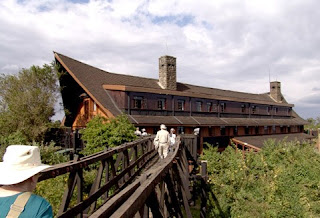 The Aberdare is the established name of a mountain range, which thrusts directly north from Nairobi for more than 160 kilometers. The intrepid Scot Joseph Thomson, who explored the region, named the range after the President of the Royal Geographical Society 1883. The Kikuyu name Nyandarua is slowly gaining prominence. Part of the range is protected as the Aberdares National Park and encompasses all land over 3200 meters together with a projection due east known as The Salient, which reaches down to 2130 meters near Nyeri town. The park is a fairyland, awesome in its majesty and beauty.

Crossing the Aberdare Mountains is an unpredictable event since rain is both frequent and heavy. The highest point of the range is Ol Donyo Satima, which means the mountain of the young bull in Maa, the language of the Maasai, which reaches 3998 meters. There is a road that traverses the mountains from Naivasha to Nyeri, which can be handled by a sturdy car in good weather. At its maximum elevation the road passes through misty moorlands at about 3350 meters, where strange six meter tall mutants of alpine plants: groundsel, erica, hypericum, lobelia and sennecio - grow in profusion. Icy rivers plunge in glorious cascades and spectacular waterfalls. The salient, which thrusts a dense forest through rich farmland, is where both Treetops and the Ark are situated.

The Salient's origin lies in an elephant migration route between the two mountains. The forest is rich in wildlife; elephant and rhino, warthog, bush pig and giant forest hog, waterbuck, duiker, suni, dikdik, bongo and reedbuck are all to be seen. On our many return visits to the Ark, in June 2003 we had the opportunity to see a male and female rhino with ease from The Ark Lodge during the evening hours at the Aberdares National Park. In the canopy the black and white colobus monkey performs its aerial acrobatics and Sykes' monkey and the black faced vervet can also be found. The carnivores are represented by: lions, usually more hairy and spotted than on the plains, leopard and serval cat, the latter often seen on the moorlands and sometimes in its melanistic state.

Birds are not only dazzling but also plentiful. The crowned eagle (which eats monkeys) is everywhere and the forest echoes to the shrill cries of the Silvery-cheeked hornbill. The resplendent sunbirds are well represented, among them the brilliant metallic violet Tacazze, the emerald green Malachite Sunbird and on the moorlands the Scarlet tufted Malachite Sunbird, with its very long slender tail.

The number of visitors to the Aberdares National Park is high in the park rankings but this is because of the Ark and Treetops. The park itself is still very much under-visited despite its grandeur and its powerful vistas.

Accommodations:
Treetops Lodge
The famous Treetops Hotel started life in a very humble way. In 1932, its first visitors gingerly climbed the wild fig tree supporting the two-room tree house. By 1952, Treetops had expanded. Now a four-room construction. Treetops Lodge welcomed a young English girl, its most famous visitor. This young English girl climbed the tree as a princess one afternoon, to descend the following morning as Queen Elizabeth I I, her father, King George VI, had died during the night.

By now, Treetops reputation had spread far and wide; for the globetrotter, the rich, the famous, and the fashionable, no visit to Africa - Kenya was regarded complete without experiencing the Treetops adventure. Even today, with all the exciting safari lodges, and camps Kenya has to offer, 50 room Treetops heads the list for many of our customers. Treetops is sited in the heart of the dense lichen hung forest of the Aberdare National Park and overlooks two waterholes, and the magnificent snowy peaks of Mount Kenya.

For the safety and comfort of several observation lounges, guests can photograph at close quarters the territorial charge of short sighted rhino, a protective elephant matriarch chaperoning her calf, the graceful bounding of a bushbuck doe. A family of lions, have on more than one occasion, made a meal of some poor unfortunate warthog to the fascinated horror of Treetops dinners.
For those guests who value their sleep as much as the nocturnal entertainment, everyone is allocated a comfortable bed in either a single or twin room with plentiful shared bathroom facilities, or on request, suites with its own bathroom. If you wish to do your game viewing the 'lazy way', the professional hunter can wake you up each time one of the big five visits the tree house! Make sure you do not miss out an experience of a lifetime.

The Fairmont Ark Lodge:
Accommodation at The Ark Lodge is in 60 en-suite rooms and is set in the heart of the Aberdare National Park, The Ark is a unique tree lodge that overlooks a floodlit waterhole and a saltlick which attracts a host of wildlife. Elephant, Rhino, Leopard, Bushbuck and occasionally an elusive Bongo and giant forest Hog has been sighted.
Resembling and named after Noah's Ark, The Ark is designed with 'decks' from which numerous balconies and lounges provide superb vantage points for game viewing. A ground level bunker provides excellent photographic opportunities and takes you closer than you would believe possible to the animals.

Watch the constant comings and goings at the waterhole and salt lick. Elephants love the natural salt lick and get onto their knees to dig into the ground with their tusks. They then lick up the salty earth. This goes on for hours and they finally quench their thirst at the waterhole. Numerous other animals visit this busy meeting place all day and night so there is always something to see.

A buzzer system operates in each room to alert you when there is something very special to see such as a Leopard, who usually sneaks to the floodlit waterhole in the dead of night. It is of course up to you whether or not you get up!

Child Policy: Children under the age of 7 are not permitted at The Ark unless on special 'Children’s Nights'.

To take Aberdare safari and book yourself into the Treetops Lodge or Ark Lodge in Aberdares, check offers with Mount Kenya Climbing Expeditions or contact: [email protected]