The Legend of Olomana
Mount Olomana is one of the most spectacular hikes on the island of Oahu. The three peaks actually all have different names, but the whole geographical feature is commonly known as Olomana. The second Peak is named Paku'i while the third is named Ahiki. In Hawaiian, Olomana means, "divided hill." According to legend, Olomana was a warrior over 30 feet tall, a giant. He ruled the lands on the Windward side of Oahu from Kualoa to Makapu'u. The king of Oahu at the time Ahuapau sent on of his greatest warriors Palila to take on Olomana. Palila being very powerful cut Olomana in half, sending his upper torso into the ocean leaving his lower half, where Mount Olomana is today. I myself have done the hike several times to the first peak. But only twice to the third peak. Once in 2001 with my friends Kim and Matt, and most recently in April 2010 with my brother Kurt.

Video I took at the tops of the 3 peaks Olomana, Paku'i and Ahiki. I made a mistake during the 3rd segment of the film when I called the first peak hidden behind the clouds the third peak.

On the way to the entrance of the trail 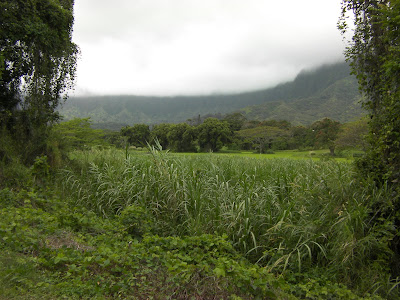 If you drive to Olomana you should park off near the bridge next to Kalanianaole Highway off of Auloa Road. After parking, you will have to follow the road in, pass a guard shack for Luana Hills golf course, then keep walking until you see the sign below. I would give Olomana a 5 out of 5 for difficulty as it has vertical areas of rock climbing. Ropes may or may not be provided and you must use them at your own risk if they are there. So please keep the keiki (children) at home, and those scared of heights. Most people just hike up to the first peak. The first peak does have some rock climbing portions, but the second and especially the third peak can get quite treacherous. Exercise extra caution of you decide to hike those. Also, the hike will take approximately 2-3 hours depending on if you hike to the third peak or not, so bring water with you. A large bottle of water should suffice, or a full camelpak. 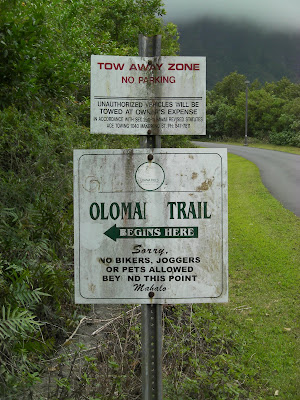 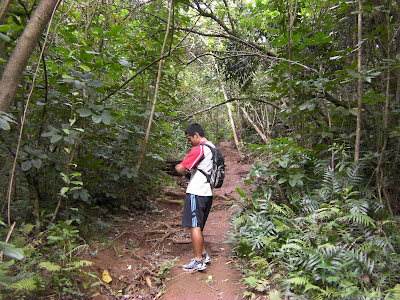 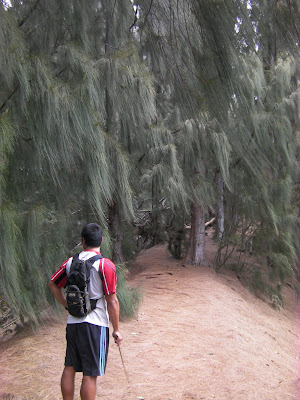 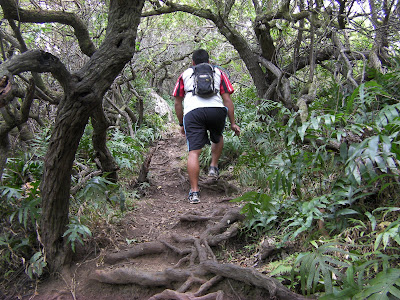 View of Enchanted Lakes (Halfway Point to the First Peak) 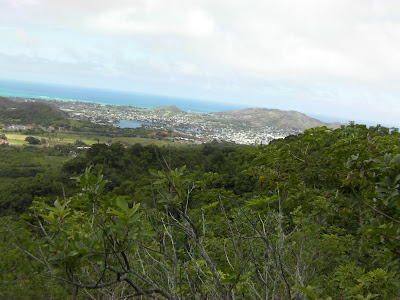 View of Aikahi and Marine Corps Base 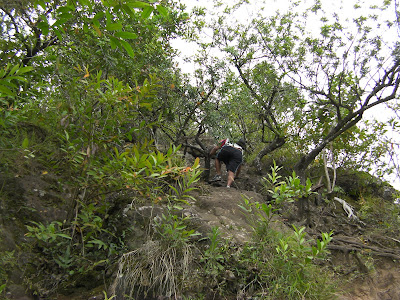 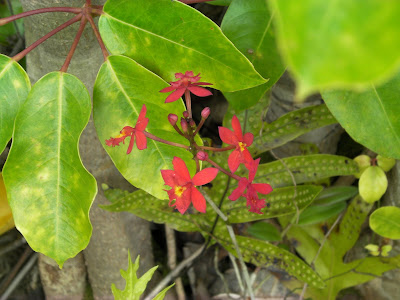 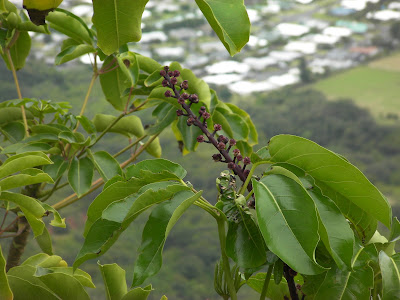 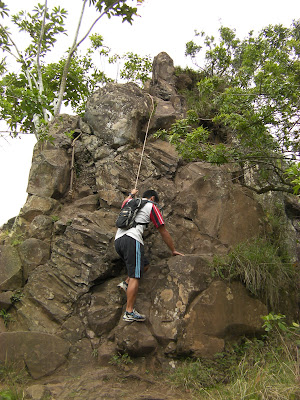 Cool rock formations you will notice up Olomana once you start nearing the top. 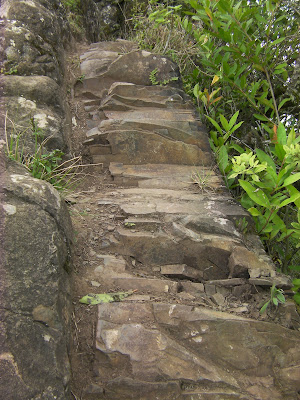 On Second Peak Looking at Third 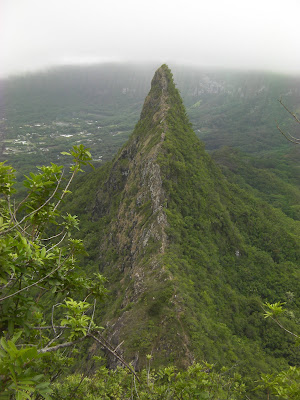 Down the Second Peak to Get to Third 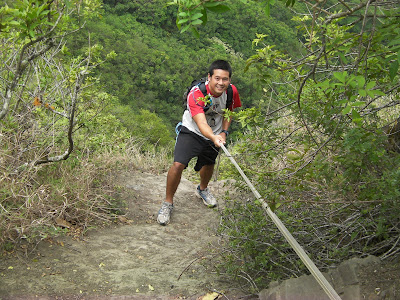 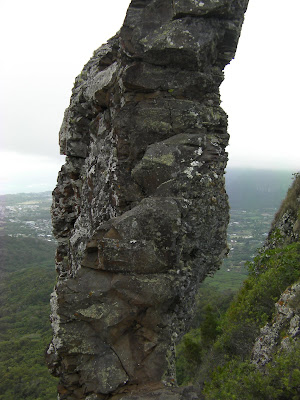 Pictures from the hole in Olomana. Take a look at Mount Olomana from certain spots in Enchanted Lakes on a clear day and look toward the third peak, you can actually see this hole. 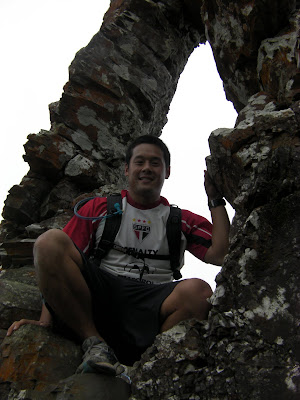 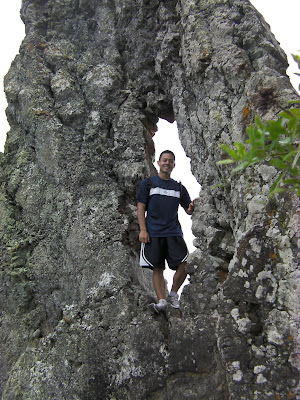 If you get to the third peak make sure to log your name in this book. Hopefully it is still there when you get there. 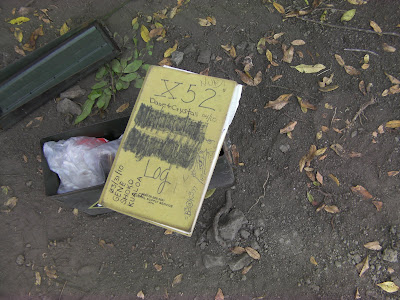 My Chinese entry in the book 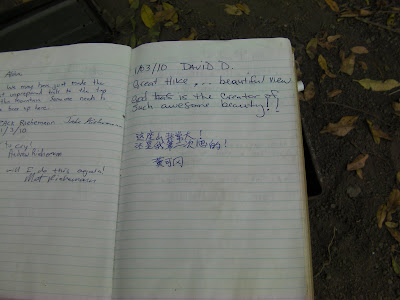 On the way back, up the second peak. Notice how small my brother is at the bottom. 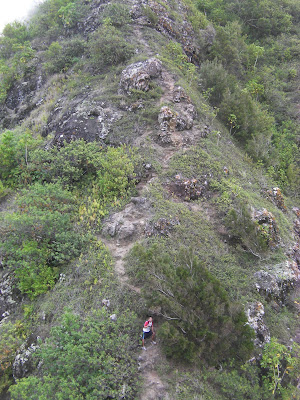 Make the Visit to Hike Olomana!

I would say that this hike is well worth the time and effort it takes to climb. The scenery is rewarding, and if you are lucky, you will get to log an entry into the book at the third peak. Again most people tend to just climb to the first peak and go back down. However, doing so will make you miss the cool hole in the mountain, and all that fun rock climbing with steep drop-offs at both ends! You will burn well over 600 calories on this hike too! And if that doesn't wanna make you climb Olomana, then I dunno what will.