The true beauty of Spiti Valley lies in its several small villages and towns. Gue village and Tabo town are few such gems of Spiti Valley. In our previous blog, we wrote about the places to visit in Kinnaur valley. Nako is the last village in Kinnaur and lies very close to the border where Kinnaur merges with Spiti Valley. One enters Spiti Valley at a village named Sumdo where the Pare Chu river re-enters India after a journey in Tibet and merges with Spiti River. The road from Sumdo to Kaza (headquarters of Spiti Valley) is built along the banks of Spiti River. We immediately saw the difference in terrain as we entered Spiti Valley. Whatever patches of greenery were seen in Kinnaur Valley disappeared and there were only grey and brown hills all around in Spiti Valley. This is typical Spiti Valley - greenery is only around the villages where there are fields; otherwise one sees only the stark barrenness. Gue village is located at a distance of 12 kilometres and Tabo village at a distance of 28 kilometres from Sumdo. In this blog, we provide you with a travel guide to visit two beautiful places in Spiti – Tabo and Gue. 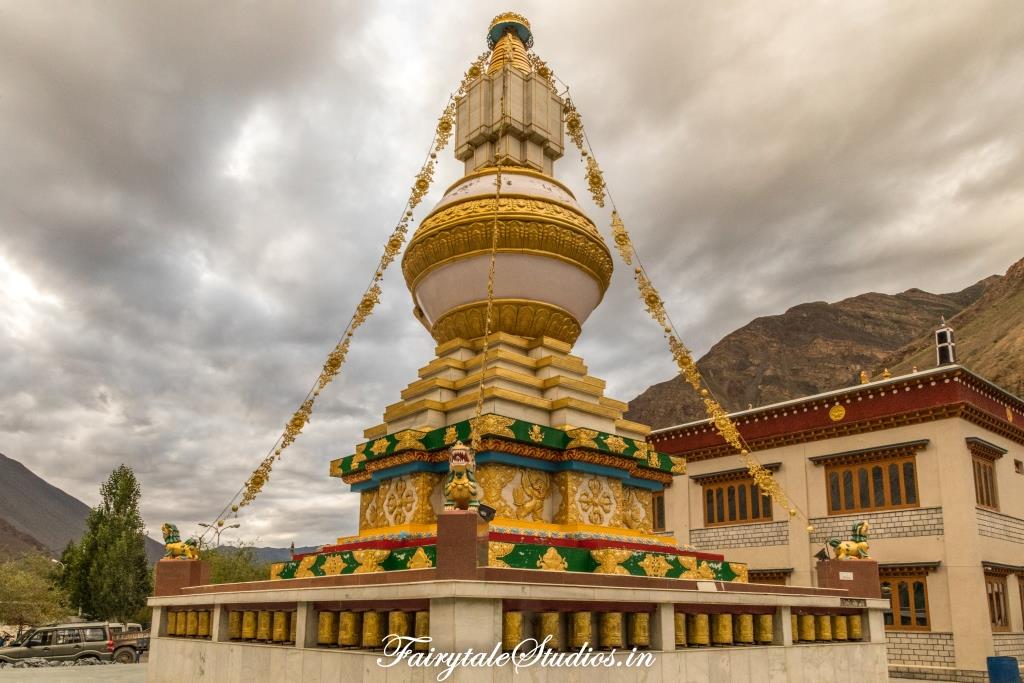 Read our previous blogs of the series 'Surreal Spiti' by clicking on the links or photos below:
1. Introduction to Spiti Valley
2. Plan your trip to Spiti Valley
3. Travel Guide to Kinnaur Valley 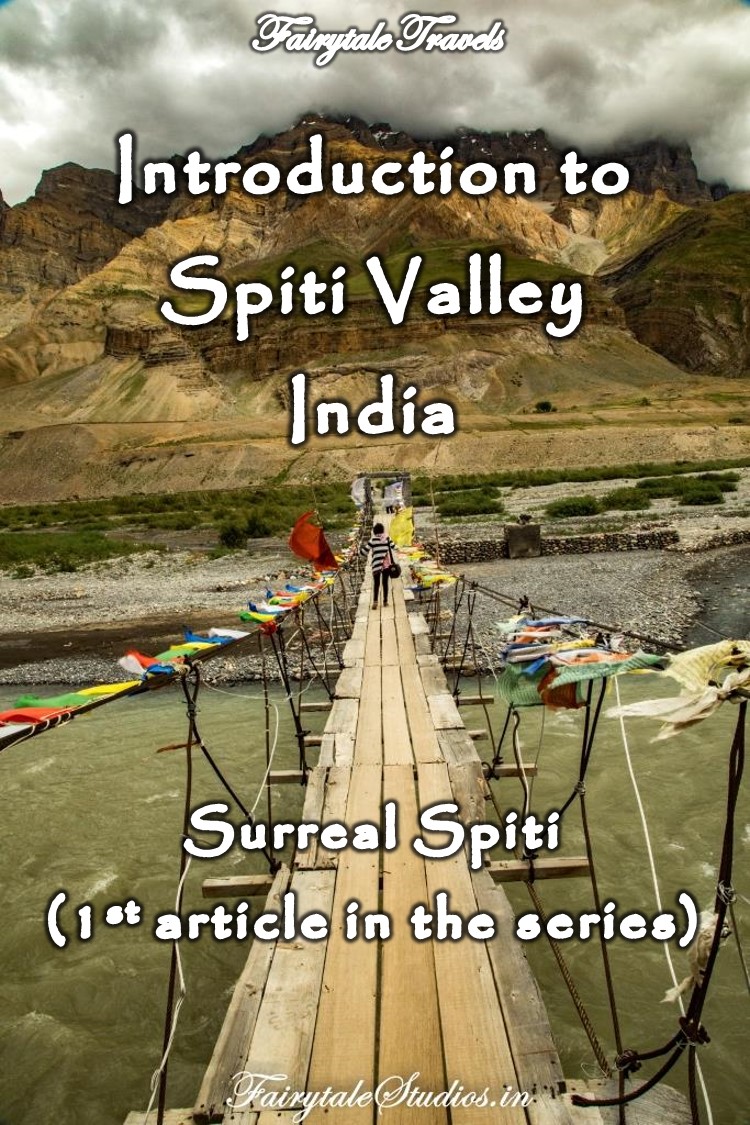 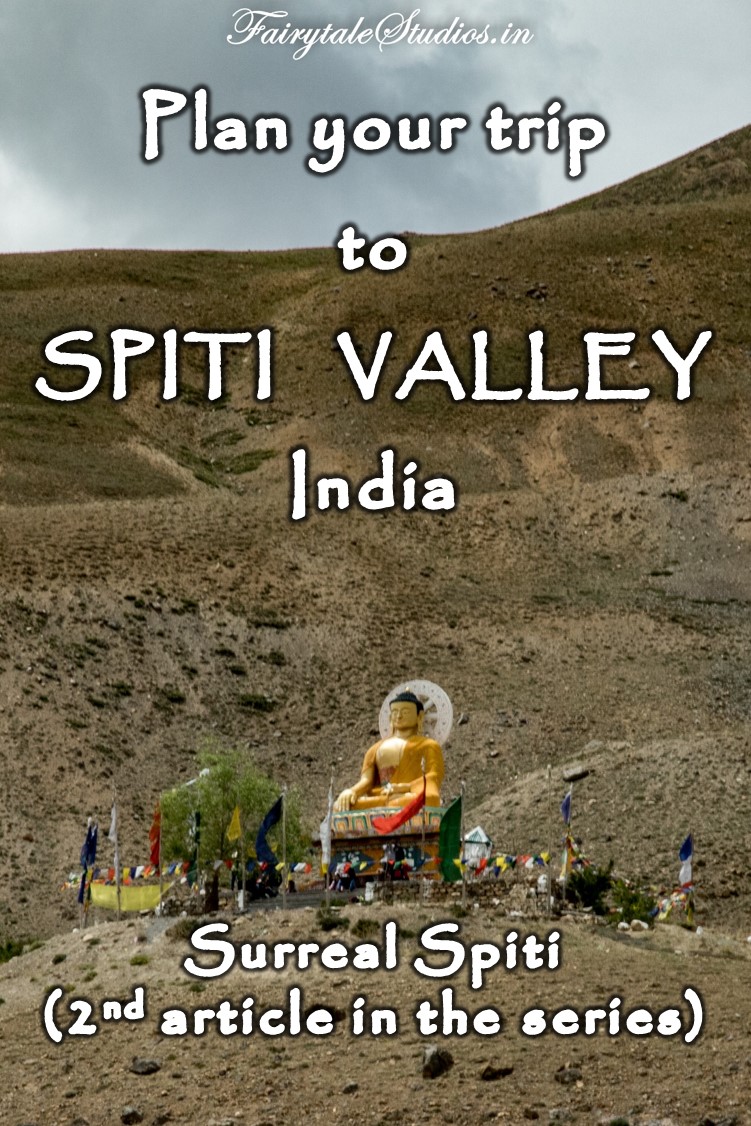 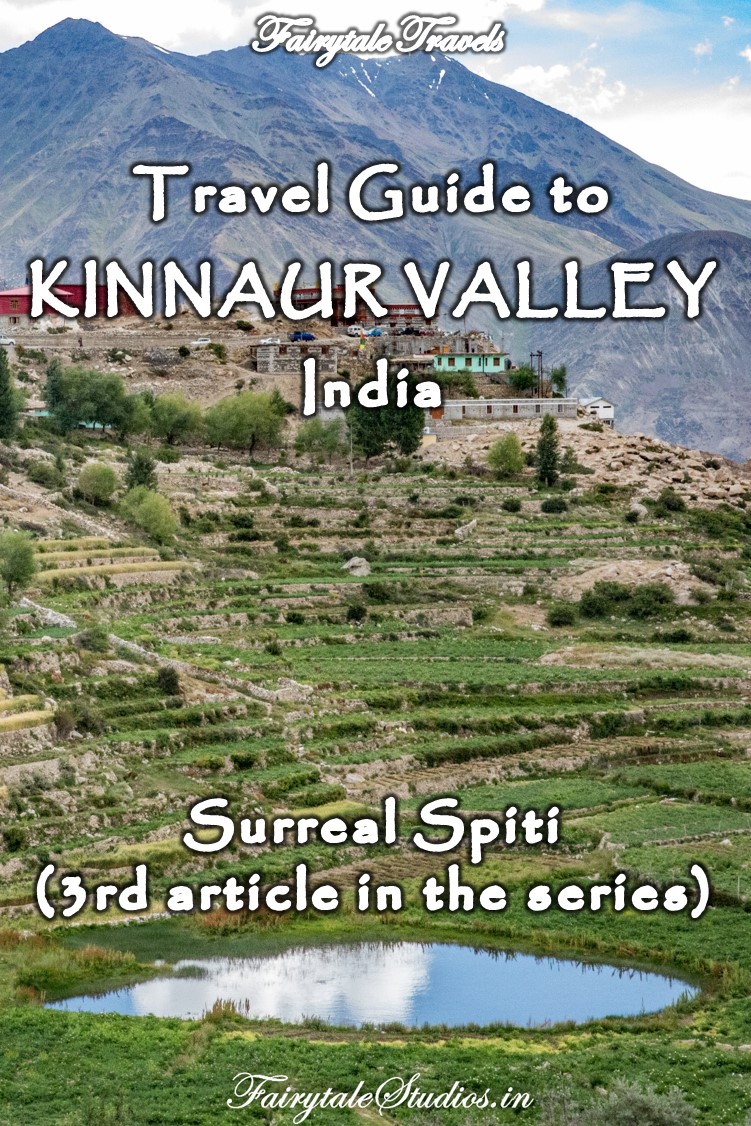 GUE
Gue is a tiny hamlet located almost on the Indo-Tibet border, between Sumdo and Tabo in Spiti Valley. It is stationed at an altitude of 10,500 feet above sea level. Mountains engulf the entire Gue village from all the sides. The village is untouched by commercialisation and makes for an excellent offbeat destination. Gue village barely comprises of 50-70 houses and a temple with a quirky history. It is famous for housing India’s only naturally preserved mummy of an old lama/ monk. 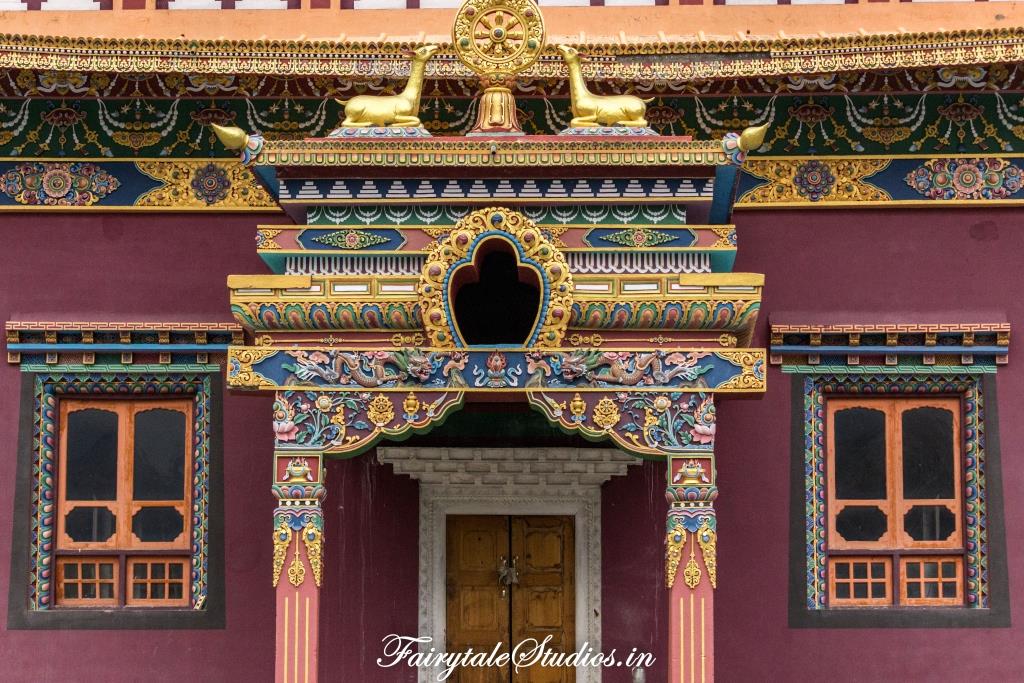 Location of Gue village:
Driving on NH-505, about 30 kilometres from Khab one enters Spiti at Sumdo. Just 4 kilometres after crossing Sumdo, is a bridge over the Spiti River. A right turn and a slight detour of about 10 kilometres from here will take you to Gue village. It will take approximately 40-45 minutes on the rough road to reach Gue from the bridge. The way to Gue is guarded by a narrow gorge and the village is rather difficult to approach. Driving straight till the end of the road, atop a hillock, is the last structure in the village –The Gue mummy lama temple or The Gue monastery. 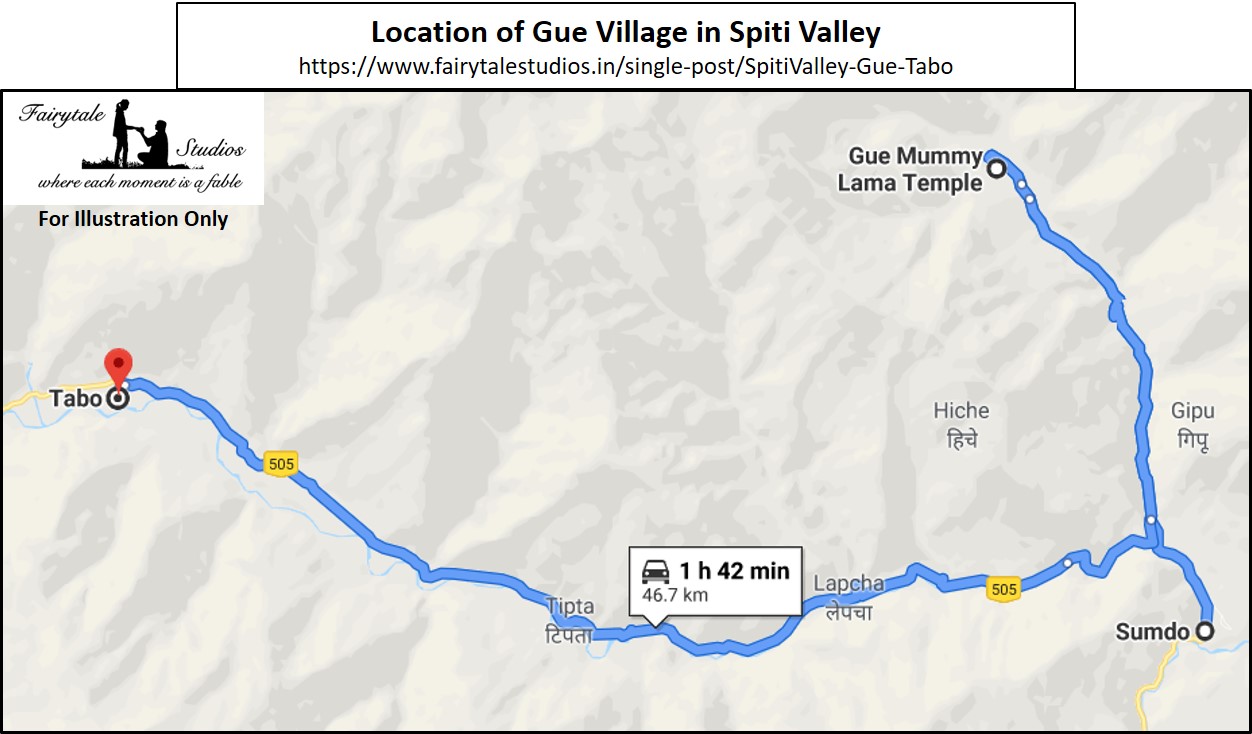 History of Gue mummy lama temple:
According to the locals, the mummy is believed to be 500 years old and that of a lama named Sangha Tenzin, who supposedly sacrificed his life for the betterment of his village. The mummy is remarkably well preserved, with intact skin, teeth visible through lips, growing nails and hair. 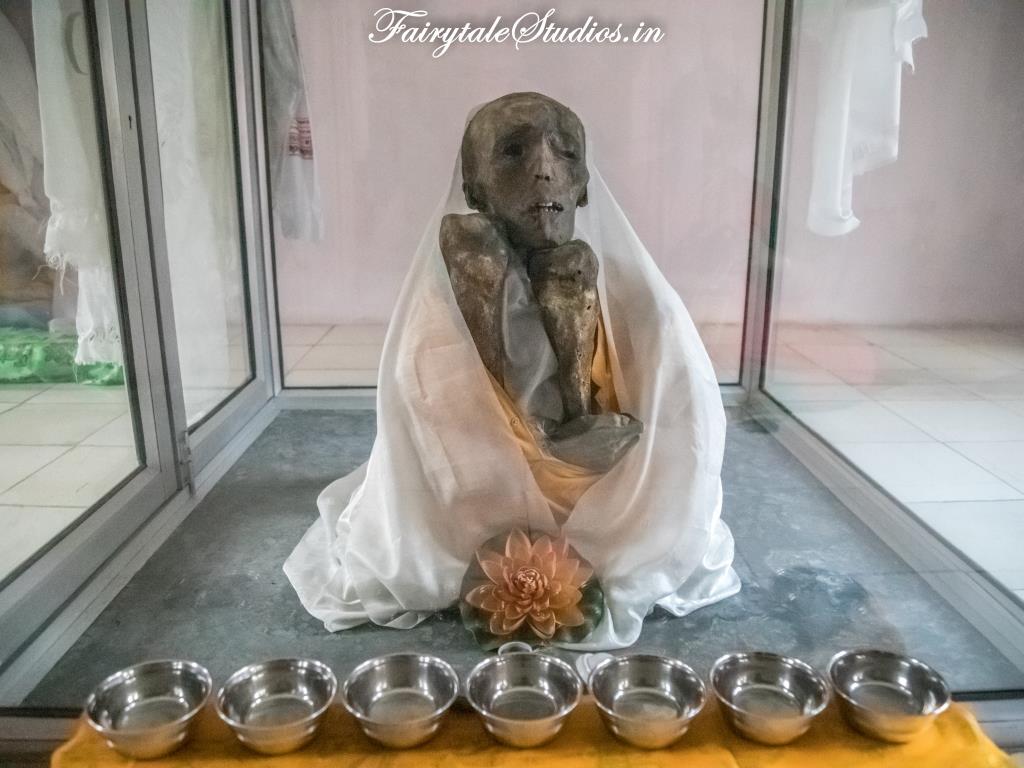 It is said that, in 1430 AD, the village was hit by a plague of scorpions. This is when the lama requested his disciples to naturally mummify him to free the village from the plague. Just when he passed away, it is believed that a rainbow appeared towards the horizon following which the plague ended.
Natural mummification is a ritual that was conducted by Buddhist monks of Japan. In this process, the spiritual masters used to starve themselves to slow death by meditating. The monks were made to eat a solely tree-based diet to deplete their body’s fat reserves. They ingested poisonous nuts to vomit to remove moisture from the body. By the time of their death, the body would be devoid of fat and their organs would be shrunken. During this phase of slow starvation, candles were run along the skin of the monks to dry it out. Hence the body wouldn’t decompose after their death but start getting preserved by the process of natural mummification. 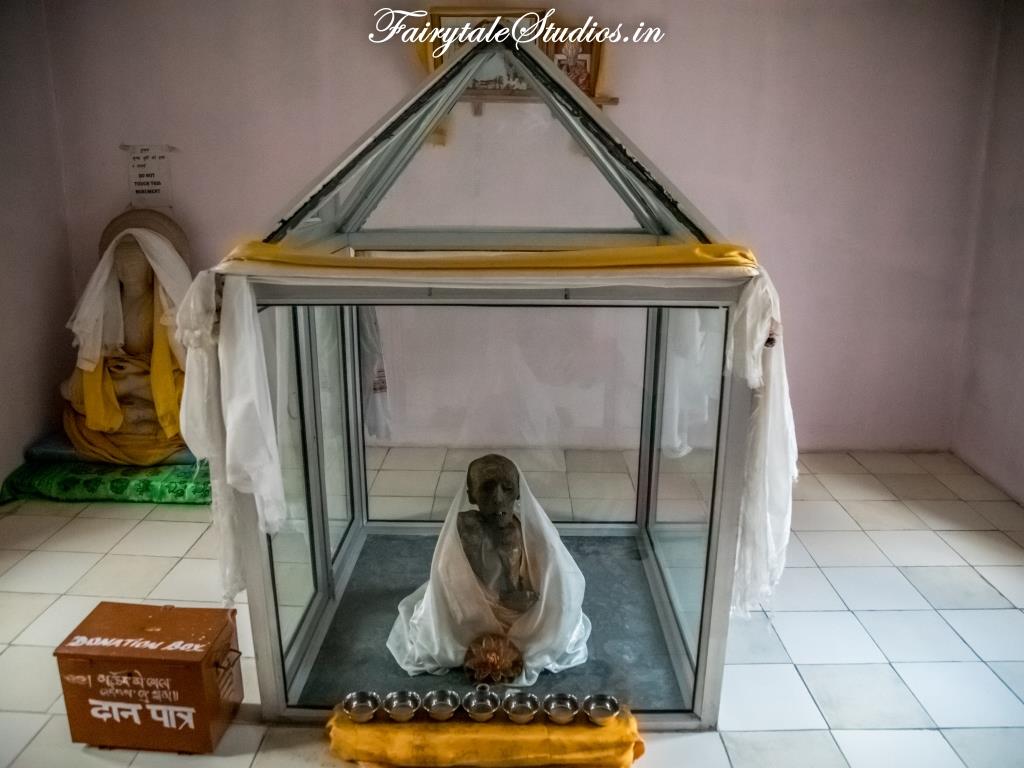 Interestingly, in the earthquake of 1975 in Spiti Valley, the tomb housing the mummified body of Sangha Tenzin was exposed. In 2004, the Indo-Tibetan border police excavated the tomb, removed the mummy and displayed it in the Gue mummy lama temple, 4 kilometres from where it was excavated. In 2002, a famous scientist from Oxford University of California, with the help of carbon dating, concluded that the mummy is 500 years old.
Gue mummy lama temple:
The Gue mummy lama temple is dedicated to the lama – Sangha Tenzin. The mummy of the monk is however kept in a separate room. The mummy is protected by a rectangular glass enclosure and is in a squatting position dressed by silk robes. It sits with the chin resting on its knee and a hand around one leg. Despite having no artificial preservation, the mummy is still intact and shows no deterioration. The clean air, low humidity and cold in the region may have contributed to its excellent state. 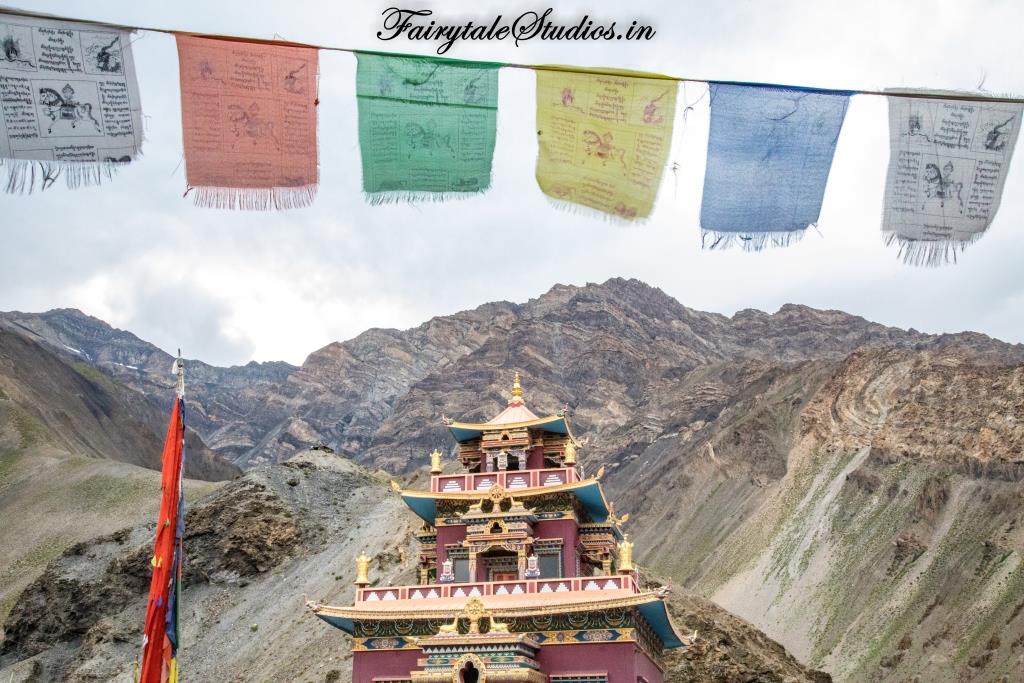 The Gue mummy lama temple is strikingly colourful against the barren backdrop. The entire Gue village is visible from the temple complex. The panoramic view of dry mountains on all the sides is picturesque. A small river originating from the melting snow on the mountains flows through the village. There is a small shop in a corner of the temple complex that serves basic eateries. 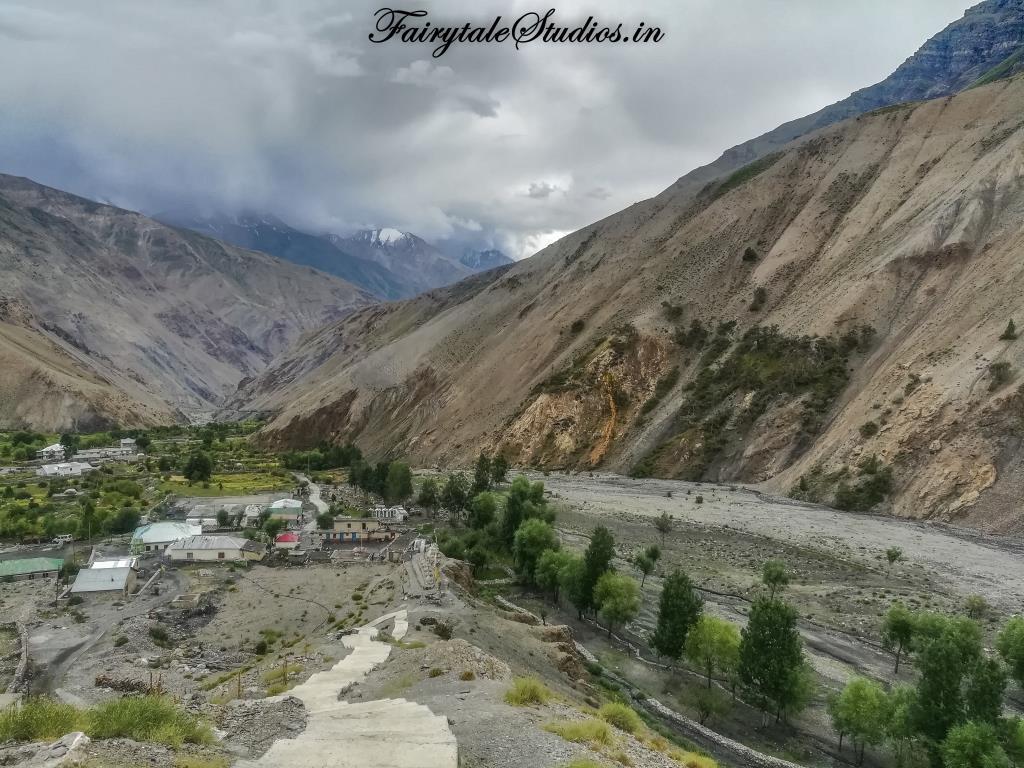 TABO
The village of Tabo is in a valley situated in a bowl-like flat round. It is located at an altitude of 10,760 feet above sea level. Just like other valleys in Spiti, Tabo is surrounded by barren hills and mountains on all the sides. Owing to the increase in tourism over the last two decades, Tabo serves as a pit-stop for tourists travelling to or from Kaza. The village is famous for its 1000-year-old Tabo Monastery and some ancient caves. 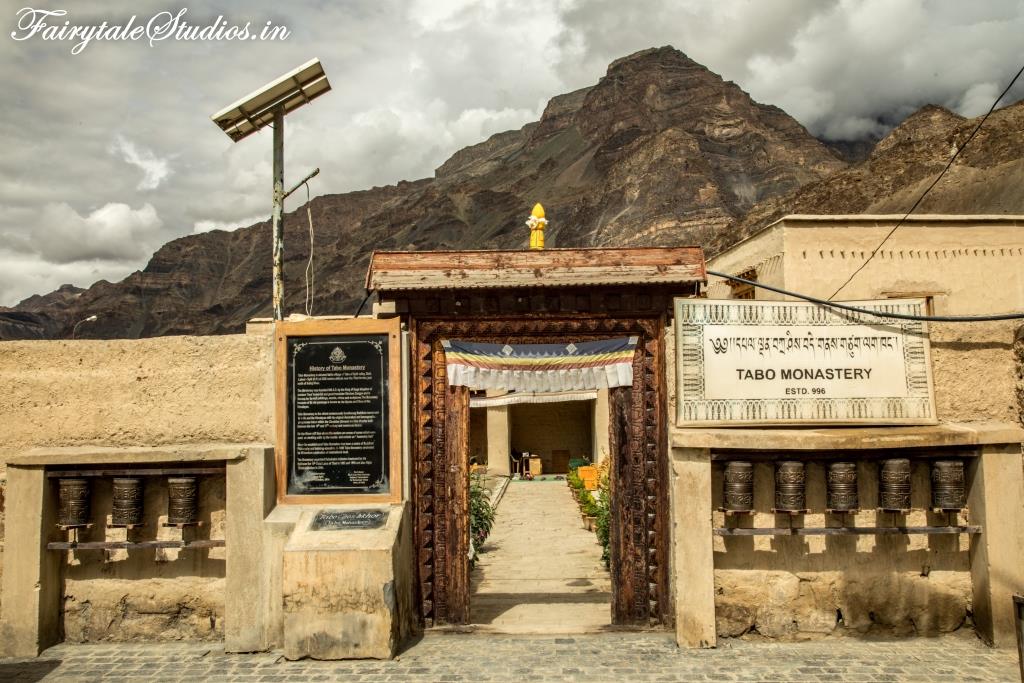 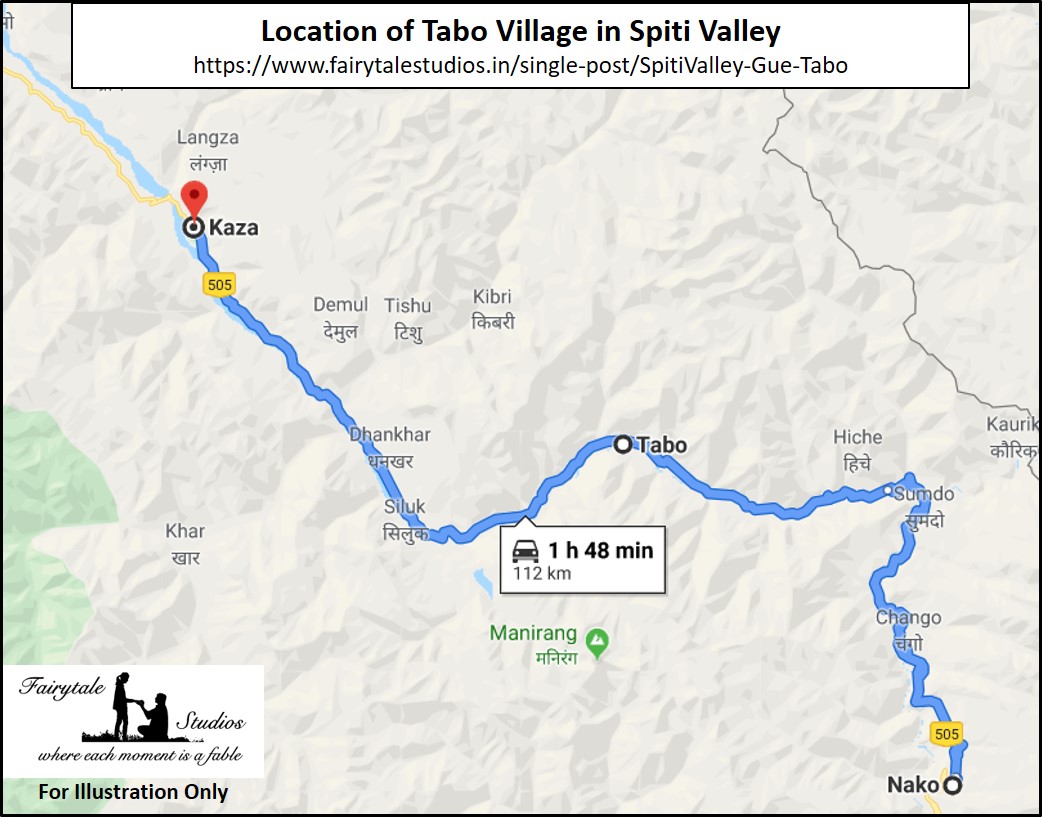 History of Tabo monastery:
Tabo monastery is the second most important seat of Buddhism in the entire Himalayan region after the Tholing monastery in Tibet. It was established in 996 AD by the rulerof Guge kingdom fromwestern Tibet and the great translator Rinchen Zangpo. Since the establishment of Tabo monastery, it has been a centre for Buddhist philosophy and learning. Tabo monastery is famous for its wall paintings, murals, statues and sculptures. Because of these ancient arts, it is also known as the Ajanta and Ellora of the Himalayas. 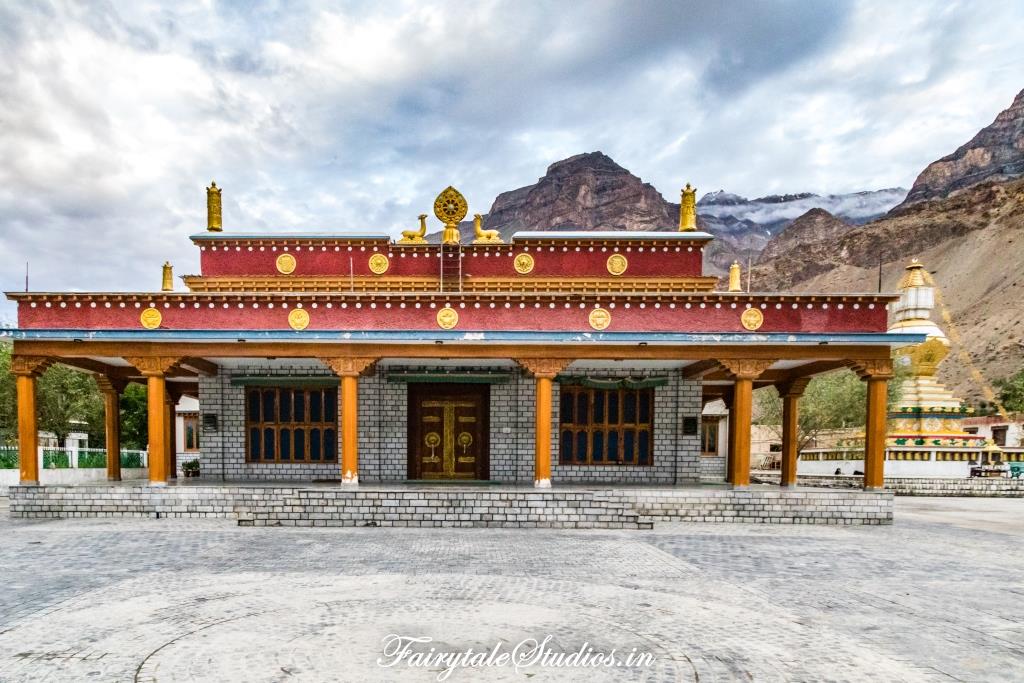 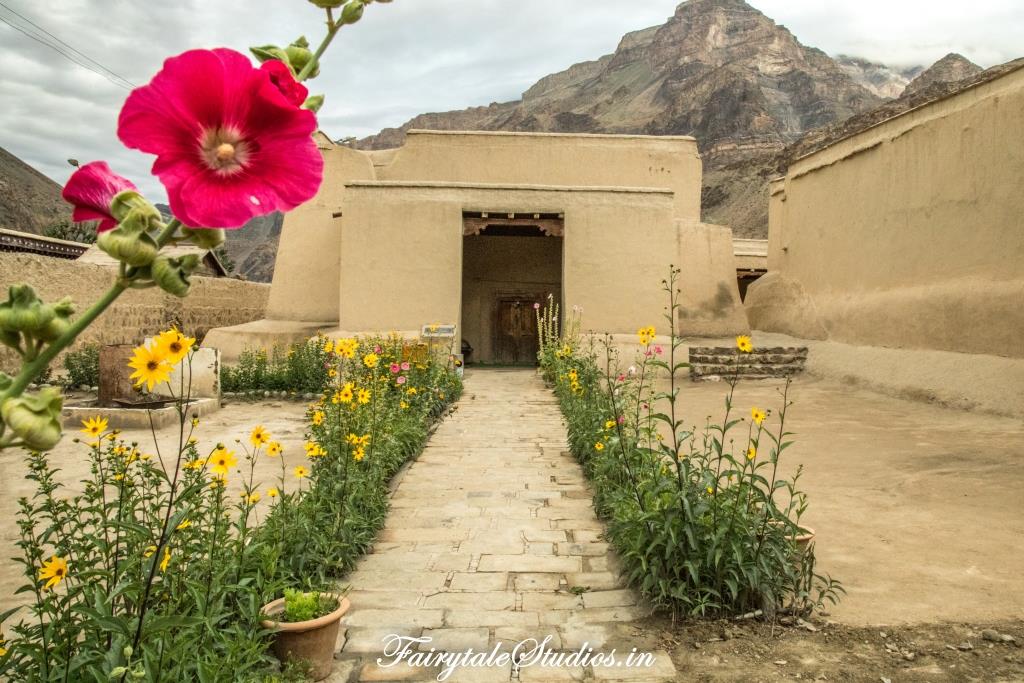 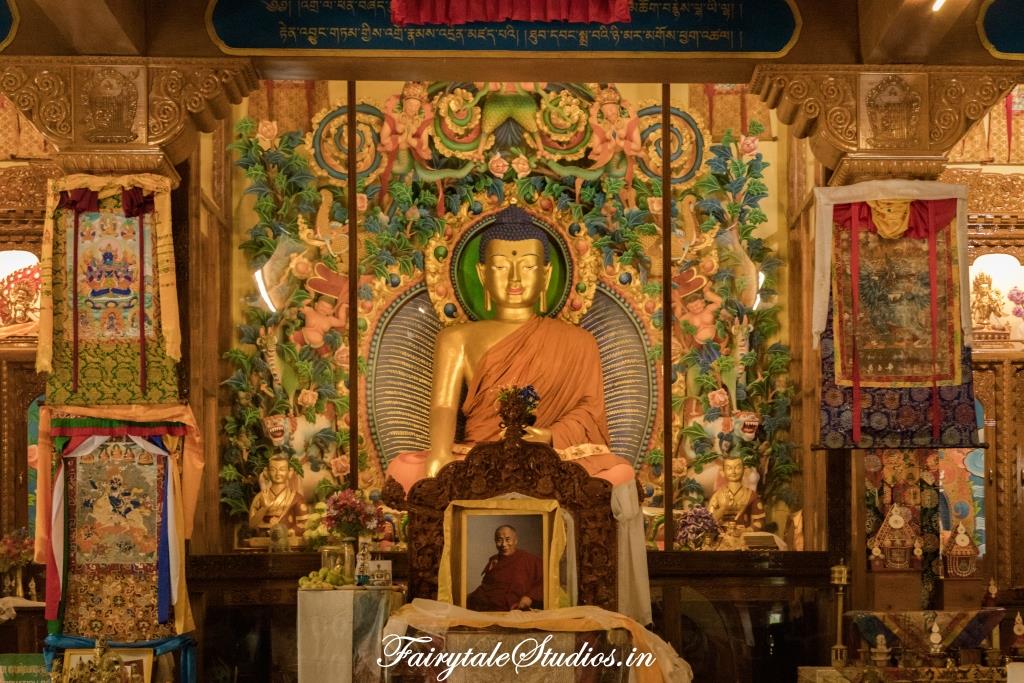 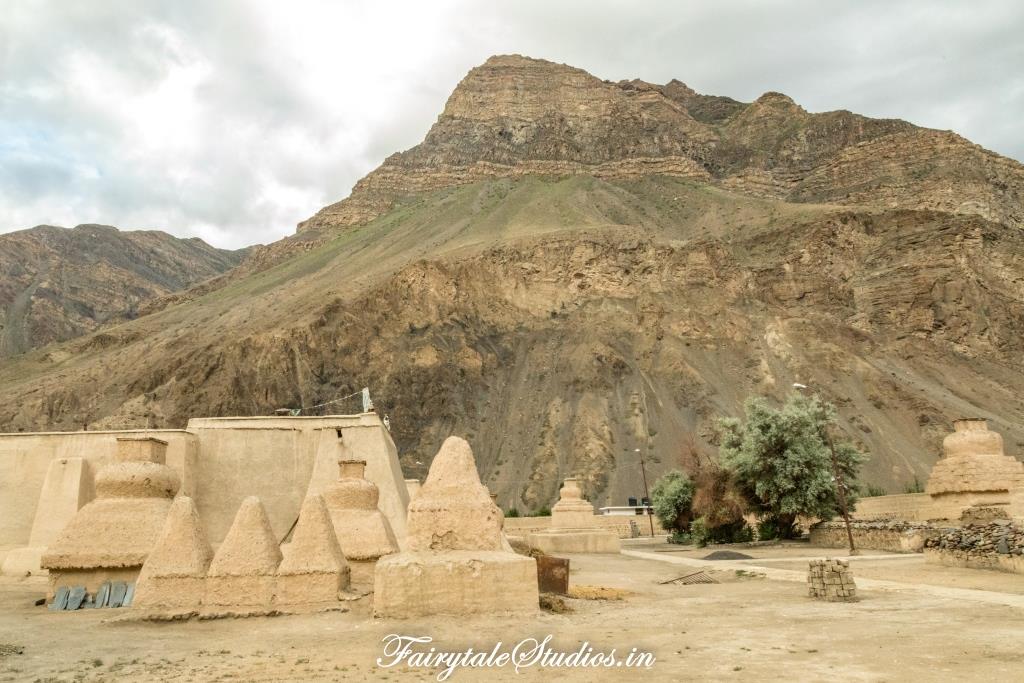 Tabo caves:
Tabo caves are scattered on hills adjoining the Tabo village. These can be easily seen as tiny dots on the hills from the Tabo monastery complex. There is a well-defined trail to reach the caves, however, the entry inside the caves is restricted. These caves are used by monks for meditation. If you see a flag outside a cave, it would mean there is a monk meditating inside and should not be disturbed. Entire Tabo village alongside the Spiti River can be seen from the caves. 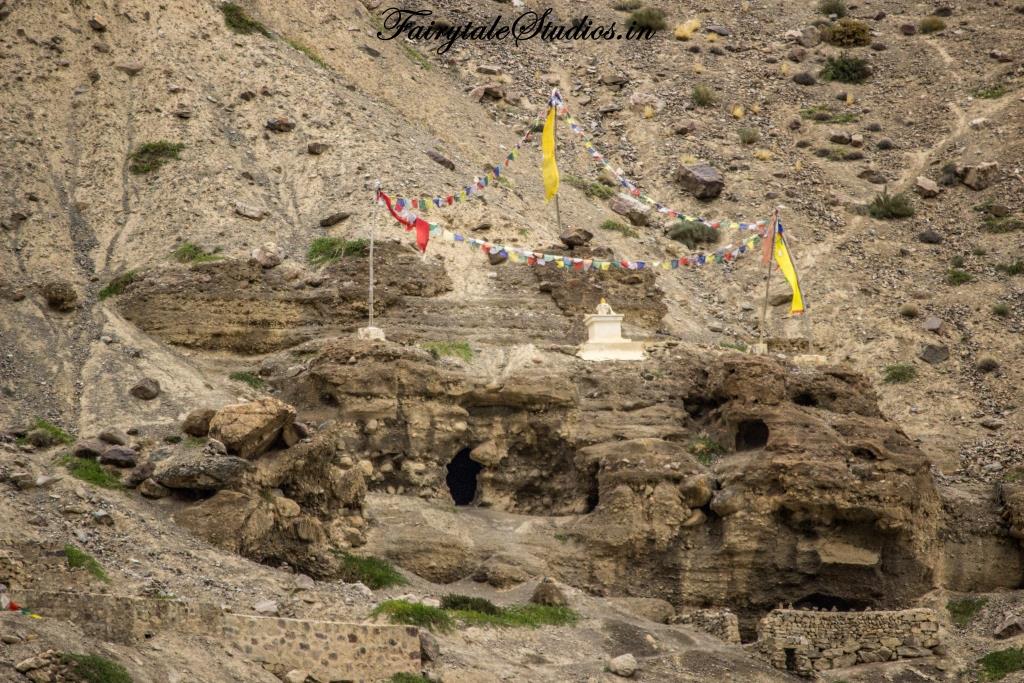 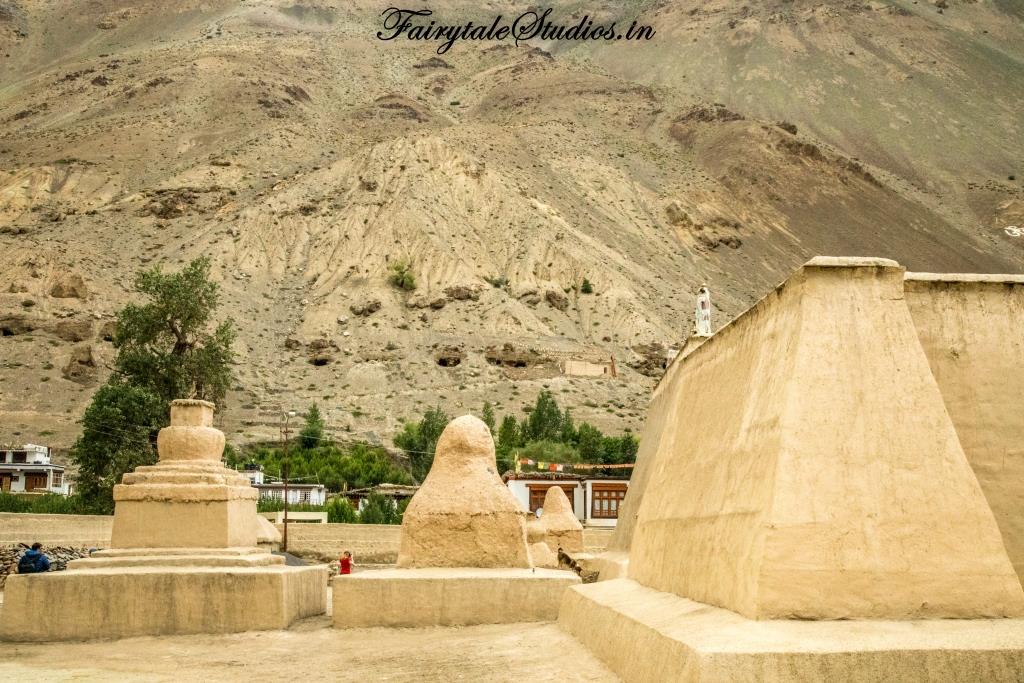 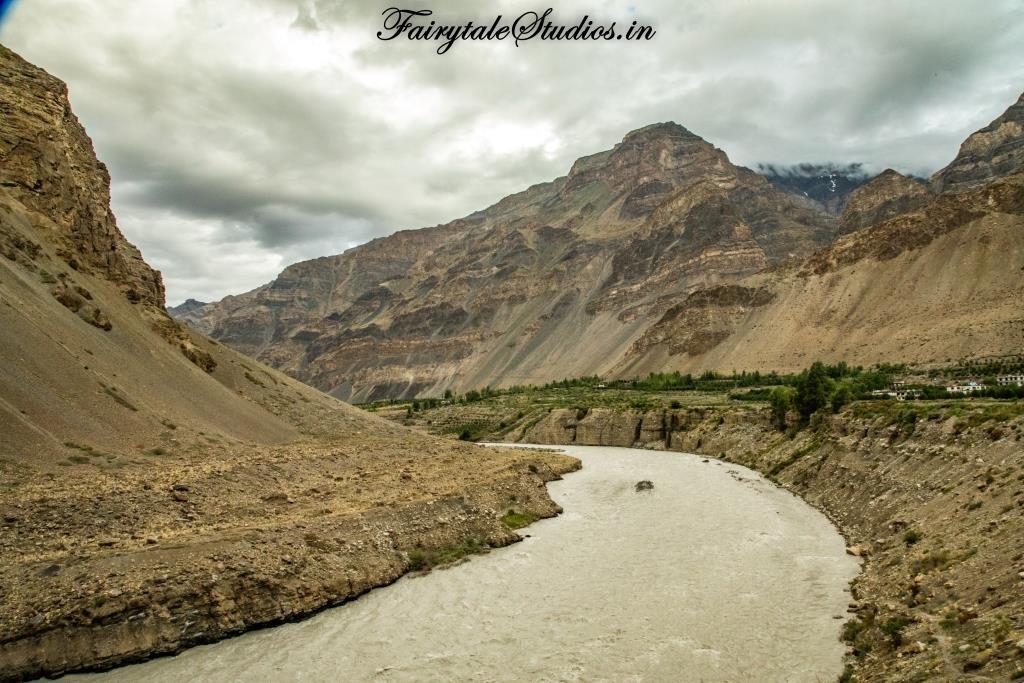 How to reach Gue and Tabo:
There are no government buses that run to the Gue mummy lama temple, whereas the frequency of bus running to Tabo is erratic. Hiring a cab or taking your private vehicle is the best way to reach Gue and Tabo. You can either hire a cab for your entire Spiti Valley trip as we did or take one from Nako village. We booked a vehicle for our trip from Spiti Valley Tours. It is a highly rated travel agency that specialises in trips to Spiti Valley. Their drivers are experienced and know their way around with the locals. Spiti Valley Tours also helped us in charting out a perfect itinerary for our trip by suggesting unique and offbeat places such as Gue. To book your trip with Spiti Valley Tours you can directly contact them through their website.
The best time to visit Tabo monastery and Gue mummy lama temple is from May to September when the roads are clear and the weather condition is pleasant. While Gue is a destination that can be covered as a day excursion on your way to Tabo or Kaza, we highly recommend spending a night in Tabo. Tabo is like a modern town and has several decent guesthouses and homestays.
PIN THESE IMAGES: 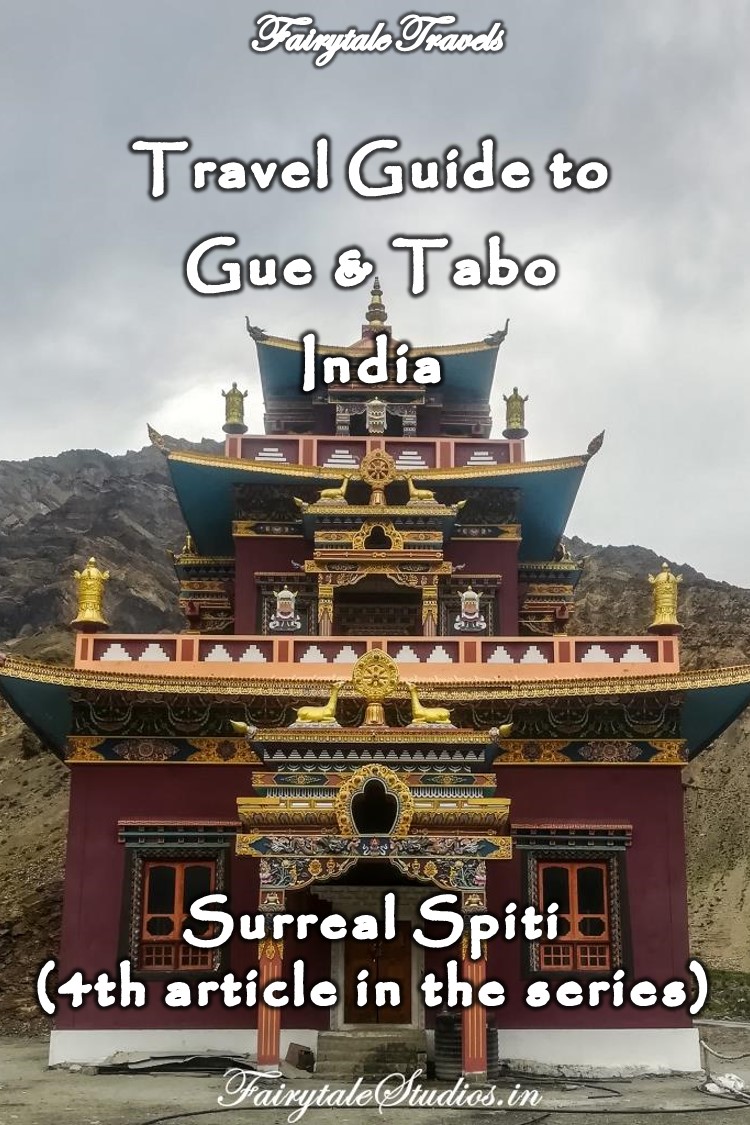 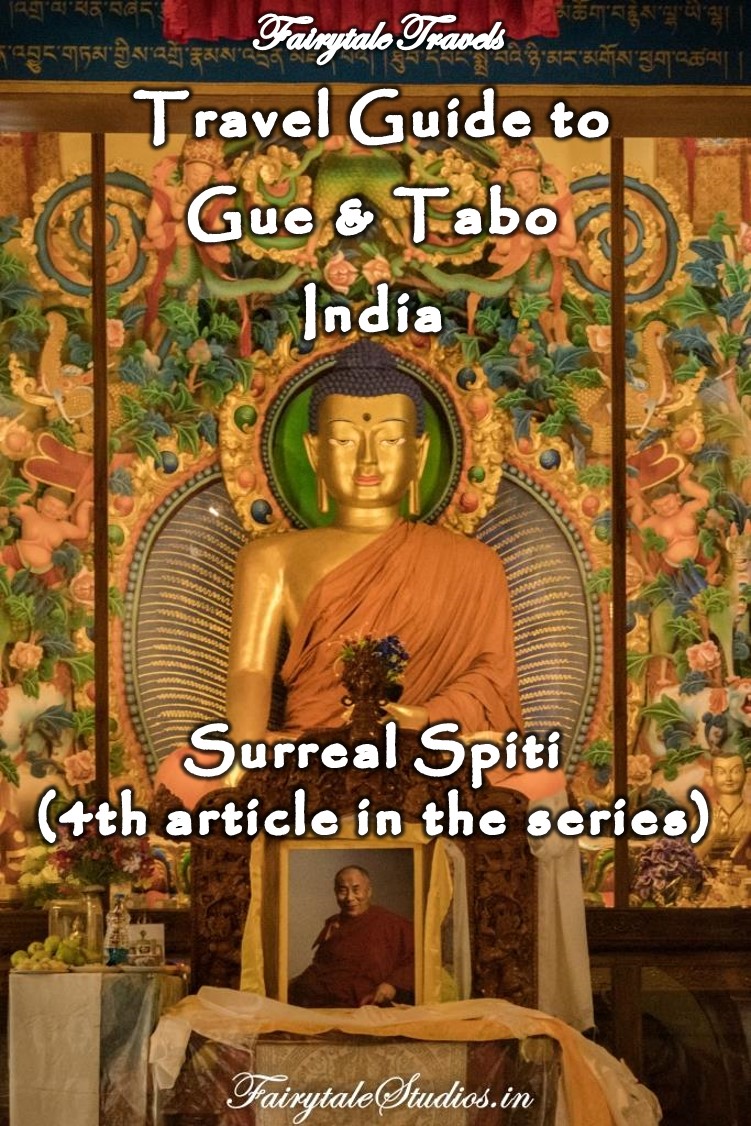 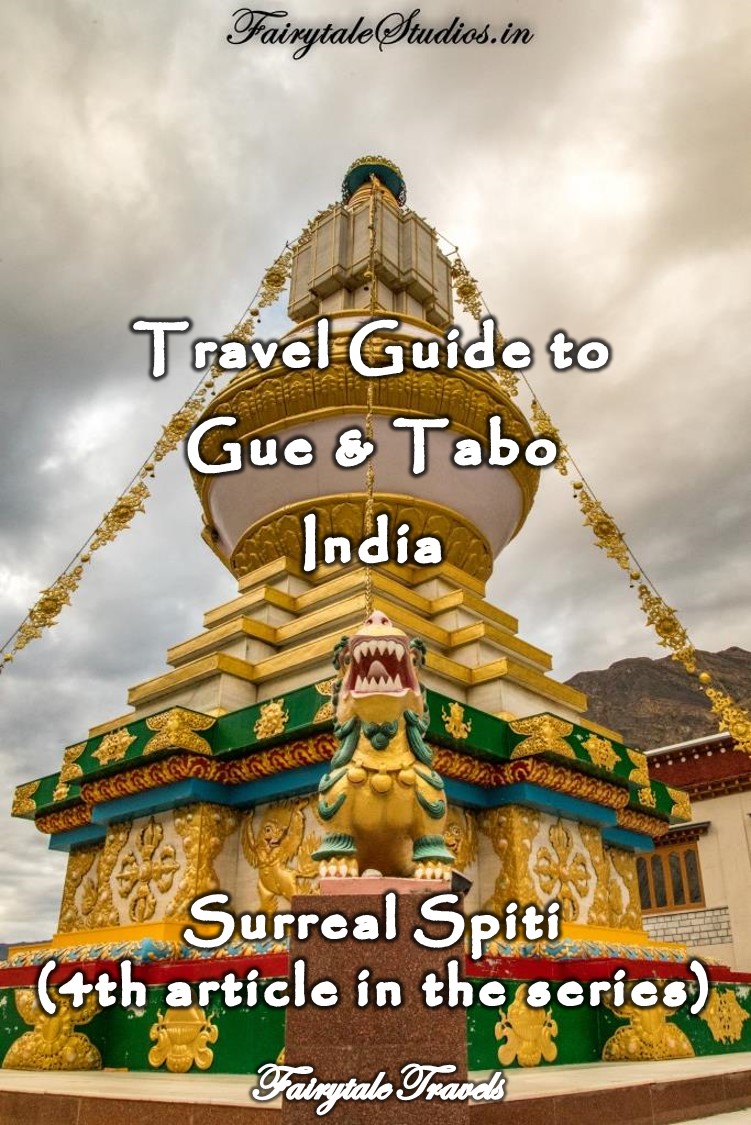 Hope that the above information on Gue and Tabo is of help to you. Kindly drop in any questions you have or your views and opinions in the comment section below. We would love to interact.