Mexico City is the capital city of the Mexican Republic. Ranked number 5 in the top 10 of the world´s largest cities with 21.581 inhabitants. Its nice climate which ranges between 7°C to 25°C makes it perfect to explore at any time of the year. Mexico City has a lot to offer to its visitors, allowing them to explore the culture, sample the amazing Mexican food and to discover the history behind its most iconic buildings, monuments and museums and its colonial architecture.

Mexico City is a megacity, and it would be very difficult to see the most touristic parts in just one day, so at least 4 days are needed to do it justice. Renting a car is not advisable due to the large amounts of traffic caused by such a big population. The best way to explore it is to use the Turibus shuttle (hop-on hop-off). You can buy tickets for one or more days and this is the best way to take advantage of your time there. 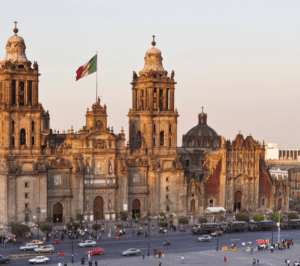 One of the most striking parts of Mexico City is the so-called Zocalo, which is the main square in the centre of the city.  This square was built on the main ceremonial centre in the Aztec city of Tenochtitlan after the conquest. The main buildings are the Palacio Nacional (National Palace), the Cathedral and at the back of the Cathedral we can find the vestiges of the Aztec Empire, which is now a museum called Museo del Templo Mayor. The Templo Mayor is one of the 27 UNESCO World Heritage Sites. In this museum, you can view several objects considered as treasures by the Aztecs, some tools Aztecs used for hunting and for cooking and sculptures dedicated to the gods. The Templo Mayor was the main temple for the Aztecs dedicated to two of their most important gods, god Huitzilopochtli (god of war) and Tlaloc (god of rain and agriculture).

The Cathedral is situated on top of the former Aztec sacred precinct, built after the Spanish conquest so that the Spaniards could lay claim to the land and the people. It is said that Hernán Cortés laid the first stone of the original church. The Cathedral was built in sections between 1573 and 1813 and serves as evidence of the Spanish evangelization during that period. Under the Cathedral, we can even find secret corridors where some priests were buried.

In the centre of the city, a few steps away from the Cathedral, its big orange dome and the white marble of the facade of the Palace of Fine Arts stands out from the rest of the buildings for its striking architecture. The palace has a mixture of different architectural styles, but the dominant styles are Art Nouveau (for the exterior of the building) and Art Deco (for the interior). It has hosted many cultural events including musical concerts, dancing, theatre, opera, literature, and it has also exhibited many important painting and photography exhibitions.

The palace is very well known by its murals painted by Diego Rivera, Siqueiros and other well known Mexican artists. The Palace is a must-see attraction and visiting provides a unique opportunity to admire its stunning internal architecture. 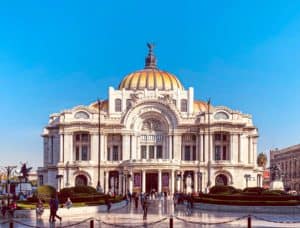 Palace of the Inquisition 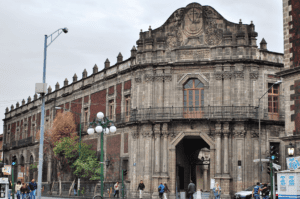 Not far from the Palace of Fine Arts, the Palace of the Inquisition is located in the corner of Republica de Brasil facing the Santo Domingo place. The building was built between 1732 and 1736 during the colonial period to the Mexican war of independence.  The building served as the headquarters and the inquisition trials for hundreds of years.  After the war of independence the end of the inquisition in 1838, the building was put up for sale and it served as a lottery office, a primary school and as a military barracks. Finally, in 1854 the building was sold to the School of Medicine finally becoming part of what is now as the National University (UNAM). The building is now used as a museum of Medicine which includes an exhibition of all the torture instruments used at that time in the Instruments of Torture Museum. The exhibition of the instruments is a must-see attraction as it demonstrates what type of punishments were used on criminals, heretics and even for homosexuals.  The punishment was depended on the seriousness of the case ranging from a pilgrimage to whipping or even death sentence. 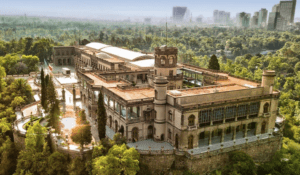 The Chapultepec forest is located in the western part of Mexico City in an area called Miguel Hidalgo and is one of the biggest parks in the City covering more than 1695 acres. The Forest takes its name because it is located on a rocky hill called Chapultepec which is divided into three different sections.  In the first section (the oldest section) there is a lake large where you can hire a pedalboat and admire the view while you relax. The first section also has a big zoo containing different animals such as giant pandas, Bengali tigers, lemurs and snow leopards. In the first section of Chapultepec, you will also have the opportunity to visit the Modern Art Museum, The Anthropology Museum and one of the most iconic buildings of Mexico City, Chapultepec Castle.

The second Section has more lakes and green areas where you can go for a stroll or do some other type of physical activity. We can also find the Papalote Museo del Niño (Children´s Museum). Although the museum is specially designed for children, adults also take the opportunity to go back to their childhood years, enjoying some of the game rooms and learning amazing scientific facts.  In the second and third sections of Chapultepec are landscaped gardens.

The Anthropology Museum is another must-see. The museum is very big and you can spend hours in the different rooms which contain different exhibitions of important archaeological and anthropological artefacts from indigenous cultures. We can also find the Aztec Calendar Stone, which weighs 24, 590 Kg, and the statue of the Aztec god Xōchipilli (the God of art, dance and flowers).

The Castle of Chapultepec was home of the Emperor Maximiliano of Habsburg and his wife Carlotta during the Second Mexican Empire. In the Castle, we find furniture, clothing and some paintings that belonged to the Emperor and his wife during the time they lived there. Before being turned into a Castle, the site served as Military Academy and as an observatory. The Castle holds many interesting secrets during the period of the Second Empire that you can discover during your visit to this luxurious castle. 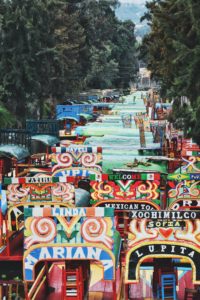 Located in the Southern part of Mexico City, Xochimilco is 26 miles from the Center of Mexico City accessible by car. Xochimilco is very well known for the Chinampas or Trajineras, which are very colourful boats decorated with painted flowers and other colourful designs. The trajineras or chinampas are like rowing boats with the difference that they are ridden by only one person using only a very large stick to push the trajinera and move it throughout the channels. This evokes ancient times when these boats were the most common means of transport in Tenochtitlan city. As this is an open-air attraction, it is highly recommended to visit between March and November when the temperatures range between 15°C and 25°C. While you are taken on a trip throughout the channels, it is very common to find Mariachis in their own Chinampas singing or see people selling flowers and food in their own chinampas. The tradition of selling flowers lives up to the name of this great place, since its name Nahuatl (Xochimilco) means “flower field”. Trajineras are considered to be like floating bars, they are perfect for all types of celebrations like birthday parties or anniversaries. Some people have even proposed matrimony in these boats.

During the day of the dead celebration, the trajineras are rowed at night, people take flowers and light up the trajineras with candles and decorate them with skulls. Some trajineras row to the Island of the Dead Dolls where legends about the Island are told and about La Llorona (The Weeping Woman) who in Mexican cultures is a ghost that roams at night in waterfront areas wailing for her drowned children.

Mexico is a great place to visit as it is a country that has a very rich and diverse culture,  offering lots of amazing attractions and can provide an option for any type of holiday ranging from the tranquillity of the beach to adventurous holidays in the mountain regions.  Mexico has a fantastic climate and visiting this country gives you an opportunity to experience the warmth of the Mexican people and discover its many culinary delights and love of music and dance. Wherever you visit in Mexico, an exciting adventure awaits you.