Although travellers mostly visit Germany for its fascinating history, cuisine, and beer, it also attracts visitors with its bountiful music culture. There are some music museums in Germany that definitely warrant the visit.

Germany is home to a variety of classical Music traditions and its locals are immensely proud of it; young children are often encouraged to partake in playing musical instruments and are taught about it from a young age. Some of the most famous classical composers of Western culture came from Germany, including Johann Sabastian Bach, Richard Wagner, and Ludwig van Beethoven. Pop, folk, and jazz music are also popular, and the country’s impressive ensemble of museums dedicated to music reflects their culture’s deep immersion in the art. 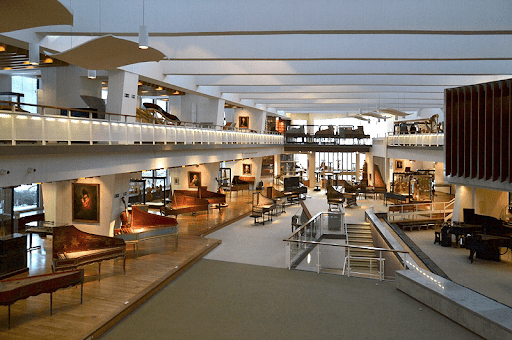 Berlin’s Museum of Musical Instruments is Germany’s National Institute for Music Research and is part of the Prussian Cultural Heritage Foundation. Founded in 1888 at the Royal Academy of Music in Berlin, the museum houses a collection of 3,000 musical instruments from the 16th century onwards and has over 800 on display at any one time.

The museum’s original collection was gathered by music historian, musicologist, and Bach biographer Philipp Spitta and violinist, conductor, teacher and composer Joseph Joachim. It consisted of 34 instruments from the Museum of Decorative Arts, and by 1890 they had purchased hundreds from Leipzig publisher and music dealer Paul de Wi. Over the years, the museum acquired instruments from the private collection of Ghent Attorney César Snoeck, which included old and rare instruments such as a transverse flute, otherwise known as a side-blown flute, and four 17th century harpsichords.

A large proportion of the collection as destroyed during the Second World War, and what remained was evacuated for protection; the museum had over 4000 instruments before the War and was left with only 700 by the time it ended. Since then, the museum has continually improved and added to its collection.

Their current collection is numerous in its variety and contains keyboards, organs, wind instruments, string instruments, and musical curiosities, including the Aeolian harp, a favourite of the German writer Johann Wolfgang von Goethe, and a Rackett, otherwise known as a Sausage Bassoon. The Museum of Musical Instruments also possess instruments owned by famous and influential figures, including Benjamin Franklin’s glass harmonica, a portable harpsichord owned by Queen Sophie Charlotte of Prussia, and flutes from Fredrick the Great’s vast collection. The museum is also home to instruments used to accompany early German silent films, including the largest organ of its kind in Europe.

According to Museums Portal – Berlin, the museum’s most unique attraction is their Naumburger wind instrument collection: “a nearly complete range of instruments originating from a central German city pipers group from 1600. Included in this collection are early harpsichords and spinets, some from the Ruckers family workshop, and the famous Bach cembalo and its replica. Visitors can see a number of delightful items, including stringed instruments from European masters such as Stradivarius, Gagliano, Stainer and Krouchdaler, woodwind instruments from Hotteterre, Denner, Quantz and others”. 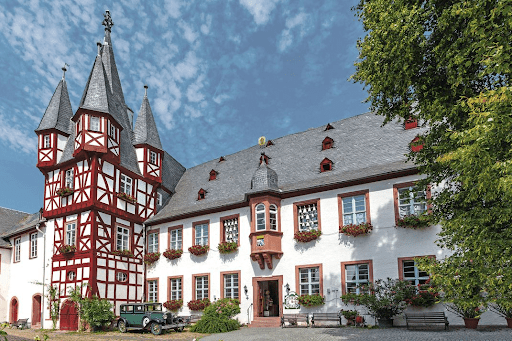 Housed in the Brömserhof, a medieval knight’s 15th-century manor house, Siegfried’s Mechanical Music Cabinet is one of Germany’s more unusual attractions. It is one of Europe’s largest mechanical instrument museums, with over 350 instruments dating back to the 18th century in its collection. It also houses the machines and tools required to create the instruments, providing visitors with a complete insight into the journey these instruments take.

The collection began in the 1960s when German collector Siegfried Wendel had amassed an astounding assembly of clocks – grandfather and wall – and was approached by a young couple who hoped he was interested in buying their polyphon. Invented in Germany in 1870, this unusual instrument looked similar to a grandfather clock but instead of telling time it played music via discs. From then on, Wendel becomes obsessed with procuring and restoring mechanical instruments, which he then kept in his own personal collection.

Today, the collection ranges from music-boxes to harmonipans, from gramophones to bells, and from a chair that plays music when sat upon to a pistol with a singing automaton bird.

Bach House is the historical birthplace and home, now museum, of German composer and musician Johann Sebastian Bach. Hailing from a large family of musicians, Bach was praised in his time for his skills as harpsichordist and organist, and as an expert on organ building. His most famous works – Brandenburg Concertos, The Well-Tempered Clavier, and the Mass in B Minor – are among the best of the Baroque Era, and he is now regarded as one of the greatest composers of all time.

The building was acquired by Neue Bachgesellschaft (New Bach Society) in 1905 and reopened as a museum in 1907. Today, it is the largest museum dedicated to Bach in the world and has 300 original exhibitions, including an autograph. The museum has numerous permanent rooms, most of which have been restored to reflect the house as it was when it was originally constructed in 1456. There are hourly musical demonstrations in the Instrument Hall were 28 original instruments from the Baroque period lie, a biographical exhibit in the largest room in the house, which includes the famously mysterious Bach Goblet, a composing studio, and a collection of books from Bach’s personal theology library.

The modern building adjacent to the museum, built in 2007, features exhibits on how we see Bach today, what we know about him, Bubble Chairs where visitors can listen to Bach’s compositions, and how we play Bach. One of the museum’s most popular features is the Walkable Composition, where visitors can choose from one of fourteen stations to hear musical examples that “explain musical techniques and topics in Bach’s works: polyphony, fugue, basso continuo, tuning, Bach’s parody technique, organ music, cantatas, passion music, secular cantatas, sonatas and suites, concertos, overtures, motets and late works”. 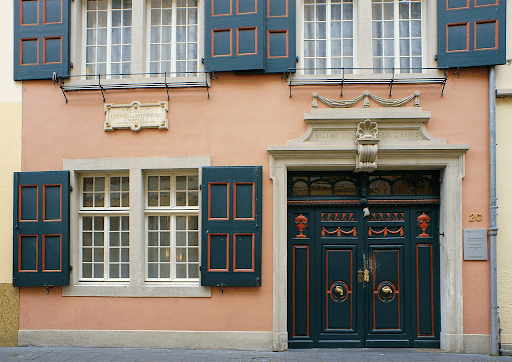 Beethoven House is the historical birthplace and home, now museum, of Ludwig van Beethoven. Born in Germany, Beethoven was a key musical composer during the transition from the Classical to the Romantic period. Like his fellow German Bach, Beethoven is regarded as one of the most impressive and influential figures in the history of music.

Beethoven House has the largest Beethoven collection in the world, and its authentic atmosphere transports visitors back to the 18th century where they can learn about Beethoven’s life and his music. The museum consists of 12 rooms and features over 150 original exhibitions, with displays that include original manuscripts (such as Beethoven’s famous Moonlight Sonata), drawings, photographs, documents, instruments, and memorabilia.

The museum also includes a treasury, a music room where musicians can use old and historic instruments from the time Beethoven was alive, and a garden filled with busts of Beethoven dating back to the early 20th century. 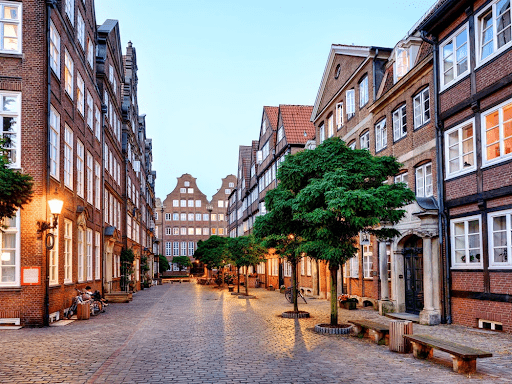 Germany’s Composer’s Quarter is a unique ensemble of museums dedicated to some of the country’s finest composers, most notably those who were born in Hamburg or spent a significant portion of their life there. Each museum is located in a restored historical building and portrays the lives of each composer, and why their work is still important and admired today.

Johannes Brahms was a German composer, pianist and conductor whose work varies across a wide range of musical genres. He is most associated with the intricate and emotional style of the Romantic period and is often considered one of the Three B’s of music, alongside Bach and Beethoven. The Brahms Museum was founded in 1971 and features exhibits about his early life in Hamburg. Particularly notable is the museum’s library, which includes over 300 books, audio recordings, numerous replicas of music notations, letters, concert programs, and other documents, and the table piano on which Brahm provided music lessons.

Georg Phillip Telemann was a German composer from the Baroque period, a self-taught multi-instrumentalist who has become one of the most prolific musical figures in history. Founded in 2011, the Telemann Museum is located in a historical building in the Peterstraße, where Telemann lived and worked from 1721 until his death in 1767. The Museum focuses particularly on Telemann’s personal passions outside music, including his love of gardening, and contains archival material such as original copies of Telemann’s church music. They also have an extensive library with books about musical culture in the 18th century.

Carl Philipp Emanuel Bach, the fifth child of Johann Sebastian Bach, was a composer during the transition from Baroque to Classical periods in Germany in the late 18th century. His style was empfindsamer Stil, or ‘sensitive style’, which is designed to express true and natural feelings. The Carl Philipp Emanuel Bach Museum provides visitors with an insight to Bach’s childhood, the influence of his father and his contemporary composers, and features over 200 of Bach’s original compositions. The museum’s central exhibit is a clavichord, a type of keyboard known to be Bach’s personal favourite to play.

Johann Adolph Hasse was another German Baroque composer who also taught and sang. His musical output consisted of sacred/religious music that was operatic in style. He was a key figure in the development of opera seria, a serious and noble style of opera popular in Italy during the 1710s – 1770s. The Johann Adolph Hasse Museum’s collection consists of “textbooks of his operas (libretti), historical prints of musical compositions, scenic designs and costumes. One piece from the collection is a replica of an opera stage from the baroque era”. His wife, soprano and opera singer Faustina Bordoni, is also featured throughout the museum.

Gustav Mahler is one of Germany’s more recent composers. Born in 1860, Mahler was an Austro-Bohemian Romantic composer and was considered one of the most important conductors of his day. He was a key figure in the merging of the traditional 19th-century Austro-German style and the modernism movement of the early 20th century. Gustav Mahler Museum, established in 2018, has several exhibits relating to Mahler’s work as an opera conductor and a reconstruction of player piano by Welte-Mignon, “which reproduces the composition accurately in the way Mahler intended it to sound”.

Fanny and Felix Mendelssohn (full name Jakob Ludwig Felix Mendelssohn Bartholdy) were siblings and composers. Felix was a pianist, organist, and conductor who composed Romantic pieces for churches and Shakespeare plays, including A Midsummer Night’s Dream, and the Christmas carol Hark! The Herald Angels Sing. Fanny composed over 400 pieces of original Romantic music but, as per the social culture of the times, were published under Felix’s name for many years. The Fanny and Felix Mendelssohn Museum celebrates not only the sibling’s compositions and contributions to music but also their close relationship; it is said they often inspired each other’s work.