UNFORGETTABLE_FACE_OF_RAMAYAN : Bal Dhuri and Jayshree Gadkar as King Dasharatha and her Queen Kausalya

King Dasharatha and her Queen Kausalya were among the best pair on screen and off-screen too.  The husband wife duo Jayshree Gadkar and Bal Dhuri were accomplished Marathi film artistes and had acted together in 8 films including Ramayan TV series. 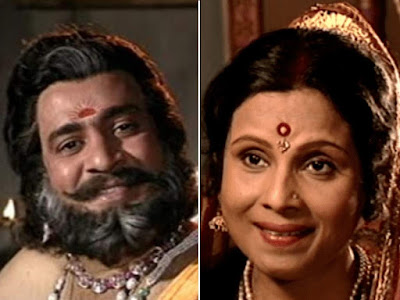 This is in record that Jayshree Gadkar wanted to play Keikeyi when she was already offered Kausalya. Ramanand Sagar, director of Ramayan had said he would give her the role provided she found another actress to play Kaushalya. Well, she never found any. Another incident related to Jayshree, she was not present during the death rites of Dasharatha.
Jayshree Gadkar passed away in 2008 after acting in more than 250 films most of them Marathi and few hindi film that included Saranga (1961), Sampoorna Mahabharat (1983) and Lav-Kush (1967). Bal Dhuri has acted in hindi films like Tere Mere Sapne (1996), Lapun Chapun (2006) and Eeshwar (1989).

UNFORGETTABLE_FACE_OF_RAMAYAN : Bal Dhuri and Jayshree Gadkar as King Dasharatha and her Queen Kausalya