The Internet of Things was a fledgling concept in 2016, but gains steam heading into the new year.

Here are five trends that we’ve been keeping an eye on as the IoT advances the world around us:

1. The IoT has the Power

2016 threw a monkey wrench into renewable energy investments when coal-based power plants discovered that IoT tools could lower operating costs. The improvements are helpful for cities and businesses alike that rely on the benefits of coal power and have even saved some power plants that had to be shut down.

I was nervous about switching therapi…
Can CBD Be Used to Fight Coronavirus …
انواع شبكات الحاسوب واشكالها
What is Google Ads and Types of Ad Ca…
Why B.B.’s is the King of BBQ in Kans…

This news won’t make environmentalists happy, but there is a silver lining. Power providers are claiming that the IoT will gradually reduce carbon emissions and increase creation of new jobs.

DDoS attacks are a personal bane of mine. When I want to play an online game like World of Warcraft, and a DDoS attack is underway, I’m denied my game time. If that isn’t enough to rile you up (or if you aren’t a gamer), DDoS attacks have also been famous for temporarily shutting down the websites of political, religious, and business institutions worldwide; no site is safe. For example, a DDoS attack hit 1600 sites in 2016, and that attack may have been a wake-up call for IoT enthusiasts.

IoT devices can be just as vulnerable as any other system, meaning that many devices that power everyday tech like security cameras and smart devices can be hijacked by black hats.

Additionally, this hints at possible dangers for promising new technologies like self-driving cars. How will the AI in your smart-car communicate with its GPS system if the internet connection is overloaded? Hopefully, we’ll be able to turn our cars off and use manual control if that happens.

I love this disruption because I hate traffic. In Bangkok, the government used IoT sensors during the Songkran holiday (the busiest holiday in the year) that utilized a mobile app to help reduce the amount of congestion on the busy roads.

Traffic reports on the television or radio would become obsolete if more apps like this were available. After all, wouldn’t you rather know about bad traffic before you turned on the radio, maybe while you ate your breakfast?

Looking at my iPhone, I can see a version of this kind of tech already, but it is far from perfect. As the IoT spreads its tendrils onto the roadways, the accuracy of such apps will improve, and traffic reporters may soon be out of a job.

Speaking of mobile devices, have you ever wondered how often you pulled your phone out to send or receive information? The answer is likely ‘a lot,’ but in 2017 you can expect to see ‘a lot more.’ 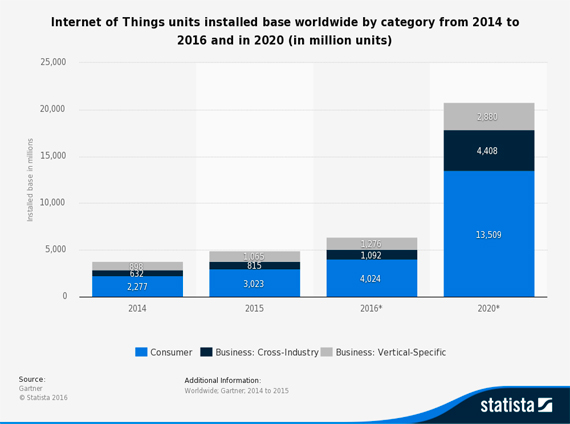 This chart depicts the number of IoT devices installed worldwide. If their projections are correct, we are about to see a huge jump in IoT-enabled devices. For mobile device users, that means that you may be pulling your phone out more often to interact with objects or display AR environments.

For mobile device users, that means that you may be using your smartphone to interact more directly with the world around you.

Building off of our previous point, the IoT is rapidly expanding. New networks will have to be established to support and power IoT devices. In 2016, Sigfox was hard at work launching just such a network, and completion is basically guaranteed in 2017.

It may sound confusing to some. After all, we need to create networks to network our already existing networks. The basic idea is simple, however: everything needs an infrastructure to properly function, including the IoT.

The post Top 5 IoT Shockwaves Sent in 2016; What you can Expect for 2017 appeared first on Edgy Labs.