Letter From The UK: More Fun Than It Should Be

A few weeks ago I made mention of the Ford Focus Active, a very good car that as of right now, America will not get. In the meantime I have been driving the Suzuki Jimny, a small G-Wagen style off-road hero that is taking much of the rest of the world by storm; except the USA.

In 2012 Suzuki announced that it would no longer be selling cars in the U.S. because, frankly, you didn’t want them, and anyway they were not terribly good. Times change and if any brand can be considered to have gotten its act together it is this Japanese company. Masters of producing relatively inexpensive small cars and SUV’s, their current catalogue has a whole range of great vehicles. Taking pride of place among them is the Jimny, described below.

About The Suzuki Jimny

The unashamedly retro-styled Suzuki Jimny has been around in one form or another since 1970, originating as the diminutive LJ10, a car especially noted for its ability to roll over like a fat dog if the steering was used with any enthusiasm at all. The more recent incarnation, the Jimny, is stable, beloved of off-road enthusiasts the world over, and largely ignored by the general public. If, in this modern era, we are still allowed to have fun with cars then the general public don’t know what they are missing.

The Suzuki Jimny is not big and it is not clever. It has the basic technology we have come to expect but no more than that. It is not by any means a highway cruiser. And it would impossible to make love on the back seat unless the participants were double-jointed. What it does have in spades is the DNA of a mountain goat and the crusty performance reliability of Sam Elliott. It offers unrivalled off-road performance for a car in this sector. It will go anywhere and is the equal of the big boys in the muddy playground of the wild blue yonder.

You can’t not love it. 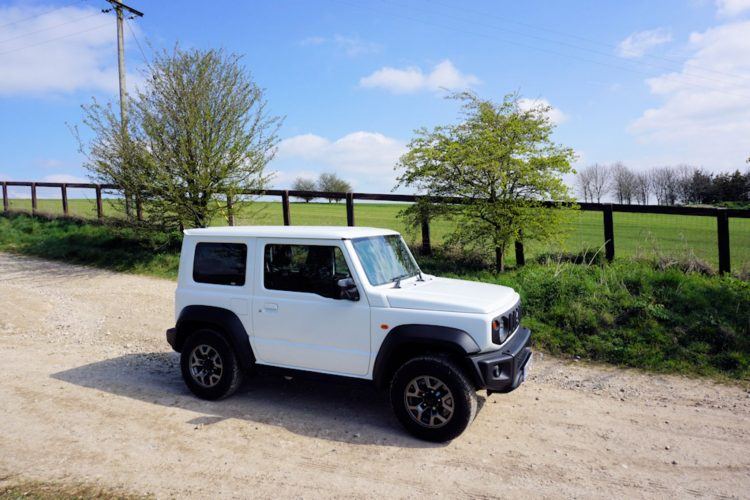 The Suzuki Jimny will go anywhere and is the equal of the big boys in the muddy playground of the wild blue yonder.

Built around a robust ladder frame with a wheel at each corner allowing for three ample body angles (Approach, Ramp and Departure), the Jimny comes with an ‘AllGrip Pro’ switchable two/four-wheel drive system with a low-range transfer gear. Power comes from a 1.5L petrol engine (replacing the laboured old 1.3L) that will take the occupants wherever they want to go. Off-road the car is supremely agile and will deliver the goods when you need it most. Shift to low-range when the going gets really tough for maximum torque and better traction on steep slopes and rough terrain.

This writer has driven the Jimny in these conditions and can vouch for this claim: It’s brilliant.

It is so brilliant that the brand cannot build them fast enough to meet demand. In the UK some enterprising entrepreneurs have bought early examples and are selling them on at a premium. Right now, there is no point in asking the hard-bitten sales staff in the Suzuki showrooms for a discount for cash because they will just laugh in your face. 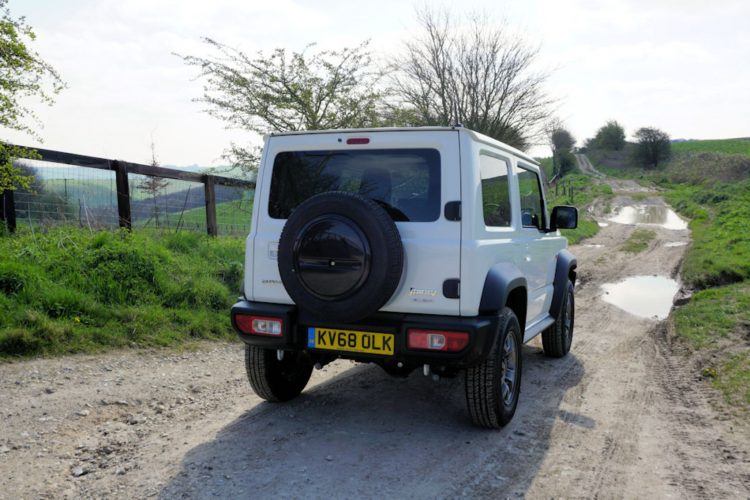 On The Open Road

On the road things change a bit, it has to be said. You simply cannot engineer that level of gnarly, mud-plugging, Goliath-slaying ability without compromise. Emissions of 154g/km or fuel economy averaging around 37 miles per gallon for the manual gearbox (there’s an auto too) cannot match the family crossover or SUV crowd, and the ride can best be charitably described as rugged.

That said, the Jimny could make for a mighty fine, quirky, left-field urban car choice. The small size, high driving position, and chunky proportions all make navigating an urban environment a piece of cake as the Jimny shrugs off speed bumps, potholes, and awkward kerbs (that’s how we spell curbs in the UK) as we would brush away a fly. It is easy to park and, unlike the popular soft-roaders, will not be brought to a halt by a bit of gravel, snow or ice. 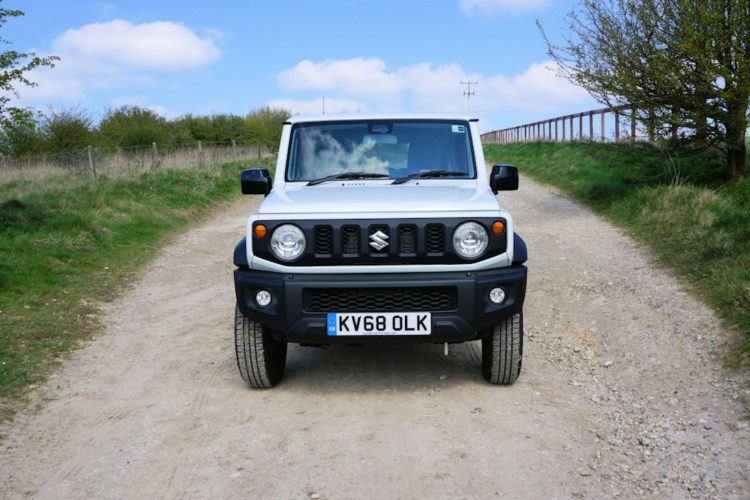 Demand is high in the United Kingdom for the beloved Suzuki Jimny because of its off-road ability.

Although having a slightly shorter wheelbase than the previous model, the space inside has been well utilised – in the front. There’s as much room as any small city car and the hard-wearing interior and simple controls can take a beating. Where things fall down is in the back. The rear seats are fine for children and for adults over shortish distances but the trunk space with the rear seats up is laughable. A decent-sized French baguette and that’s your lot.

With the seats down, there’s much more space for luggage for two. Of course, a roof rack could be used, which would make the car more versatile. There are two levels of trim in the UK: SZ4 and SZ5; the latter having a few more conveniences and connectivity plus alloy wheels instead of the ‘steelies’ on the base model. Prices start at UK £15499 ($20,000). 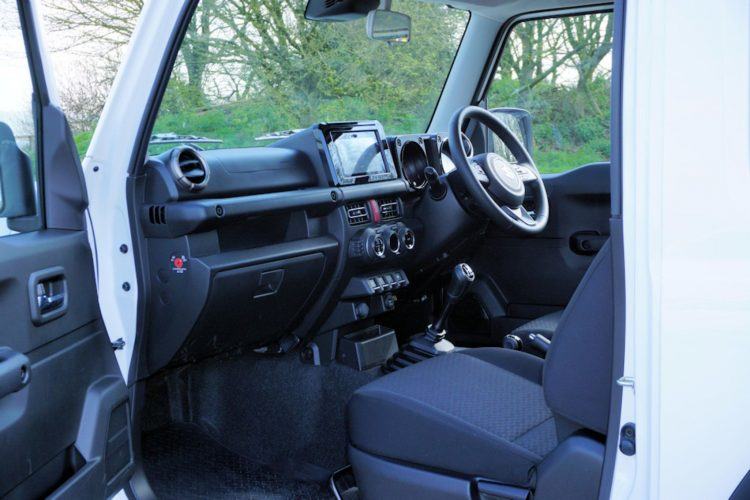 The #Suzuki Jimny is easy to park and, unlike the popular soft-roaders, will not be brought to a halt by a bit of gravel, snow or ice.
Click To Tweet

Why Tell You About It?

Well, The LJ in LJ10, the 1970 original, stands for light jeep. Nothing to do with your legendary spine-breaker of old but the connection is implied as the Japanese sought to get some of that proper Jeep sales action. Then, it was no contest; today it might well be a different story and this brings me to the point.

Times change and our automotive tastes and preferences will vary over that time. I can see a day when, if Suzuki were to return to the States (allowing for import duties, taxes, idiot politicians and the like making it worth their while), F-150 owners would be left wondering why they need that flatbed after all. Owners of the soft, modern Jeeps would crave some of this small, bullish action. This is hard-hat motoring for the millennial generation; this is the car that would take rural-dwelling children to school and then tow a Jeep out of the mud.

The American buying public should clamour for this car because, above all else, it is mechanical auto fun as we all once knew it. Take the rough with the smooth. It’s more fun than it should be. I’ll bet Sam Elliott would approve.

Geoff Maxted is a motoring writer, photographer, and author of our Letter From The UK series. Follow his work on Twitter: @DriveWrite

How Emotions Cloud Judgement: An Introduction To True Empathy

YOU Spectacular 2016: Vote for your favourite stars and WIN

Letter From The UK: More Fun Than It Should Be