Those wanting a compact car with attitude should take a look at the new Toyota Corolla. It’s got a revamped front end that gives it a cool, new sporty look. If you want a safe compact car, the Corolla gets a suite of safety features not typically found in this segment. Add in a dash of Corolla’s excellent fuel economy along with its high resale value, and you have all the ingredients for a car that will please economy conscious consumers.

Over the weekend, we drove the top-of-the-line, 2017 Toyota Corolla Xse.

The Toyota Corolla gets a mild refresh for 2017 with new front end styling, LED headlights, upgraded interior upholstery, a standard rearview camera on all trims, and a bundle of safety features.

Our XSE tester came with the optional Entune Premium Audio ($525) with an integrated navigation system and the Entune App Suite. A TRD Performance exhaust ($649) added a little extra attitude. Total MSRP including destination: $26,101. We slid into the XSE, and saw the most up-to-date cabin ever for Toyota’s compact car. It features a stylish dashboard, a sporty steering wheel, and an automatic gear shifter that fits perfectly into the driver’s hand. We particularly liked the traditional audio and climate controls unlike some that are put in difficult-to-use touchscreen menus. If it takes longer than two seconds to figure out how to change the radio station, it’s too difficult.

When we did need to use the 7-inch touchscreen, it offered up large buttons, clear graphics, and quick responses to touch inputs. It could be one of the easier infotainment systems to operate in this class. You can stay connected with the optional Entune App Suite that integrates smartphone-connected services such as Bing, Facebook, Yelp, Pandora, and real-time traffic data.

The Corolla’s front seats hugged us from behind and provided adequate comfort, particularly with the firmer bolstering found in the XSE. We adjusted the telescoping steering wheel, came up with a comfortable driving position, and were able to see the gauges perfectly. Out back, there’s more legroom than most small compact sedans and headroom is a plus for taller passengers. Trunk capacity is average at 13 cubic feet, but the wide trunk opening facilitates loading and unloading large cargo items. 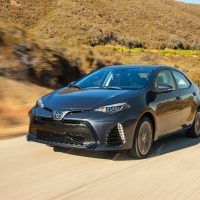 The first time we hit the push button start and powered up the Corolla, we could hear the louder growl from the optional TRD Performance Exhaust. When we pushed hard on the gas, it gave off a distinct exhaust note younger buyers will appreciate. Many go for this in aftermarket shops, but Toyota was wise to offer it from the factory.

The Corolla’s four-cylinder engine is bulletproof when it comes to reliability but it does lack in the performance department. We pushed it hard at altitude but were asking for more power as we tried to pass slower traffic. The CVT automatic gearbox has a distinct rpm drone and the TRD exhaust accentuates the sound even more. We tossed the compact car around the tight mountain curves too – it’s really designed more for city commuting.

On the upside, the Corolla is all about no-hassle commuting comfort and handles the city streets with ease. The Corolla XSE won’t leave you tired after a longer commute and can make the daily grind seem less exhausting.

The 2017 Toyota Corolla XSE offers up a lot for the money. Add in Toyota’s reliability, excellent fuel economy, and the compact’s new sporty styling, and you’ve got a good commuter that will last you for years. If you are looking for safety, the standard rearview camera, forward collision warning, lane departure intervention, and adaptive cruise control are as good as most luxury sedans.

Denis Flierl has invested over 25 years in the automotive industry in a variety of roles. Follow his work on Twitter: @CarReviewGuy 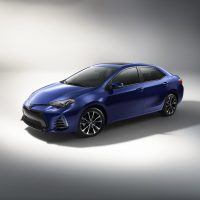 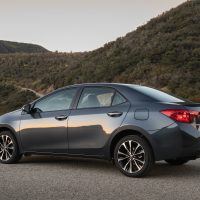 We trust Edmunds.com to give us the best, up to date, and TRUE pricing of what people are really paying for their cars. Get a free dealer quote at Edmunds on this car: