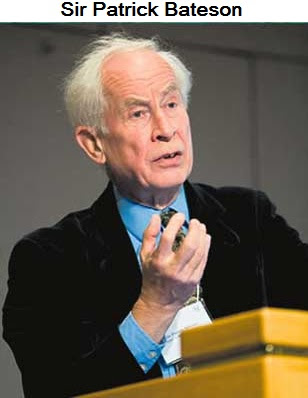 I will be attending the Royal Society Meeting on New trends in Evolutionary biology: biological, philosophical and social science perspectives. I'll post each of the abstracts and ask for your help in deciding what question to pose to the speakers. Here's the abstract for Patrick Bateson's talk on Adaptability and evolution.

Can You be Too Old for Entrepreneursh…
Change your life joining the Wish Par…
أفضل مواسم السياحة في كينيا
Why B.B.’s is the King of BBQ in Kans…
Regularisation of Cryptocurrency is t…

The capacity of organisms to respond in their own lifetimes to new challenges in their environments probably appeared early in biological evolution. At present few studies have shown how such adaptability could influence the inherited characteristics of an organism’s descendants. Nevertheless such effects on biological evolution are likely to have been important and when they occurred accelerated the pace of evolution. Ways in which this might have happened have been suggested many times since the 1870s. I shall review these proposals and discuss their relevance to modern thought.

Part of the confusion here is that Bateson is using "adaptability" in two different senses. I'm curious to see if he makes this distinction clear in his talk.

I don't see anything new or revolutionary here. Apparently his motive isn't to overthrow or extend evolutionary theory but to introduce evolution to nonscientists. Here's what he said in an interview with Suzan Mazur [Sir Patrick Bateson: Zoologists Should Not ‘Hog’ Upcoming Royal Society Evolution Meeting ...

Patrick Bateson: It may be a mistake not to have anybody talking about that specifically at the meeting. But I want to repeat that in organizing the meeting we are focused on a discussion about evolution with our colleagues in the social sciences and the humanities, and we don’t want to blind them with all the details of the sciences.

There’s also a lot of fascinating work going on in population genetics that we’re not going to talk about. Evolutionary biologists will say this is an important part of evolutionary biology, which it is, of course. But it isn’t relevant to this particular meeting.

Suzan Mazur: How will an evolution paradigm shift affect society in general?

Patrick Bateson: I’m not sure we’re going to be talking about a completely new set of ideas, a lot have been around for a while. Frankly, I think some evolutionary biologists have not shed their neo-Darwinist clothing. There are some conservative-minded biologists who still think of the organism as being essentially passive, a view about which I am particularly concerned. However, the overall movement in biology is to integrate different disciplines making it a very lively area at the moment. The molecular biologists are talking to the ethologists, the ecologists to the physiologists, the population geneticists to the paleontologists, and so forth.

I don't know who's going to be at the meeting but I don't see very many molecular biologists or population geneticists among the speakers. It's mostly zoologists and a few philosophers.