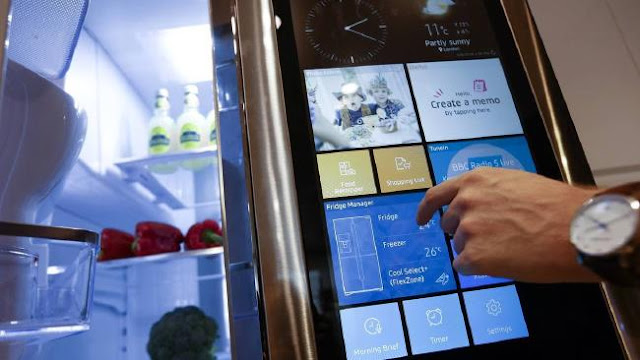 Samsung has declared a partnership with Woolworth in an effort to purchase groceries utilising the Woolworths app directly from the Fridge door. This is in time with the launch of its latest internet-linked appliance of Australia known as the Family Hub refrigerator. This does not seem to be the first linked fridge hitting the market.

Since 2013, LG and Samsung have also been playing with screens on the fridges and from early 2000, the internet fridges have been making headlines. However Samsung intends making good use of the technology by resolving a genuine linked home where the fridge needs food and now your fridge can purchase the food.

If one tends to drop AU$7,499 on a Samsung’s flagship fridge, you would be in a position to order groceries directly from the Woollies app that has now been made more appealing for the Family Hub’s 21.5-inch screen. The user can navigate for items directly or search through recipes by cuisine, tap a tab in the recipe section for ingredients and thereafter tap another tab for shopping on those products.

You could prepare a list on the mobile and later push it to the fridge screen and due to the built-in fridge door camera of the Family Hub; you can view the contents of the fridge from the screen on the door and your phone while you are at the supermarket.

It is said to be a simple interface though not clear how convenient it would be in general experience in making a full shopping list by probing through the grocery option while waiting at your fridge. A search for tomato sauce during a demo had brought about innumerable options.All the same it seems to be a well-designed feature in association with Woolworths eventually bringing in a real-world advantage which would essentially be useful on an associated fridge.

However, in comparison to the original internet refrigerator in 2004 that had a price tag of $17,000 this model seems to be relatively cheaper with the grocery-ordering app on its door. There are three cameras within to enable you to check on its contents before purchasing the food in a store.

Four-Door – Utilised in Controlling Other Devices in Home

The fridge tends to have four-door which can also be utilised in controlling the other devices in the home such as robot vacuum cleaners, playing music or TV shows via its speakers as well as the screen. Jeremy Senior, Samsung Electronics Australia home appliance head had stated that the Family Hub fridge had been designed for huge household having crowded kitchens with little time to plan the grocery shop visits.

He added that there was obviously new tech adopter who would prefer this though realistically, busy families seem to be its audience. In their research, they have seen online shopping and food management seem to be big draw-cards for this type of fridge. Mr Senior also mentioned that the teaming with grocery chain Woolworths had been vital in demonstrating why anyone would prefer to link their fridge to the internet.

Kate Langford, Woolworth’s digital retail general manager had stated that smart fridge owners could bring a grocery shopping list on the fridge and complete the same on the computer or else send it to their smartphone. The Family Hub fridge is said to be available initially as a French door, 671-litre model with a black finish according to Mr Senior.

Top 10 Sites to watch Telugu Movies O…
Sex Tips for Men: How to Be Better in…
Crunchyroll – How to Watch Anime Onli…
Podcasting
Best Low Acid Coffees That Won’t Upse…