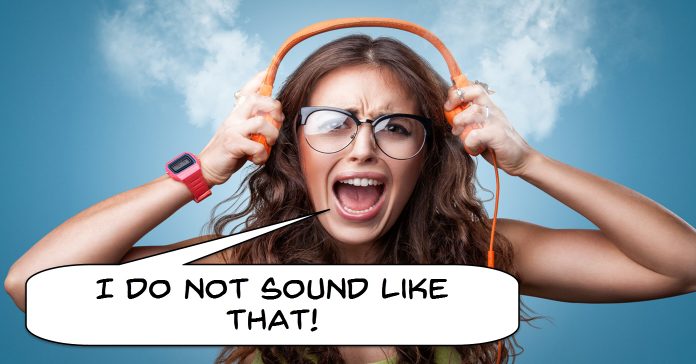 This is something I think everyone can relate to.

For whatever reason or in whatever project you are doing you find you have to create or there already exists a recording of your own Voice.

You play back that recording and as you are listening to it you are horrified by that sound.

You of course are absolutely certain that your own voice could never possibly sound like that and immediately seek to locate the cause of this “problem.”

So you apply way too much bass and probably way too much compression in your audio Editing software yet somehow it never seems to sound how you think it should sound.

You then spend hours on the internet trying to find tutorials or information on the technology of recording because clearly there is something wrong here!

Unfortunately the reality of the situation is somewhat different.

There is only one person in the universe who actually thinks that you sound the way you do… and that’s you!

So the bad news is that there is not a lot you can do about it because in fact that’s the way you actually sound to other people.

The good news is that there is a way to deal with it that requires no software solution or thousands of dollars worth of high audio recording equipment.

The solution is to record your own voice and listen to it… a lot!

Just keep listening to that voice on and on until finally something will happen.

At some point your brain will become so accustomed to that voice pattern along with the knowledge that it is your voice that it will stop freaking out over the difference.

Eventually you will recognize the internal sound of your voice and the external one and the two will learn to live together quite happily.

One of the better advances in amateur video editing software over the past few years has been the introduction of motion tracking.

When this feature first appeared about 5 or 6 years back now it was a purely manual process and could take some time to complete.

It all depended on how long you were tracking an Object or point in a video and how much that object moved around during the video sequence.

Basically the process involved placing a point on the video that you wanted to track along with a keyframe that marked the point.

Then you had to advance the video until that point moved, place a new keyframe, adjust the “point” to the new position and continue.

Sometimes this could take hours and the only way to make sure that the motion path being created as you went along was smooth was by stopping and adding more and more keyframes.

A few years back most of the bigger players in the video editing market like CyberLink and Corel introduced automated versions of this feature.

This was a great addition to the feature because you could select your point and the software would automatically track that point to create the motion path… most of the time!

The downside of this feature is that it has to be able to recognize an object that you are going to track.

If that object disappears for a second or that object changes dramatically the software kind of “loses” it and gets a bit lost.

In this case you have to reset the tracking and continue.

So the video below gives a good outline on how to go about the process in PowerDirector but it is basically the same in any software that has the feature.

Just bear in mind that the example shown is of tracking a very obvious object (the face) which does not move very much.

If you were doing this on something with greater variation in lighting or more erratic motion the procedure would change slightly.

What you would do would be to continue the process through to the end.

Then when you play it back locate the point at which the software “lost” the object, reset and begin again until you had it finished.

Well the 360 video seems to be marching forward with Vimeo announcing this week that they will be supporting the format.

From the outset they will be supporting 360 video up to 8K resolution and for their pro users will be offering a marketplace where footage can be bought and sold.

For the average home user this marks another step in the march towards adoption of 360 video but I still think we are a ways off yet.

Bear in mind that although all the consumer level video editing software is pretty much up to date on importing, editing and even outputting 360 video there are two things still missing from the picture.

The first of these is an affordable solution to capturing 360 footage at a tolerable price point.

I think this one will be the first to arrive and probably within this year.

The second is a platform upon which you can distribute and watch your 360 videos.

Whilst this is effectively in place the result is really nothing more than a kind of clunky playback solution that you can kind of swoosh about in while you are viewing.

The final solution is this footage, streamed by those services into some kind of virtual reality system.

Although there are few alternatives right now for that, it is still some distance from the mainstream.

What is the 180 Degree Rule

One of the rules that you will often hear about in both shooting and editing footage is the 180 degree rule.

Very simply put it is a rule that dictates that when you change the viewpoint of the viewer by changing the angle from which something is shot you have to maintain that same viewpoint.

If you don’t do that then the audience has to mentally adjust for a second to re-orient themselves to the new angle.

Remember that in real life if you were directly looking at the same thing and changing your position your brain would be factoring in that change as you moved.

In that moment of re-orientation your audience is no longer looking at your video even if it causes an interruption for only a split second.

Check out the video for very concise explanation of the rule.

A Mixed Bag of Tips and Tricks

Obviously there is no shortage of “how to” videos and resources on the subject of shooting and editing video on the internet!

The problem has always been that they are all over the place, unsorted and unevaluated.

I think most of us have worked out that just because something is on the internet does not necessarily mean it is true!

So with the purpose of gathering together some good quality all in one place, the link below leads to a collection of some very good videos on the subject.

It covers such things as white balance and filters, stabilization for shooting as well as tips on cutting wind noise and even a little on lighting.

There are also some videos on the specific quirks of shooting video with a DSLR, some shot composition tips, camera movements and even a tutorial on the use of storyboards.

These are all basic subject unto themselves but there is some good info for shooters and editors of every level.