No, PS4 Pro graphics aren’t as revolutionary as SD-to-HD shift

In introducing the PS4 Pro yesterday, Sony compared the addition of 4K resolution and high dynamic range (HDR) to the jump from Standard definition to high definition that took place in consoles a decade ago. After seeing the Pro demonstrated in person after Sony's announcement event last night, however, I can't say the jump in graphical fidelity is really comparable to that SD-to-HD leap.

At its base, the PS4 Pro is just a more graphically powerful version of the standard PS4. The new unit's AMD GPU is capable of 4.2 teraflops, Sony says, compared to 1.84 teraflops on the standard model. That would seem to put the Pro somewhere between AMD's recently launched Radeon RX 470 and 480 PC graphics cards in terms of raw graphical processing power (though differences in PC and console architecture make that something of an apples-to-oranges comparison). The PS4 Pro also sports unspecified improvements to the CPU clockspeed and memory bandwidth over the standard model.

To be clear, there's no single set of standard improvements that you'll always see in a PS4 game running in "Pro mode." Developers have a lot of freedom in how they take advantage of the improved hardware specs to alter the look of their games. As long as Pro Mode looks better than standard mode (while not running at a worse frame rate), it's fine by Sony.

Sometimes, the decision on graphical improvements can be passed on to the players themselves. In Crystal Dynamics' Rise of the Tomb Raider, for instance, PS4 Pro players will reportedly be able to choose between three different graphical modes: one with a higher display resolution, one with a higher frame rate, and one with more detailed visuals at standard 1080p and 30fps (enhanced lighting, shadow, reflections, etc).

Other developers are putting the graphical focus where they think it's most needed. Infamous First Light, for instance, gets a huge boost from the addition of HDR color. After decades spent in the basic RGB color space, HDR makes the game look somewhat hyper-real, with neon-colored particle lighting effects that seem to jump off the screen. The bright orange hair on the protagonist in Horizon: Zero Dawn looked similarly brilliant in HDR.

If you have a 4K monitor or TV, these gameplay snippets give you some idea of what PS Pro's 4K games look like.

Shadow of Mordor, on the other hand, isn't even bothering to use the PS4 Pro to increase the color depth of its scenes (which are full of muted browns and grays, anyway). Instead, the game prioritizes more detailed character models for its crowd scenes and sharper resolutions to enhance close-ups. Without a direct side-by-side comparison, though, it was hard to say that the difference was immediately noticeable. The same can be said for Rise of the Tomb Raider, which was only showing its high-resolution mode at the event.

For all you pixel-counters out there, note that the games Sony showed yesterday don't seem to be rendered in "native" 4K. While the Pro system is capable of outputting full-resolution 4K images and games, it's not really powerful enough to do so while rendering the kinds of realistic 3D worlds with the level of detail we've come to expect from big-budget games.

While some retro-styled 2D or low-polygon 3D games might be able to produce a full 3840 x 2160 frame buffer at least 30 times a second, most games will run internally at a lower resolution. Sony says that the Pro will make use of an internal rendering pipeline and techniques that help fill in those missing pixels on the display. Insomniac CTO Al Hastings said the difference between "native" 4K and the PS4 Pro's output should be "nearly indistinguishable." 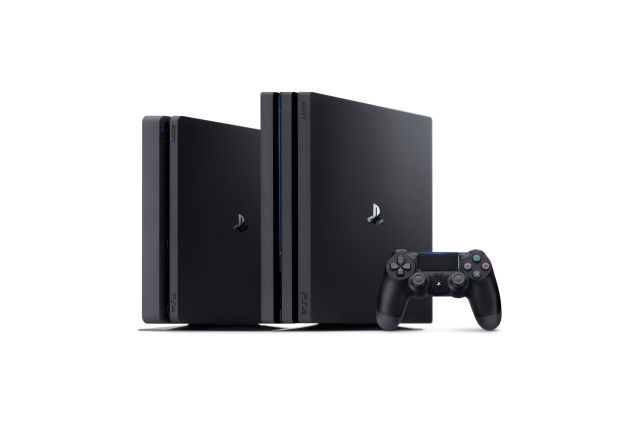 Enlarge / The big brother of the PS4 family.

Full 4K or not, the added resolution certainly helps at the margins. Naughty Dog was showing off Pro-patched versions of The Last of Us and Uncharted 4, both of which were panning between Pro and standard graphics for the demo event. When the scene wiped to Pro mode, you could see less jaggedness on the stray edges of Drake's hair and more detail on some incidental leaves hanging off a distant boulder. These changes were easy to pick out when standing just a few feet away from a 75 inch display, though at longer distances with smaller displays, I'm not sure the resolution improvement will be as useful.

The changes in color depth ended up being much more impactful. Sand on Uncharted's beaches looked extra shimmery and fine-grained in Pro mode, for instance, and the clouds in The Last of Us went from being washed-out white blobs to fluffy masses with depth and shadow. The standard version looked downright dull in comparison—duller than I remember when playing on a standard PS4 months ago, in fact.

Even without a 4K TV, developers insist that the Pro can enhance the graphical experience of PS4 games. In Insomniac's upcoming Spiderman game, Hastings said that standard HDTV owners will see more "temporal stability" (read: steadier frame rates) and less aliasing and noise on the edges of objects, thanks to the supersampling enabled by the extra hardware horsepower.

That supersampling ends up being important in virtual reality, too. Sony was showing off a new, Pro-powered version of Farpoint, a virtual reality shooter we last saw running on a standard PS4 at E3. The PS4 Pro obviously can't add pixels to the PSVR's 1080p displays. What it can do, though, is allow the game to be rendered internally at twice the resolution as on a standard PS4, according to developer Impulse Gear. Even when that extra resolution is sampled down to fit on a lower-res VR display, the result is a much cleaner and more convincing 3D scene, with smoother lines and less overall blurriness.

Sony will wake a sleeping HDR beast via firmware. What else hides in PS4?
All told, it's hard to judge the full impact of the PS4 Pro's power in the carefully controlled environment of the PlayStation Theater's demo space. So far, though, the bump in graphical fidelity seems less like the era-defining console leap of the first HD consoles and more like the kind of marginal improvement you would expect from a console that has to share compatibility with the three-year-old standard PS4. It's too early to tell if that graphical bump is worth the extra money (especially when the HDR improvements will also be available to standard PS4 owners), but right now, we're a little skeptical.

No, PS4 Pro graphics aren’t as revolutionary as SD-to-HD shift