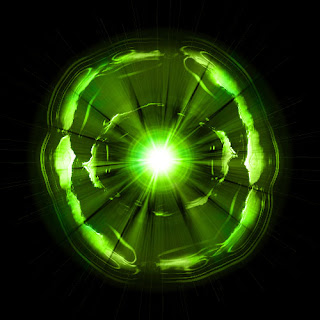 Radioactive Decay is the process by which an unstable atomic nucleus loses energy by emitting ionizing particles or radiation. The emission is spontaneous in that the nucleus decays without collision with another particle. This decay, or loss of energy, results in an atom of one type, called the parent nuclide, transforming to an atom of a different type, named the daughter nuclide. For example: a carbon-14 atom (the "parent") emits radiation and transforms to a nitrogen-14 atom (the "daughter"). However given a large number of similar atoms the decay rate, on average, is predictable.

The SI unit of activity is the becquerel (Bq). One Bq is defined as one transformation (or decay) per second. A Bq is a tiny measure of activity; amounts on the order of GBq (gigabecquerel, 1 x 10.9 decays per second) or TBq (terabecquerel, 1 x 10.12 decays per second) are commonly used. Another unit of radioactivity is the curie, Ci, which was originally defined as the amount of radium emanation (radon-222) in equilibrium with of one gram of pure radium, isotope Ra-226. At present it is equal, by definition, to the activity of any radionuclide decaying with a disintegration rate of 3.7 × 10.10 Bq. The use of Ci is presently discouraged by the SI.

Radioactivity was first discovered in 1896 by the French scientist Henri Becquerel, while working on phosphorescent materials. These materials glow in the dark after exposure to light, and he thought that the glow produced in cathode ray tubes by X-rays might be connected with phosphorescence. He wrapped a photographic plate in black paper and placed various phosphorescent salts on it. All results were negative until he used uranium salts. The result with these compounds was a deep blackening of the plate. These radiations were called Becquerel Rays.

At first it seemed that the new radiation was similar to the then recently discovered X-rays. Further research by Becquerel, Marie Curie, Pierre Curie, Ernest Rutherford and others discovered that radioactivity was significantly more complicated. Different types of decay can occur, but Rutherford was the first to realize that they all occur with the same mathematical approximately exponential formula.