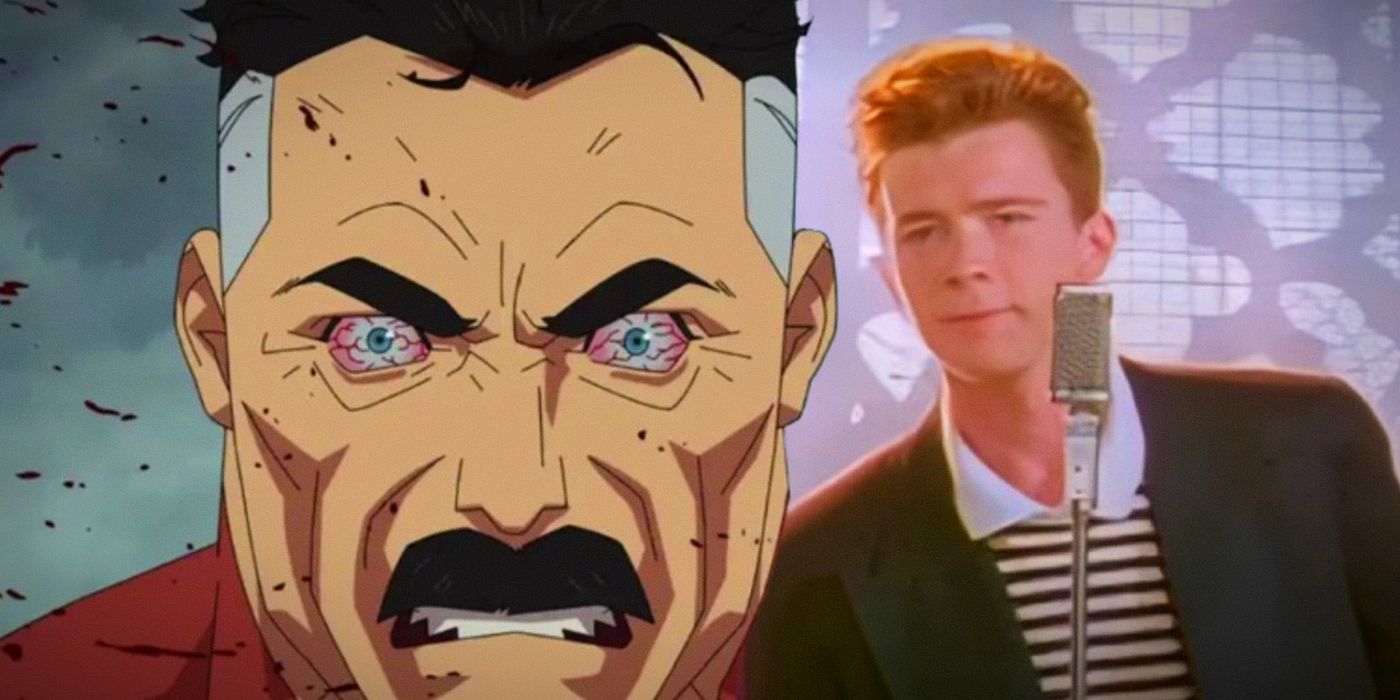 The Twitter account for Amazon’s hit animated series, Invincible, trolls fans by posting an unexpected Rick Roll video to hype up seasons 2 and 3.

The PR team behind Amazon’s hit animated series, Invincible, is having a blast trolling fans on Twitter. The series itself is based on the comic series of the same name, written by The Walking Dead creator, Robert Kirkman. In a similar vein to Marvel’s Spider-Man comics, Invincible follows the story of a high schooler named Mark Grayson (Steven Yeun) as he juggles his high school life with his secret life as the titular superhero, Invincible. However, unlike (most iterations of) Spider-Man, Invincible is unique in that it uses the bright colors and costumes typically associated with superheroes to mask a gory and violent underlying narrative.

While Invincible shares many superficial similarities with Amazon’s other gritty superhero series The Boys, the former sets itself apart from the latter by retaining an optimistic tone bolstered by genuinely heartwarming relationships between Mark and the show’s various secondary cast – most notably, with his Superman-esque father, Omni-Man (J.K. Simmons). Invincible doesn’t ever eschew violence, but it does make sure to return to its hopeful roots by the time the dust settles. The formula proved to be enough of a hit for Amazon to renew the series for seasons 2 and 3.

Related: Why So Many New Superhero Shows Are About Flawed Heroes

Invincible‘s Twitter account is jumping aboard the season 2 and 3 hype by poking fun at fans, leading them to believe that they might be getting early looks at the new seasons. The account recently posted a video of a computer desktop, containing a number of files relating to the show. Two files are labeled “SEASON 2 (FULL EPISODES)” and “SEASON 3 (FULL EPISODES),” both of which the computer mouse ignores in favor of a folder called “SPICY MEMES“ containing the music video for Rick Astley’s now-infamous song, “Never Gonna Give You Up.” Check out the full video below:

Invincible’s Twitter account has proven itself to have a finger on the pulse of the show’s fandom. The account frequently uses popular meme formats and viral trends, most often poking fun at Omni-Man and the various memes that the unhinged Viltrumite inspired. With no release date announced for season 2, the show’s PR team is hard at work at ensuring that interest in the show remains high.

Invincible is one of the more unexpected television hits of the last year, becoming a sensation overnight. With a star-studded cast and an all-star writing team, the show’s success seems like it was inevitable in hindsight. Hopefully, viral stunts such as this one will keep fans talking about the show until Amazon finally announces a release date for Invincible season 2.

More: Everything Invincible Leaves Out About Mars In The Comics

Ray Liotta Says He Never Turned Down Role In The Sopranos

Brendan Kim is an alum of Occidental College with a B.A. in History and Music Theory. During this time, Brendan interned at various nonprofit organizations aiding underserved communities in the Los Angeles area. He is also a lifelong fan of Star Wars and would get a degree in it if given the chance.