After introducing the X7 and Narzo 30 series, Realme is set to launch its next mid-range series consisting of Realme 8 and 8 Pro on March 24, marking the series’s global debut. 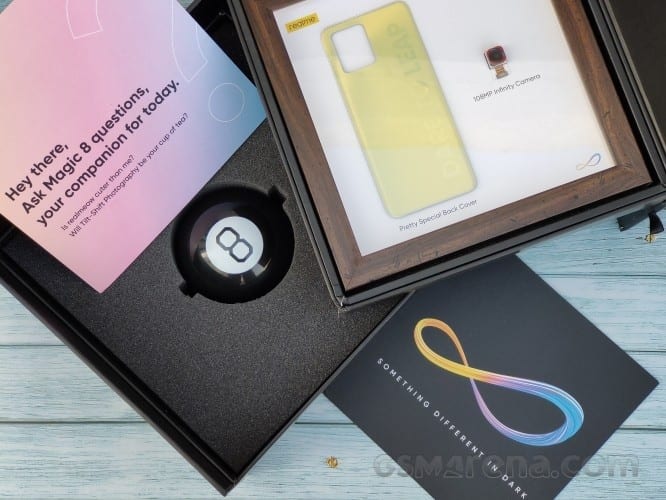 According to some media outlets, Realme has sent over a media invite that comes with an actual 108MP sensor; then there’s a trademark Realme back panel with big “Dare To Leap” text written over it, and for some reasons, it’s called “Pretty Special Back Cover.” It also has a black coloured ball with ‘8’ written on it, a subtle reference to the Realme 8 series.

As far as specifications are concerned, the highlight feature of the Realme 8 Pro will be the 108MP Samsung  ISOCELL HM2 sensor coupled with three other cameras. On the front, it will sport a Super AMOLED display with an in-display fingerprint scanner and will be powered by Qualcomm’s Snapdragon 730 chipset.

Meanwhile, the vanilla Realme 8 will be coming up with a 6.4-inch Super AMOLED display, 5000mAH battery with support for 30W fast charging, and the same Helio G95 SoC found on the last generation Realme 7 will be powering the Realme 8. In the optics department, the vanilla one will feature a 64MP camera accompanied by three other cameras, including an ultra-wide, macro, and depth camera in the rear.

In case you are an impatient one, and you can’t wait till the official launch to have your dibs on the Realme 8. There’s no need to worry as Realme has just started taking pre-orders for its upcoming smartphone through Flipkart, and you can pre-book one for just INR 1080, for which you will be able to claim the smartphone on the next day after the launch along with an assured freebie.