After months of rumours and wait, Qualcomm announced its next top of the line chipset, the Snapdragon 888 at its annual Snapdragon Tech Summit.

Well, Qualcomm skipped its general naming convention for its flagship chipsets. According to that this SoC would have been known as the Snapdragon 885, instead, it’s going with ‘888’, which is considered to be a symbol of fortune and prosperity in the Chinese culture, and maybe Qualcomm wants to change its fortune with its flagship silicon.

The Snapdragon 888 is built on the 5nm, to be precise on Samsung Semiconductor’s 5nmLPE process node, which promises a 20% decrease in power consumption at the same performance compared to Samsung’s own 7LPP node. Another reason behind Qualcomm chose Samsung over TSMC because TSMC is having their hands full with Apple’s A14 Bionic and M1 Silicon. 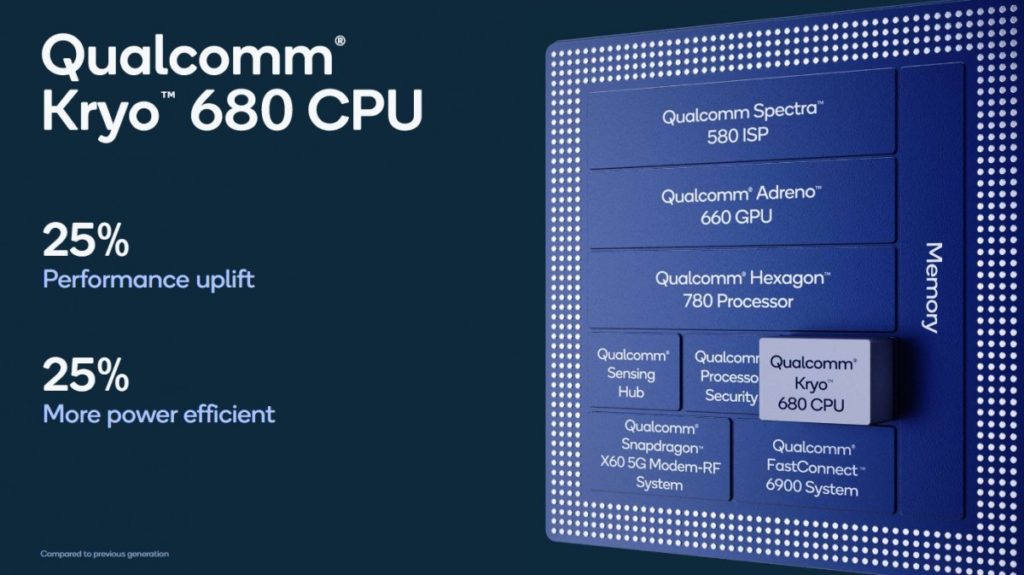 The latest top of the line Snapdragon Features Kryo 680 CPU which is the first CPU out there to use ARM’s Cortex X-1 core along with A-78 and A-55 cores, in the 1+3+4 architecture. There’s a prime X-1 core clocked at 2.84GHz, three A-78 cores running at 2.4GHz, and lastly, four A-55 cores clocked at 1.8GHz. The Kryo 680 CPU promises a 25% improvement in terms of performance and power consumption.

The Adreno 660 is here to handle graphics 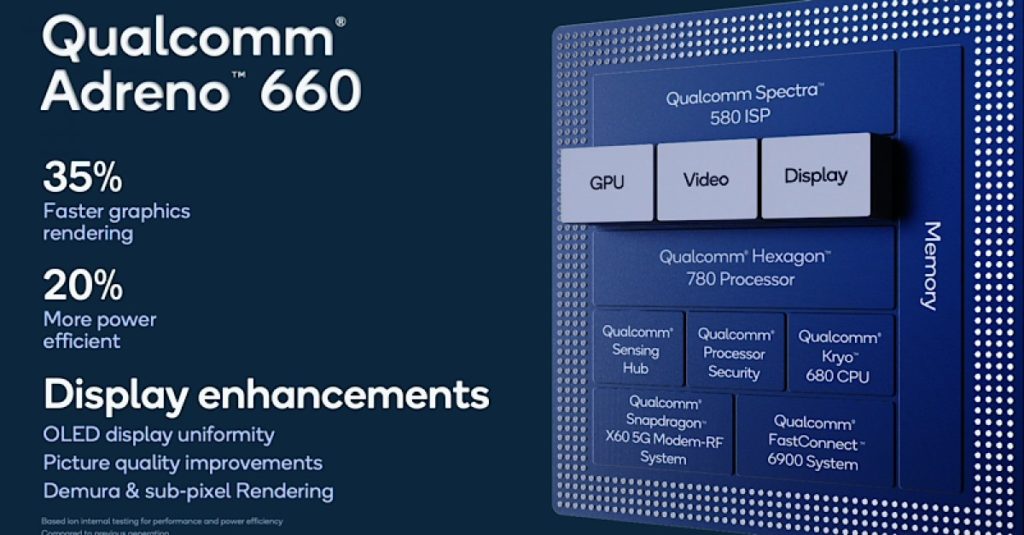 There’s also a boost in graphics performance, with Qualcomm’s new Adreno 660 GPU. The Adreno 660 is said to offer 35% faster graphics rendering as compared to the last generation Adreno GPU along while increasing its power efficiency up by 20%. The Adreno 660 brings some display improvements in terms of OLED display uniformity, picture quality improvement, and Demura and sub-pixel rendering.

The Adreno 660 brings some key improvements for gaming such as reduced touch latency which Qualcomm’s call Qualcomm Game Quick Touch which is said to reduce the touch latency by up to 20%, and it will work with any game you’ll be playing on your Snapdragon 888 powered smartphone.

Qualcomm is also bringing the Variable Rate Shading (VRS) under its Snapdragon Elite Gaming software which was until now limited to high-end GPU’s and console. So, VRS helps to reduce GPU workloads while providing significant enhancements to the game meaning that now the games will run much smoother than before even at higher resolutions.

Snapdragon 888 features Qualcomm’s third-gen X60 5G modem, and unlike the last year’s 865 it is integrated with the system forcing OEMs to get the 5G modem separately rising the cost of flagships in 2020.

The third-gen 5G modem offers the support for both mmWave and sub-6 standards just like its predecessors but with improved downlink speeds of 7.5Gbps for mmWave and 5Gbps for sub-6GHz standard, and the uplink speed of up to 3 Gbps. The X60 also brings support for Global 5G multi-SIM.

A 35% performance improvement over the last year’s Spectra 480. 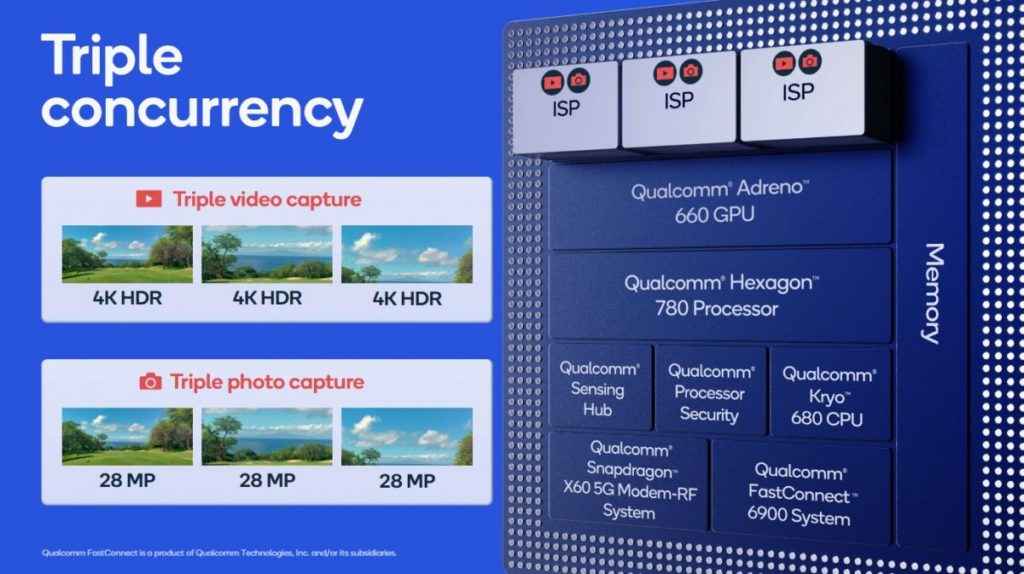 The other use case of Qualcomm’s triple ISP is staggered HDR image sensors, as the new ISP can process images having different exposures simultaneously.

The new ISP is capable of recording 4K videos at 120fps while clicking 120 images of 12MP in a second. It can capture 10-bit HDR images in the HEIF format.

Qualcomm’s 6th generation AI engine features the latest Hexagon 780 DSP which according to the chipmaker has been redesigned from scratch. The new AI engine is said to deliver 26 TOPS (trillion operations per second) of performance while increasing the performance-per-watt by 3x.

The Sensing Hub has also received an update and now it can operate at under 1 milliamp handling more tasks than its first generation. Now, 80% of the AI tasks get processed by the Sensing Hub instead of waking up the Hexagon.

Much more Secure than ever 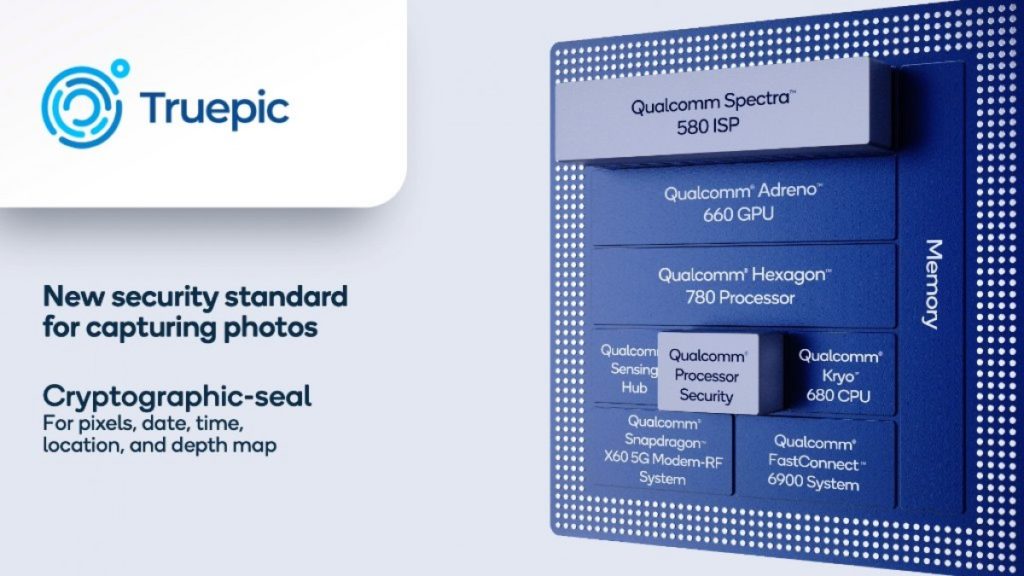 Speaking of security, Qualcomm has focused a lot on it this time. The Snapdragon 888 is the first Content Authenticity Initiative (CAI) compliant SoC, which means it can capture cryptographically-sealed photos. 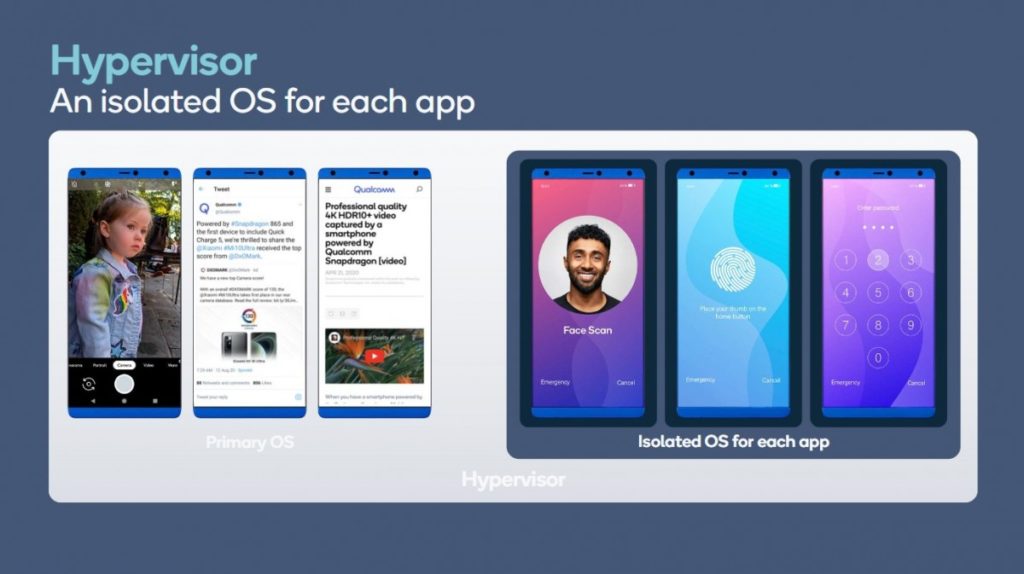 The Snapdragon 888 features the Hypervisor, which allows different OS’es to run on the same hardware separately unaware of each other. It gives each app there isolated operating system with no chances of compromises. 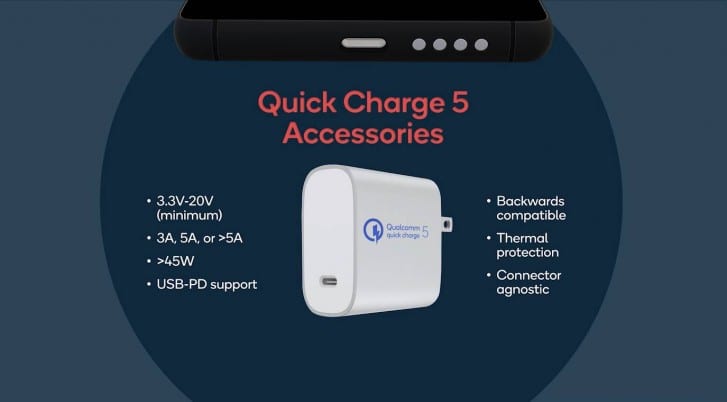 Well, this was not the main highlights of the event since Quick Charge 5.0 has been around for a quite long time, and the Snapdragon 888 features it, which means you will be seeing a bunch of smartphones in 2021 having 100W+ chargers.

Xiaomi’s M11 will be the first Snapdragon 888 powered smartphone

A bunch of OEM’s have announced their partnership with the Qualcomm for the latest Snapdragon 888 including OnePlus, Asus, Realme, LG, Oppo, Vivo, Meizu, BlackShark but it seems “I’m glad that our new flagship smartphone Mi11 will be one of the first devices with Snapdragon 888,” says Lei Jun, CEO of Xiaomi like Xiaomi is going to be the first one to use it.

“I’m glad that our new flagship smartphone Mi 11 will be one of the first devices with Snapdragon 888,” says Lei Jun, CEO of Xiaomi.

Stay tuned for more coverage on the Qualcomm Snapdragon 888