Watch Dogs Legion Review – You Really Can Play as Anyone, and That’s Fun!

Watch Dogs is one of Ubisoft’s weirdest franchises, with each entry being vastly different in tone but carrying the same core gameplay mechanics. Watch Dogs Legion is the 3rd game in the series, but if you haven’t played the previous games, that’s alright since this one really doesn’t require much priot knowledge to start off with.

5 Foods to Avoid in Your Diet for Bet…
CBD Dog Treats, How To Make CBD Dog T…
Life at 57 - Where I'm At
pet Teepee Cat Bed House Portable Fol…
Understand You

The primary staple of the franchise has been its gameplay which consists of hacking anything and anyone. Set in a gorgeous recreation of London, Watch Dogs Legion sees the rebel DedSec group fight against Albion, a private military organisation which has managed to take control of London. Anatagonist organisations from previous games like Blume corporation are still present here, but Albion is treated like a wholly new threat with ties to Blume and other criminal collectives in the city. The game provides a unique gameplay element – letting you play as anyone in the city. And by anyone, Ubisoft really means anyone. So let’s start there, shall we? 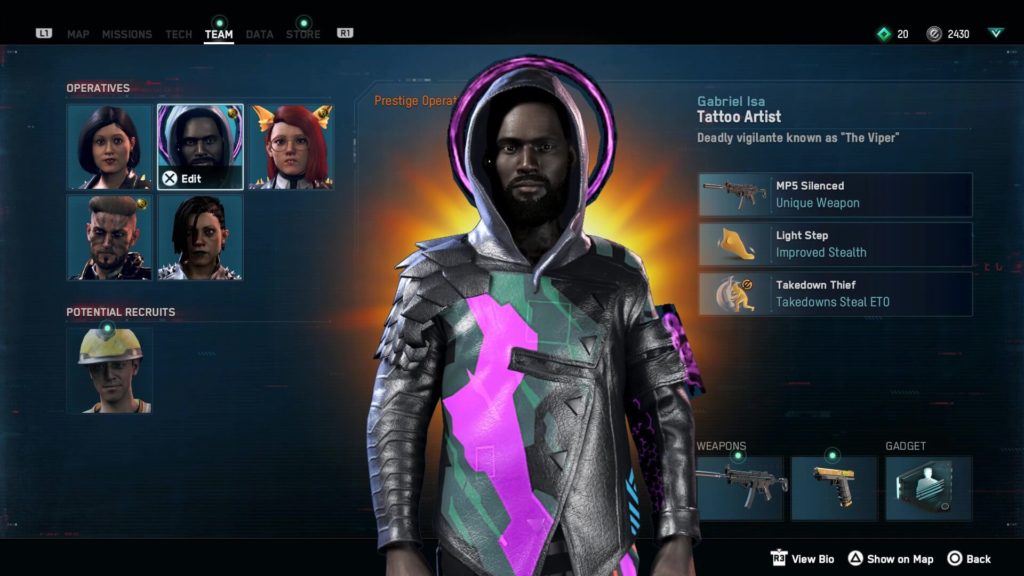 When Ubisoft first revealed Watch Dogs Legion to the public last year, many were sceptical of the promise of “Play as any NPC” that the developer was making. After all, this hasn’t really been done ever in the history of gaming, where NPCs have always been looked upon as just that – Non-Playable Characters. Watch Dogs Legion twists that idea on its head, making every Londoner that you can see recruitable in one way or another. The game still follows the same set story, but each character you recruit comes with their own (kinda) unique backstory, occupations, and with it- unique abilities.

What seems like just a gimmick isn’t any more, with the recruitment system being the main crux of the game, not hacking. In fact, about 90% of the gameplay remains the same as it was in Watch Dogs 2, it’s just melee combat and recruitment system which see some changes. And that’s about where I stopped getting amazed when I realized that the core gameplay is almost the same as Watch Dogs 2. In fact, in some ways you might even say it has regressed.

For starters, there is no ability tree. You can buy ‘abilities’ and gadgets from a certain set that the game presents, and you use in-game experience points (ETO) to unlock them. ETO earned in the game isn’t much, so you won’t be able to unlock everything as fast as you might hope. While this keeps the sense of progressions steady and in your control, it still feels a little gimped compared to previous installments.

Melee combat has gotten an uplift, and you can now counter enemies with more control. You get 3 moves – punch, dodge and a ‘break stance’ move which reminded me of prior Assassin’s Creed games. These certainly provide more control compared to the previous games where hand-to-hand combat was just an afterthought. 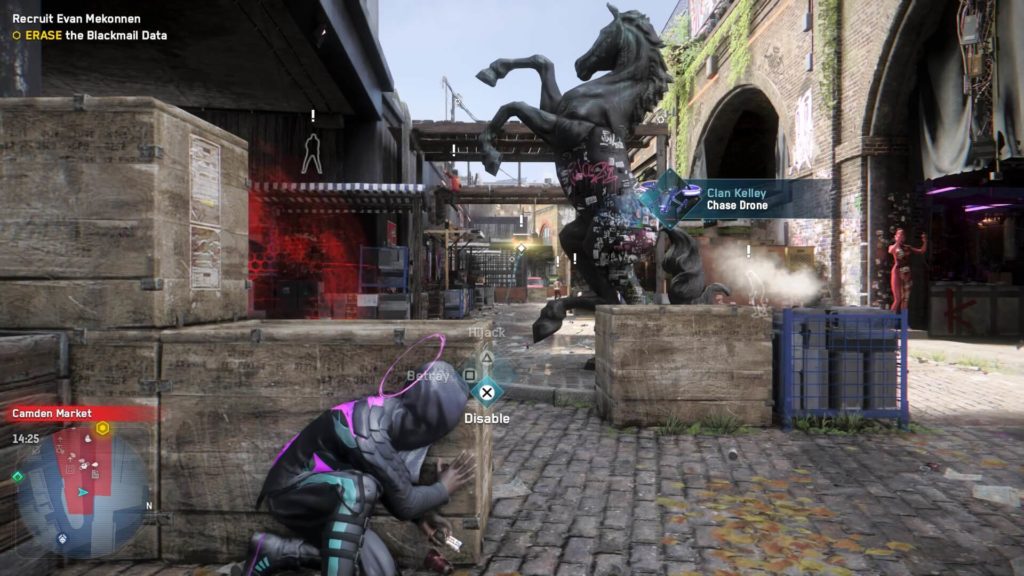 Hacking remains pretty much the same. You’ll still be using one button to profile people and hack security camera, drones, cars, traffic, elevators, etc. In fact, drones were the most hackable object in the game, since this dystopian London has them in abundance. There are multiple types of drones, from simple security cameras to full on turret-weilding combat drones. With the abillity tree you can get upgrades to hack certain types of drones and take control. Boosting that further certain character types might come with their own personal drones that you can call upon when playing as them. This changes the way you approach a mission heavily, as you can switch to another operative easily as long as you’re not in combat or inside a restricted area.

However, the gameplay loop is something you’re either on board with or not, just like any other Ubisoft open-world game. If you start feeling bored out of it a few hours in, then don’t count on the game’s story to reinvigorate that interest. 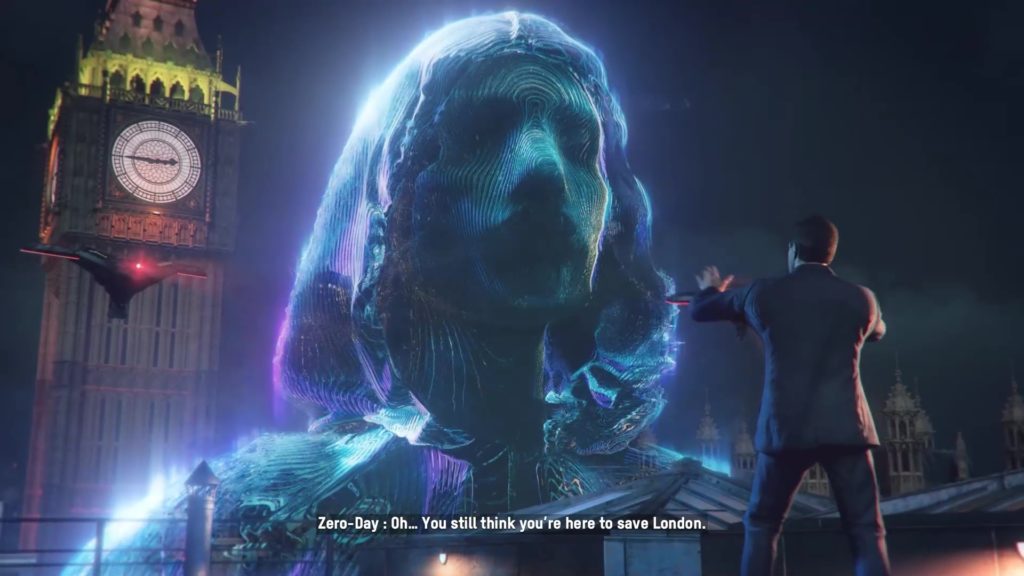 Watch Dogs Legion follows a similar premise as the previous 2 games : A group of rebels (DedSec) fight against an evil organisation (Albion) which uses technology to control society. Pretty generic you say? Well, I wouldn’t blame you. If you remove the “recruit anyone” part of it, then this game’s basic premise remains quite predictable. However, thanks to some decent quest structure and a jolly good AI companion, it kept my interest long enough to complete the 20-hour story.

Let’s start with that AI companion – Bagley. At the start of the game, Dedsec is framed by “Zero Day”, a mysterious person/organisation, to have bombed many of London’s locations. This leads to Deadsec going under, and it falls upon Bagley to start recruiting people and bringing Deadsec back online, with a former member Sabine helping behind the scenes. Let me just say this right now – Bagley quickly starts off as my favorite character, and the stays that way until the very end. He’s like your own personal JARVIS, mixed with a little bit of Claptrap and the robot from Portal 2. 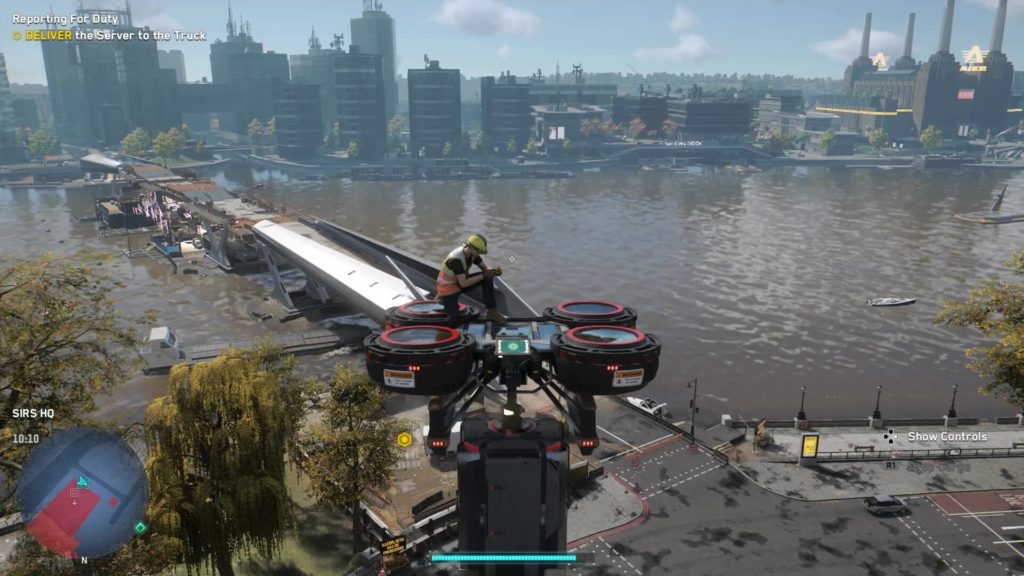 As for the other characters, well they’re not much to write home about except maybe a couple of them. London is divided and as for the main story you follow 3 story threads which all connect with each other in small ways. It’s a little similar to what Assassin’s Creed Oddyssey did, with there being no ‘one main story’ thread. However, you are required to complete all threads to reach the end in a natural manner, unlike Odyssey where you could end any thread in any order regardless of whether it made sense.

The 3 main story threads here follow Nigel Class – head of Albion, Mary Kelly- the leader of clan kelly (a criminal organisation) and Zero Day – who framed Dedsec for the inciting incident of the game. All of these blend relatively well with each other, with Zero Day being the main antagonist of course.

RTX Off vs On

Watch Dogs Legion is a good looking game when you turn on its ray tracing feature. Without that though, it’s kind of hard to tell the visual difference between it and it’s immediate predecessor. That’s not to say that without RTX it’s bad, but then again turning it on will reduce performance heavily. We dove deeper into the game’s setting and performance in our dedicated technical overview of the game, and this was done before the game came out. Since then, a day one patch has now gone live for all platforms including PC which supposedly increases performance and addresses some issues, which we’ll be looking into shortly. We played the game on multiple PCs with different configurations, and the game wasn’t exactly well optimized. 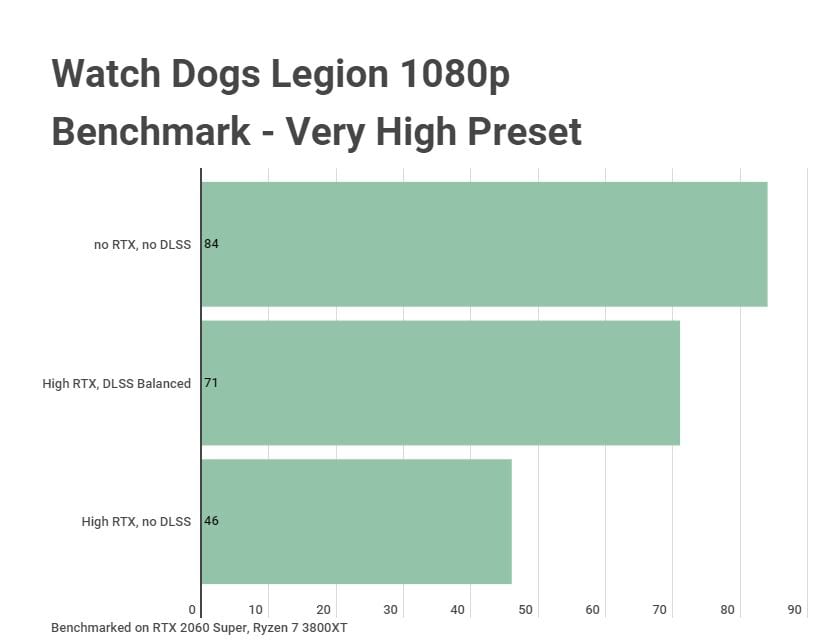 I hope that performance has improved with the new patch, as even using DLSS to increase frame rate would result in a poor, blurry image.

Watch Dogs Legion is a fine entry in a franchise which keep changing up its tone with each instalment. It mixes the tones from the 1st 2 games well enough with a serviceable story and an engaging gameplay mechanic. How much fun you want from this game will depend on how much variety the game’s ‘play as anyone’ system offers, which in my experience has been plenty.

Watch Dogs Legion Review – You Really Can Play as Anyone, and That’s Fun!