You ever come across someone who just inexplicably gets your heart pounding, jaw-dropping, and mouth drooling? For the past couple of years, Noah Centineo has become a major heartthrob after his heartfelt acting in To All The Boys I’ve Loved Before. If Noah Centineo makes your heart race too, then here are 5 must-watch Noah Centineo movies to get all kinds of butterflies in your stomach.

10 Things to pack for a road trip(and…
Karen Wiesner: The Stories Behind Cla…
The BEST Harry Potter Pumpkin Juice R…
The Best Books That Have Inspired Mov…
Alternative Career Options for the Bu… 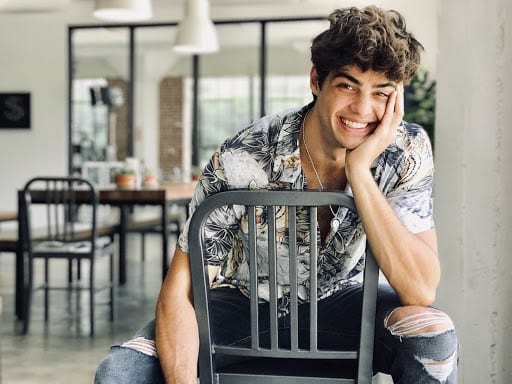 Noah made his acting debut as Josh Peters in the family film The Gold Retrievers (2009). He then had small roles in the Disney Channel sitcoms Austin & Ally and Shake It Up. Later in starred in a Disney Film, How to Build a Better Boy (2014). He was subsequently cast in Growing Up and Down (2014). Later, Noah took the main role of Jesus Adams Foster in The Fosters (2013). In 2017, he was nominated for the Teen Choice Award for Choice Summer TV Star: Male for his performance. Finally, in 2018, his career took a flight when Netflix released three Noah Centineo movies in a year!

From his killing smile that makes my heart skip a beat to his gorgeous eyes, Noah Centineo is an absolute treat for sore eyes. So, without any further delay let’s have a look at the six coming of age Noah Centineo movies.

1. To All The Boys I’ve Loved Before

Noah Centineo as Peter Kavinsky in To All The Boys I’ve Loved Before is adorable and a major crush. A teenage girl’s secret love letters are exposed and wreak havoc on her love life. From a shy introvert girl, the movie is a journey to learn how to love fearlessly. I just can’t get enough of this movie and Noah Centineo, of course.

TATBILB is based on a book of the same name by Jenny Han and believe me, the movie and book are way different (yes, I have read all three books in the trilogy). Peter and Lara don’t have a happy ending in the first book unlike the movie but still, the movie is super sappy rom-com and does justice to teenage drama and high-school shenanigans. TATBILB is a masterpiece that ignited Centineo’s craze among girls and is no doubt the best Noah Centineo movie.

Stream To All The Boys I’ve Loved Before here.

A high school student creates an app to offer his services as a fake date to make money for college. When he develops real feelings for someone, his plan gets complicated. It might not be the best rom-com you will see but its not the worst either. The movie is based on the book The Stand-In by Steve Bloom and its screenplay is written by Bloom and Randall Green. The Perfect Date is made charming by the oh-so-handsome Noah Centineo’s acting and the talented Laura Marano.

3. Sierra Burgess Is A Loser

A case of mistaken identity because of a wrong number text leads to an unexpected virtual romance between a smart but unpopular teen and handsome jock (Noah Cetineo, of course) who thinks he is talking to a stunning cheerleader. Sierra Burgess Is A Loser is based on Edmond Rostand’s play Cyrano de Bergerac. Although the film has been criticized for romanticizing illegal choices like catfishing and sharing a non-consensual kiss with Sierra’s love interest, this inventive teen romance is one with a soul.

As Lara’s relationship with Peter continues to grow, she reunites with another recipient of one of her old love letters, John Ambrose McClaren (Jordan Fisher). TATB: P.S. I Still Love You, focuses more on the emotional rollercoaster ride of Peter and Lara and the relationship problems they face. Truly, one of the best Noah Centineo movies and a heartfelt teenage drama. The film released on February 12, 2020, exclusively on Netflix, with a third film titled To All the Boys: Always and Forever, Lara Jean in post-production.

Stream To All The Boys: P.S. I Still Love You here.

Eighteen-year-old Penny Cooper (Carson Meyer) spent years pining for high school heartthrob Johnny Sanders Jr. (Noah Centineo) before his father’s tragic death brought them closer. The arrival of an enigmatic musician in the town marks a turning point in the loves of four artistically-minded teenagers. The screenplay and cinematography aren’t the best but this coming-of-age film is a decent pick.

Also Read: 5 Inspiring and Entertaining Movies That Every Student Must Watch

James (Noah Centineo), a popular college freshman, asks for help from a computer genius to develop a hook-up app. Their brilliant idea to make a profit by meeting new girls is a success. However, with the popularity of the app, things go out of control when James discovers that his divorced mother is using the app. Swiped is a satire about hooking up in the digital age misfires. Like some other Noah Centineo movies, this one received its own share of negative criticism as well but overall, it’s an okay-ish rom-com to watch.

Although not all Noah Centineo movies have a blockbuster storyline, they do justice to teenage rom-coms and one can not stop but droll over Centineo’s boy-next-door charm!

This post first appeared on TechQuila, please read the originial post: here
People also like
10 Things to pack for a road trip(and not to forget)
Karen Wiesner: The Stories Behind Classic Fairy Tales (Woodcutter's Grim Series), Part 1
The BEST Harry Potter Pumpkin Juice Recipe
The Best Books That Have Inspired Movies
Alternative Career Options for the Burned Out Physician
18+ Adult Movies Of All Time To Fulfill All Your Sexual Fantasies| Lolita, Exotica and More
How to Get Rid of Mice – 5 Methods
Five Fantastic Films Featuring Blackjack
6 Interesting Places To Hold Your Next Corporate Function
This is the year to buy a gaming TV