Research Shows That Some Ancestors of the Crocodile Were Bipedal

Crocodiles are a bunch of bulky, fast and vicious semi-aquatic reptiles with an astounding crunch. A saltwater crocodile can slam its jaws shut with 3,700 pounds per square inch (psi), or 16,460 newtons, of bite force. For a frame of context, we bite into our food with around 150 to 200 psi (890 newtons) of force. Thus, it would be safe to say that we’re lucky these toothy lizards aren’t hunting on land.

Recent research has seen an examination of evidence related to crocodilian ancestors walking on two legs. Footprints of the crocodylomorph were found in the fossil-rich Jinju Formation in South Korea (more about crocodylomorphs here). Researchers found the fossilized footprints ahead of a construction project.

Researchers named it the Sacheon Jahye-ri track site, as it lies west of Sacheon City in South Gyeongsang Province. Aged nearly 106 million years, the spacing between the footprints indicates that these prehistoric crocodiles were 2-3 meters in length. Though no fossils of this particular species were found, a plethora of footprints and skin impressions were preserved in stone. 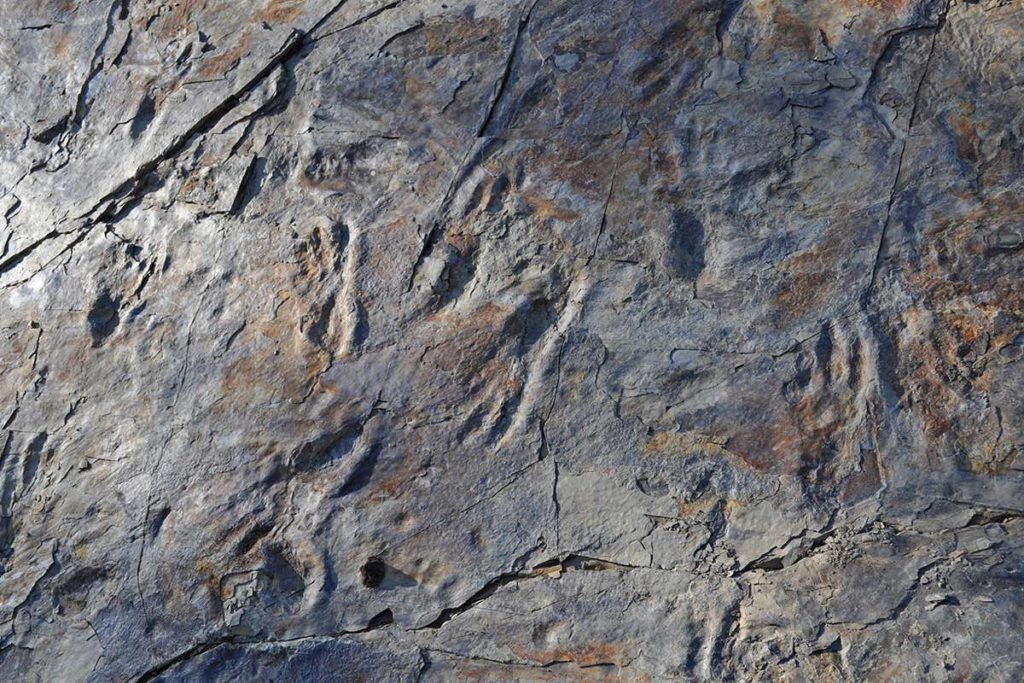 The footprints of a bipedal Crocodile.

Martin Lockley, professor emeritus of geology at the University of Colorado, Denver said, “Short of finding the animal dead in its tracks, there’s always a little bit of uncertainty.” The distinct foot impressions that were preserved perfectly made it easier for identification, attributing the footprints to Batrachopus, a genus of fossil tracks known to be made by crocodylomorphs.

The preserved prints did not contain indications of any hands, hinting that the croc might’ve solely depended on its hind legs for locomotion.

“We have dozens of these things, and not one sign of a front footprint, so we’re pretty convinced,” said Lockley.

Proposaurus gracilis, a crocodylomorph compared to a human.

Also, the tracks were not minuscule and measured up to ten inches in length. Anthony Romilio, a palaeontologist at the University of Queensland in Australia and a senior study researcher estimated the size of the legs to be similar to that of ours.

“For the first time, we have proof that some of the giant crocodiles of the Cretaceous were Bipedal and really designed like the carnivorous dinosaurs,” said Lockley in a statement.

This post first appeared on TechQuila, please read the originial post: here
People also like
The Mysterious and Majestic Atacama Desert: A Guide to Visiting this Unforgettable Place
7 reasons why you should visit Tanzania
The Friday Roundup – YouTube Lighting, Filmora Tips and Solo Shooting
Can SEO Help Reduce Your Website’s Carbon Footprint?
13 Most Popular Cartoon Characters With Trendy Mustaches
Insights That Will Help You Develop A Successful Milk Delivery App Like Milkbasket
The Mystery of the Monoliths: Possible Alien Life?

Research Shows That Some Ancestors of the Crocodile Were Bipedal