The benchmarks for the Tiger Lake CPUs were leaked out in the last month and it claimed to be one of the fastest CPU working on the willow cove architecture. However, The benchmarks have leaked out for Tiger Lake’s Gen12 Xe GPU recently. In the past few weeks, we have seen many leaks of the lineup which claims the exact specs of the GPU. The 12th gen GPU will be integrated into 11th Gen Tiger Lake-U Mobile processors. The leaks also claim that the processor will be two times better compared to the 10th Gen Ice Lake chips which feature 11th gen GPU.

The scores suggest that Intel has finally made a worthy competitor to AMD Radeon RX Vega GPUs. The leaked scores came from Notebookcheck and Rogame. The 3DMark Fire Strike results made it clear that intel has surpassed Ice Lake in terms of performance. 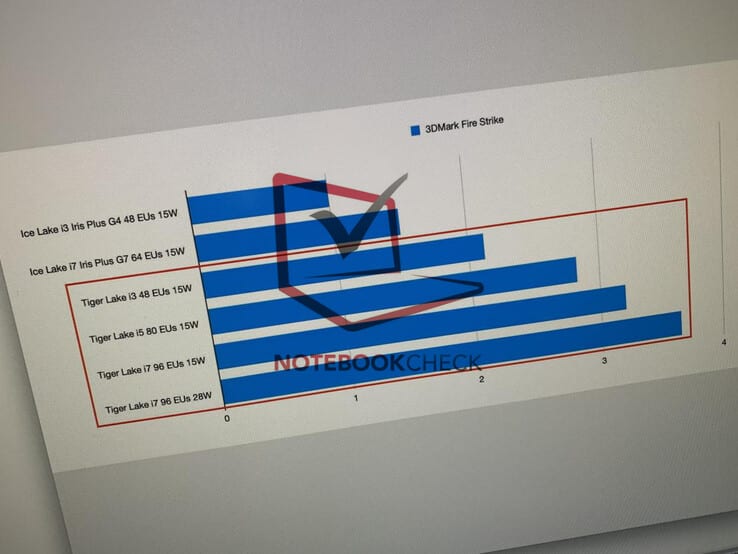 The slide on the Notebookcheck mentions four Tiger Lake SKUs. They are single core i3, i5, i7, and a dual-core i7 CPUs. The first three are listed with 15W and the last with 28W.

Intel’s 11th Gen GPUs failed to compete with AMD Radeon RX Vega 8 in the Ryzen 7 4800U. AMD was offering 40% better GPU performance compared to Ice Lake 11th Gen GPUs. But now, It seems like Intel is ready to become the fastest iGPU with the 12th Gen GPUs. However, the Tiger Lake-U processors must retain the benchmark scores.

Rogame’s leaks suggest that the early ES samples for a 28W Tiger Lake-U chip with 96 Gen 12 Xe GPU were better than the Ice Lake Core i7 chip in 3DMark Firestrike. It showed an 80% performance increase over the Ice Lake chip. The Core i7 Tiger Lake-U chip is 15% faster than the AMD Ryzen 7 4800U. AMD’s chip features 512 cores (8 CUs) at 1750 MHz. The Tiger Lake Core i3 model is also ahead of the Ryzen 3 in terms of performance. As these are only engineering samples that were compared to the final product of AMD.

Intel’s Tiger Lake CPUs are coming in the middle of this year. The 11th- generation Tiger Lake mobile CPUs will be built around 10nm+ Willow cove Architecture. It is built by redesigning Sunny cove Architecture. Intel also promised that the processor will be featured in more than 50 notebooks by the end of the year.

The engineering samples made things interesting. Still we have to wait for the launch and see whether Intel will meet the expectations or not. Intel is on the right path to become one of the fastest GPU and beat AMD in the market.

This post first appeared on TechQuila, please read the originial post: here
People also like
Canadian Online Casinos at its Best
Homemade No Churn Raspberry Ice Cream
Most Beautiful Mountain Lakes in Switzerland You Can Easily Reach
Mr Vegas Casino Review – Get up to a £200 Bonus on your First Deposit
10 of the UK’s best beach cafes and bars
Physician Assistant Career Advancement Through Higher Education and Certification
Intel Tiger Lake-H Laptop Processors Officially Released, Tops Out At 8 Core With 5GHz Boost Clock