2019 was a busy year for the graphics card market. We saw the launch of AMD’s Radeon Navi cards based on the new RDNA architecture, NVIDIA countered with the RTX 20 Supers and later the GTX 16 Supers. This year also got some action from AMD in the form of the Radeon RX 5600 XT, but it’s too early to tell how well it has done. We’ve pulled out the Steam Hardware Survey scores which give us an idea of which GPUs are most popular among Steam gamers. The results aren’t remarkable but that’s not surprising. Let’s have a look: 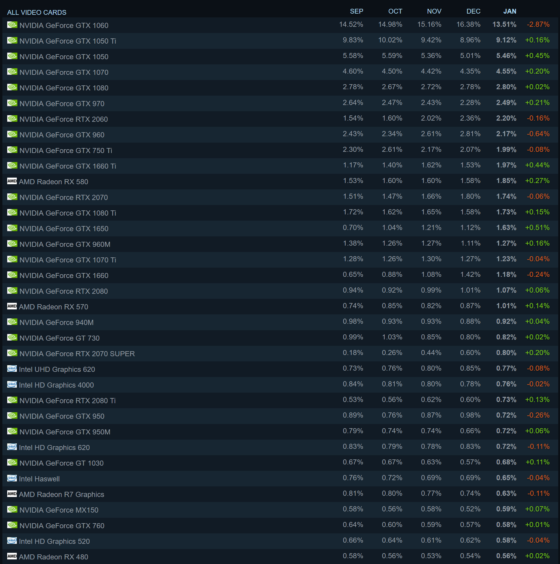 The RTX 2070 Super is the first Super card with a share of 0.80%. It has been rapidly gaining ground after first popping up in the Steam Database in September last year. Surprisingly, the AMD Navi cards, the RX 5700 and the 5700 XT are way down in the list. 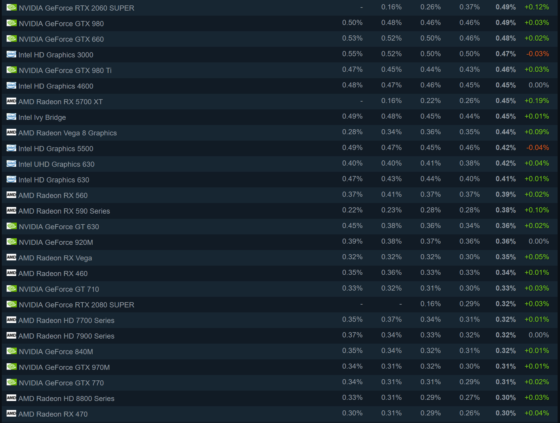 The Radeon RX 5700 XT although it has been gaining traction, is still far behind its NVIDIA competitor with a paltry share of just 0.45% (RTX 2070 Super has almost twice as much). The RX 5700, on the other hand, is the second least popular GPU with a share of just 0.15%. I’m guessing the recent AMD driver issues are partly to blame for this, as the GPU completely went off the charts in December, only to resurface again in Jan with a slightly lower percentage. This isn’t due to the Steam Database being outdated, as the RTX 2060 which launched at the same time has a rather healthy 0.49% share as of January, and consistently climbing. The RX 5700, however, has been largely static with less than 0.20% over the last six months.

With Navi and RDNA, AMD has significantly improved its GPU architecture, but unless the driver issues aren’t ironed out, gamers will continue to flock to NVIDIA GPUs.