Earth is dying and this couple is crowdfunding a sex button

The button may seem like a seamless way to start a heavy night of passion, especially if you don’t want to talk to your partner beforehand for whatever reason, but there are a couple of problems with the button’s existence.

“When you’re feeling like you could be gettin’ down for some action, you anonymously tap your button,” the page reads. “Your desire will be stored for a set time period. No risk of rejection here, and no pressure on your partner — if only one of you tap, nothing happens.” 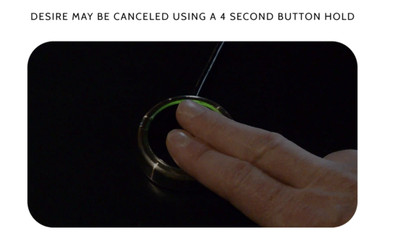 Kickstarter
Your partner can simply just cancel your desire.

According to LoveSync, seemingly the new frontrunner for sex therapists of the year, here are the conditions in which it is okay to have sex with your partner:

LoveSync’s Kickstarter campaign page states that “It provides the most benefit for couples who tend to not be as frequently outward about their sexual desires, but even those with above average drive have room to improve.” This may be a good starting point for people who aren’t comfortable or able to pick up on nonverbal cues, but it should only be the first step — everything should lead back to communication.

An FAQ section for the campaign goes into additional details about the product, including noting that although “LoveSync will significantly reduce the number of Failed Foreplay Attempts targeted at trying to find out if your partner is ‘in the mood,’ foreplay itself is an important psychological and physiological aspect of healthy sex.” The FAQ section, unfortunately, doesn’t include advice about simply talking to your partner about why there are so many failed foreplay attempts between the both of you.

This is the main issue with LoveSync’s strategy: it might be an easier way to let your partner known that you want to have sex, but doesn’t fix the fundamental issue at hand. Talking about sexual relationships, and what your partner wants or needs to have a fulfilling sexual experience, is key to having a fulfilling sex life. It’s not just about having more sex, as LoveSync’s Kickstarter page boasts, it’s about having better sex. Kate McCombs, a sex educator, told HealthLine this in 2017.

“When you avoid those vital conversations, you might avoid some awkwardness, but you’re also settling for suboptimal sex,” she said.

LoveSync turns sex in an intimate relationship into a quantifiable activity, instead of one that should be centered around the quality of a couple’s sex life. Healthy sexual relationships are borne out of healthy and openly communicative partners. Simply tapping a button and hoping your partner will tap back, like some kind of morse code in a dark room, doesn’t fix the problem, it temporarily puts it on hold.

And if your partner chooses to hold their button down for four seconds and “cancel your desire,” you’ll be left thinking about what’s going on inside their head instead of simply having a conversation.

Seriously, just talk to your partner the next time you want to have sex and are unsure if they’re up to it — and save yourself $50 in the process.

The post Earth is dying and this couple is crowdfunding a sex button appeared first on Breaking News on Tech, Sports, Entertainment.

Earth is dying and this couple is crowdfunding a sex button