ISRO GSLV F-09 Satellite launch Live Updates: Indian Space Research Organisation (ISRO) has launched the much-anticipated the South Asia Communication Satellite on Friday afternoon – PM Narendra Modi has famously projected it as India’s ‘gift’ to South Asian countries. The Geosynchronous Satellite Launch Vehicle GSLV F-09 carrying the communication and broadcasting satellite will take off from the second launch pad of the Satish Dhawan Space Centre at Sriharikotta at 4.57 pm. Prime Minister Narendra Modi in his episode of ‘Mann Ki Baat’ said the satellite is India’s gift to the region that will go a long way in addressing the economic and development priorities of the nations in the region. Six of India’s neighbours including Afghanistan, Bangladesh, Bhutan, Nepal, Sri Lanka and the Maldives are participating in the space-based regional communication project. The satellite weighs around 2230 kilogram during lift off and will be carrying 12 Ku-Band transponders. It has been developed at a cost of about 235-crore rupees and the total cost of the project including the launch is worked out to be about 450-crore rupees. 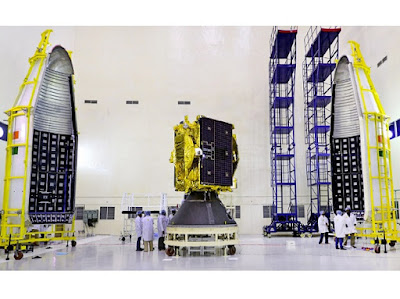 . Addressing the nation through his monthly radio programme Mann ki Baat, Prime Minister Narendra Modi on Sunday said the satellite launch is in tune with his government’s inclusive development agenda, “sab ka saath sab ka vikas”. While Bangladesh, Sri Lanka, Nepal, Bhutan and Maldives are part of the programme, Pakistan  opted out.
5.05 pm: The successful run of India’s premier space agency, ISRO, continues with yet another feather added to its cap. Most recently, ISRO set a record by placing over 100 satellites in orbit.
5.00 pm: Here are the first images from the launch.

4.57 pm: We have lift off. The GSLV-F09 appears to be following the preset trajectory without any visible hitches.
4.55 pm: We are just a few minutes away from liftoff. The countdown will begin soon. Launch time: 4.57 pm.
4.50 pm:  The launch will be a huge boost to PM Modi’s “neighbourhood first policy”. It is set to propel regional cooperation between SAARC-member countries to new levels.
4.45 pm: Other added benefits and uses include mapping natural resources, tele medicine and education.
4.40 pm: The satellite is equipped with 12 KU transponders that will aid in improving communication between countries. The six participating countries in the space programme will be given access to at least two transponders.
4.30 pm: The GSAT-9 weighs 2230 kgs and was built in three years. It will have a mission life of  more than  12 years.