Spacefest III was held at the Starr Pass resort in Tucson this past weekend (June 2-5). Kim and Sally Poor of NovaSpace Galleries here in Tucson have organized the Spacefest since its first one 4 years ago. Kim contacted me earlier this year and asked if I would speak at this years event and I gladly agreed. Later, he asked if I could help with the Kitt Peak tour which I also agreed to do. One of the benefits of speaking was that I got to go to the event for free - definitely a great tradeoff.
When I got to Starr Pass on Thursday morning around 7AM I quickly found the meeting site for the tour bus that would take us to the Arizona Sonora Desert Museum and then up to Kitt Peak. Eventually all 33 folks would gather there including a group of 12 students and two teachers from Aiglon College in Switzerland. Aiglon College is a boarding school at the U.S. High School level and the boys were ages from 14 to 16. The head of the program, teacher Christopher Starr was attending his 2nd Spacefest and from the start, it was obvious that the 12 boys in his care would enjoy their 8 day trip to Arizona. They had already visited Lowell Observatory in Flagstaff, the Grand Canyon and Meteor Crater. They were in for the time of their lives as they would get to meet some of the most famous men in Space history. But first, the Desert Museum would present its fantastic array of plants and animals to them. I sat next to Christopher on the bus ride to the museum and after getting off the bus, I told him that if any of his students had any sorts of questions, especially about Astronomy, I'd be happy to talk with them.

Inside the Desert Museum, I met up with the students from Aiglon College and as the group split up heading for various parts of the place, two of the students stayed close to me. One of them, Dom, is an astronomy enthusiast. It was fun having them with me as I went about exploring a museum (really a modern zoo) with my camera, hunting for so many things that it had been a few years since I'd seen.
We left the Desert Museum by about 11:45, heading for Kitt Peak. I don't get to sit and watch the scenery very often since normally I'm busy driving. We met up with Travis Rector, a professor at the University of Alaska who used to work at NOAO. We split the group in half with Travis taking his half up to the 4-m and I took my half to Spacewatch, showing them both of our telescopes. After 45 minutes or so, we traded groups. Things went quite well and after a visit to the visitors center, we headed back for town, returning to the hotel about 10 minutes before the scheduled return time. 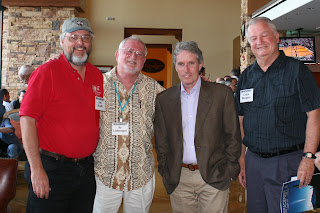 After getting my nametag and "speakers" ribbon, I almost immediately found Sy Liebergot (in the photo I am on the left with Sy, Michael Cassutt and Colin Burgess), sitting in the hotel bar with a few friends. I had been in e-mail contact with him in the past, so as soon as he saw my nametag, he eagerly introduced himself and it was like we had been friends for 20 years. He's somewhat opinionated and has a good memory for details and I enjoyed tallying my first 90 minutes of logged "Sy time" with him. Afterwards, I found a table of space artists including my friend Dan Durda and his mom as well as old friends and new friends Michael Carrol, Pamela Lee, Michelle Rouch, and Anil Rao.
Friday morning started a little late and began a trend. I had planned to see Adam Block's talk or at least Leonard David's talk, but we got up a little late and instead of watching only half a talk, I wandered into the exhibit room where all the vendors, artists and astronauts were located. After saying hello to Sally Poor, I wandered over to the artists table where Bill Hartmann was working on a small piece. Pam Lee was there as well. A short visit later, I wandered into the area where all my childhood heroes would be signing autographs. I saw Rusty Schweickart, but he had a crowd around him. Next to him was Ed Gibson, Skylab 3 astronaut with only one visitor, so I waited for my turn. I did not plan to get any autographs (which cost money), I think 5 minutes chatting with these legends is much more valuable than a signature on a photo or book. I introduced myself and told him about how he and his colleagues had inspired this then future scientist. On Christmas 1973, Gibson was aboard the SkyLab space station and I watched it fly over Governors Island in New York harbor where I lived at the time. I waved at the little point of light that I knew had 3 humans on it and said "Merry Christmas!". Gibson, obviously enjoyed the story but replied "I don't think I waved back." Then I told him about the first time I ever saw a live astronaut in person. The SkyLab 3 crew were presented the "Key to the City" of New York and I got to go to the even at City Hall with some of my classmates. We sat in the back of the room and breathed the same air as Ed Gibson and his two crewmates.

I did get to talk to Rusty Schweickart later in the day. He's very interested in the NEO impact threat and we had a lot in common to talk about. I got a picture of him later on as he talked with Joe Hecht, a fellow space nut.
I wandered around the corner and saw a room full of my childhood heroes, most with lines of 4 or more people awaiting their audience. On one side of the area, I saw Jim Lovell with a line of a dozen waiting to talk to him, Fred Haise, with about 8 folks in line, and I heard crickets chirping when I approached my "old friend" Sy Liebergot who sat patiently between the two Apollo 13 crewmembers who he helped return safely to planet Earth 41 years ago. So I said hello and proceded to add another half hour to my Sy Log.
Looking around the room, continuing to the left past Freddo was Dick Gordon, and Alan Bean. On a row perpendicular was Tom Stafford. To his left was an empty booth for Richard Hatch (Apollo of the original Battlestar Galactica), Charlie Duke, Walt Cunningham and Ed Mitchell. On a row perpendicular to that was Gene Cernan, Al Worden, Jack Lousma and empty booths for Dave Scott and Rick Searfoss (shuttle astronaut now working for XCOR). It was Space Geek heaven wandering around this area! I waited for the lines to be short, then I introduced myself and usually told the hero of mine that he and his colleagues had inspired me to become an astronomer. I spent a few minutes with Charlie Duke and he seemed genuinely interested to hear how he contributed to my success. I had met Dick Gordon before and chatted with him for a few moments. I noticed that the astronauts were particularly good about making you feel like you were an old friend whether they remembered you or not, whether they'd ever laid eyes on you before or not. They would very quickly glance at your nametag (sometimes without your even noticing) and then greet you personally: "Hi Jim! Nice to see you." I can't imagine that most of them would remember me personally considering all the folks they must meet, but it sure did make me feel welcome.
My only real disappointment was when I met Al Worden, CMP on Apollo 15. He was a nice guy and all, but after I told him how he and his colleagues had made a big difference in this astronomers life, he quickly steered the conversation into ancient Sumarians and the flying ships they apparently used. He referenced biblical passages and spouted other nonsense. I quickly tried to steer the conversation to something less upsetting, like the demise of the Space Shuttle program and the lack of future manned exploration plans.... 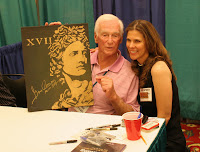