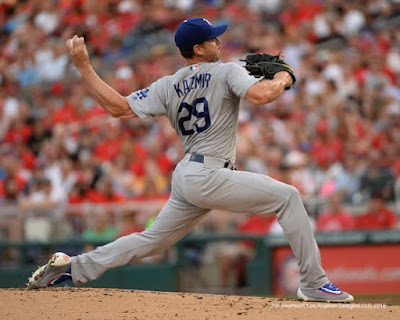 Scott Kazmir not only battled the Nationals last night, he also struggled against cramps that creeped up on him in the fifth inning.  Fortunately, neither was a match for veteran pitcher.  Per Doug Padilla at ESPN:

“I think I drank everything pretty much under the sun: pickle juice, some mustard,” Kazmir said. “I think I had some of that on my face the next half-inning. But it was a lot of stuff that actually worked, so I was good after that.”

While on the mound Kazmir went seven innings, gave up four hits, one earned run and struck out eight batters.  Per Alex Putterman at MLB.com:

"Kaz has a lot of fight in him, and with what we're going through, guys have got to step up," manager Dave Roberts said. "And today was a great outing by Kaz. Everything was working. He had command of everything."

Photos above via Jon SooHoo/LA Dodgers 2016.  Go here to check out more pics by Jon from yesterdays game.  Below are more links to check out:

Hyun-Jin Ryu has been scratched from his outing tomorrow due to elbow discomfort. MRI showed no notable changes from previous exams.
— Andy McCullough (@McCulloughTimes) July 19, 2016

“After that, we don’t know what the plan is for Julio, but we’re looking forward to him making that start on Thursday,” manager Dave Roberts said.

Verdugo said how he prepares is the key.

"It's about coming to the field every day and having the same routine and sticking with it," he said. "Then, when the game comes, it's just about having a plan and executing it. If the pitcher makes a mistake, you just have to execute and take advantage."

She was at a game. She got cold. She slipped out of her seat and headed to the stadium shop to find a sweatshirt, a hoodie, something to warm her up.

But when she walked into the shop, she couldn’t find anything for women that wasn’t pink.

“And I’m really offended by the pink, being a huge sports fan. I just didn’t understand why there was nothing in the team colors and everything looked like the cuts were cut for kids,” Milano said during the Sports Business Journal’s Game Changers conference in New York City, celebrating the women in sports business.

What Are Your Worst Grief Triggers ?
Holcim Philippines shares contributio…
Landmark beach Lagos: All you need to…
How To Run a Beauty Salon And Not Los…
Guest Experience Manager – MyStay
— Los Angeles Dodgers (@Dodgers) July 19, 2016