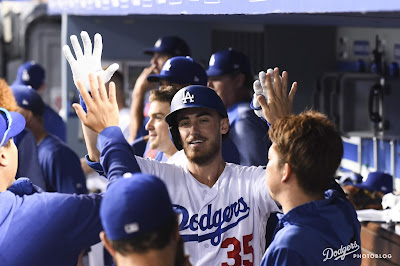 The Dodgers decided to take out their anger against the Rockies last night after having lost six over the past ten games. Per Ken Gurnick at MLB.com:

“It was a Coors Field game tonight,” said manager Dave Roberts, whose club homered eight times at home on Opening Day. “The ball was jumping.”

They slugged seven homers to defeat Colorado, 16-9. Photo above via Juan Ocampo/Los Angeles Dodgers at Dodger Insider. Go here to check out more pics from yesterdays game. Below are more links to check out (catching up on weekend holiday news):

"I got the wind knocked out of me and, like, a weird cramp in my obliques, rib-ish area, so they were a little concerned," Pederson said. "But so far, so good."

The Dodgers had previously replaced the netting behind home plate and above both dugouts with a 33-foot net, an increase of 8 feet. The 33-foot netting was extended this week an additional 124 feet down the baselines, from both dugouts to the elbow bend in front of the baseline seats.

"The decisions to both raise and extend the nets at Dodger Stadium were made after extensive data analysis and consultation with both players and fans," Dodger President & CEO Stan Kasten said in a statement released Friday. "We think these extensions to the netting greatly enhance fan safety while also keeping Dodger Stadium the welcoming and comfortable place it has always been."

What is Conversion Tracking? How to S…
A Comparison of the Environmental Imp…
Why Friday The 13th Will Be Your Luck…
The 10 Leading Blockchain Companies o…
The Ultimate Winter Bucket List Accor…

The 21-year-old was down for a few minutes before sitting up and eventually walking off the field.

"It just pretty much grazed my glove, but I think it slowed it down enough to not do too much damage,'' May said. "It hit off the band part of my hat, so I mean, it was probably the best possible outcome for it. It was pretty scary.''

Dave Roberts said Dustin May has neck soreness, but he feels fine after being hit by liner.
— Ken Gurnick (@kengurnick) September 2, 2019

Like learning the litany of features on a new smartphone, the Dodgers — who are fully implementing the device for the first time this season — have explored the best way to incorporate the VR system, which is manufactured by WIN Reality and used by nine or so teams. For a club hoping to finally win a World Series after back-to-back National League pennants, the technological toy has become a new tactic for improvement.

“It just adds to the familiarity (at the plate),” manager Dave Roberts said. “It’s not really taking the swing, it’s just more seeing where the ball comes out of, the flight, the lane the ball is getting to home plate.”

One-time top pitching prospect Yadier Alvarez was placed on the restricted list by the Dodgers for unspecified disciplinary reasons and does not count against the 40-man roster.
— Ken Gurnick (@kengurnick) September 3, 2019

“Raptors management can confirm that Outfielder Ryan Ward suffered a minor concussion from a wall collision during last nights game vs. Orem. Although serious, everyone is so pleased that the injury sustained by Ryan wasn’t worse. Big thanks to the medical staffs from both teams
— Ogden Raptors (@ogdenraptors) September 3, 2019