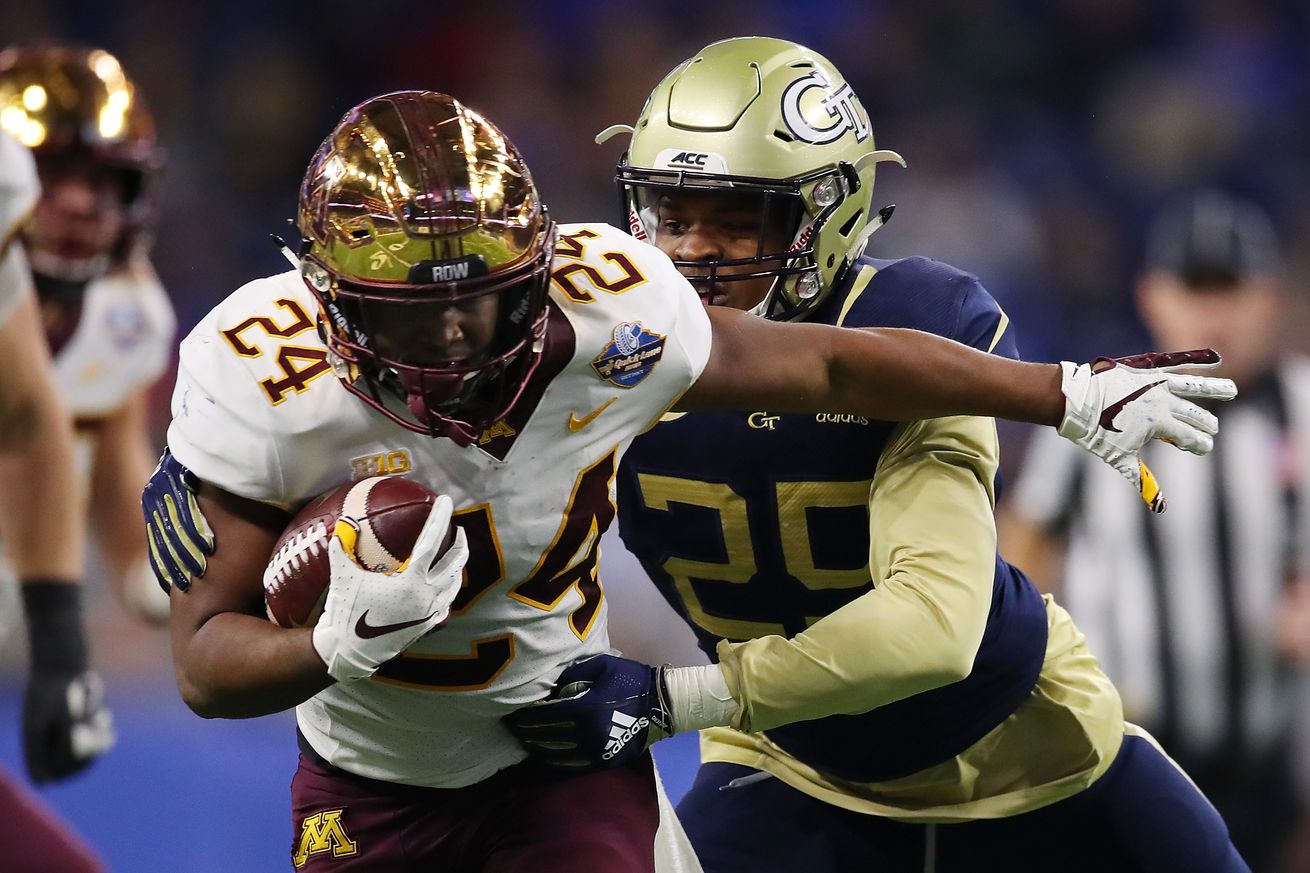 The Gophers may not be in the spotlight, but could be a contender in the Big Ten west.

Minnesota is an easy team to overlook in the Big Ten’s West division. Last season, the Gophers finished 7-6, but ran hot (beating both Purdue and Wisconsin soundly) and frigid (getting trucked by Illinois and Iowa). After Illinois hung 55 on the Gophers, Minnesota fired defensive coordinator Robb Smith and promoted defensive line assistant Joe Rossi. The Gophers then went on to beat Purdue and Wisconsin to finish the season on an upward note. And with 16 returning starters, Minnesota should be able to build on that strong finish.

Quarterback is probably the biggest position battle going into 2019. Sophomore Zack Annexstad (6’3” 215 lbs.) won last year’s starting job in preseason camp, but his true freshman season ended at halftime in Lincoln after Annexstad was hospitalized due to a injury to his midsection. Sophomore Tanner Morgan (6’2” 210 lbs.) took over, and Minnesota won three of their last five games of the season. Morgan’s numbers (59% completion percentage, nine touchdowns with six interceptions, and rushing for a positive 51 yards) were better than Annexstad (52%, nine touchdowns with seven interceptions, and lost 89 yards on the ground), but observers thought that Annexstad reclaimed the starting job this spring. But then Annexstad suffered a severe foot injury last week that should keep him out “indefinitely.” When pressed further, head coach P.J. Fleck suggested that Annexstad “could” come back later in the season, but that it also “could” be a season-ending injury. True freshmen Jacob Clark (6’5” 215 lbs.) and Cole Kramer (6’1” 190 lbs.) are now battling for the backup position. Clark was a four-star pro-style quarterback recruit, while Kramer is much more of a dual-threat quarterback.

Last year, the tag-team duo of Rodney Smith (5’11” 210 lbs.) and Shannon Brooks (6’0” 213 lbs.) were expected to add to their nearly 5,000 yards combined rushing over their first three seasons... until both went down with ACL injuries. Both are expected to return for a second attempt at their senior seasons, though Smith’s recovery is ahead of Brooks’. Sophomore Mohammed Ibrahim (5’10” 204 lbs.) stepped in admirably, rushing for 1,160 yards and nine touchdowns, averaging 5.7 yard per carry. Sophomore Bryce Williams (6’0” 200 lbs.) rushed for 502 yards and four touchdowns as a true freshman; if both Smith and Brooks are able to play, look for Williams to only play enough to keep his redshirt season.

The Gophers typically aren’t known for their receivers, but 2019 might be a different situation. Senior Tyler Johnson (6’2” 200 lbs.) caught 78 passes for 1,169 yards and twelve touchdowns last season. The all-Big Ten wideout considered jumping to the NFL, but elected to return after his school-record junior season. His 184 yards against Nebraska last season was his career high performance in a game.. Sophomore Rashod Bateman (5’10” 210 lbs.) set a freshman school record last season with 704 yards on 51 catches. Fellow sophomore Chris Autman-Bell (6’1” 210 lbs.) caught 28 passes or 449 yards.

The remaining question on offense are up front on the line where two starters need to be replaced. Junior center Conner Olson (6’5” 297 lbs.) has started every game in his Gopher career, while mammoth sophomore right tackle Daniel Faalele (6’9” 400 lbs.) has established himself as the starter. (And yes, Faalele is actually 6’9” and 400 pounds. You want to be the guy who tells him to sit on the bench?)

After the change in defensive coordinators, Minnesota went from giving up 43 points and 508 yards per game against six Big Ten opponents to under 15 points and 300 yards in their final four games. Up front, the Minnesota defensive line will be led by senior defensive end Carter Coughlin (6’4” 245 lbs.). The undersized end makes up for his size with athleticism, as his 9.5 sacks earned him second team all-Big Ten honors last season. Notre Dame graduate transfer Michael Dew-Treadway (6’4” 300 lbs.) played sparingly for the Irish but is being counted on to be a key contributor for the Gophers in 2019.

Minnesota will have to replace strongside linebacker Blake Cashman, the Gophers’ leading tackler last season, but return senior middle linebacker Thomas Barber (6’1” 233 lbs.) and senior weakside linebacker Kamal Martin (6’3” 235 lbs.). Barber is a two year starter who’s totaled 196 tackles the last two seasons while Martin has started 19 games in his Minnesota career. Sophomore Thomas Rush (6’3” 230 lbs.) seems to be the most likely heir to Cashman’s role. Both he and fellow sophomore Mariano Sori-Marin (6’3” 240 lbs.) each played in twelve games as freshmen and totaled five tackles each.

Minnesota’s secondary play will depend in large measure on the status of redshirt sophomore safet Antoine Winfield (5’10” 204 lbs.). Injuries have shorted Winfield’s first two seasons. Last year’s injury in the fourth game of the season allowed him to redshirt; as a true freshman, Winfield had 52 tackles in eight starts. When he’s health, he’s the best in the Gophers’ secondary. Sophomore cornerack Terell Smith (6’1” 195 lbs) started nine games as a true freshman with a team leading nine pass breakups. He’ll match up with junior cornerback Coney Durr (5’10” 191 lbs.) who had five.

I know I was guilty of overlooking Minnesota when thinking about the Big Ten west in 2019; their games against Nebraska and Illinois made that an honest mistake. But when you combine their returning starters on offense and the impact of the new defensive coordinator late in the season, Minnesota has to be in consideration as a darkhorse candidate in the west division. (Let’s be honest, everybody in the west not named Illinois is going to have a viable case to win in 2019.)