Gardner Minshew II: ‘I know I am going to be a great quarterback in this league’ 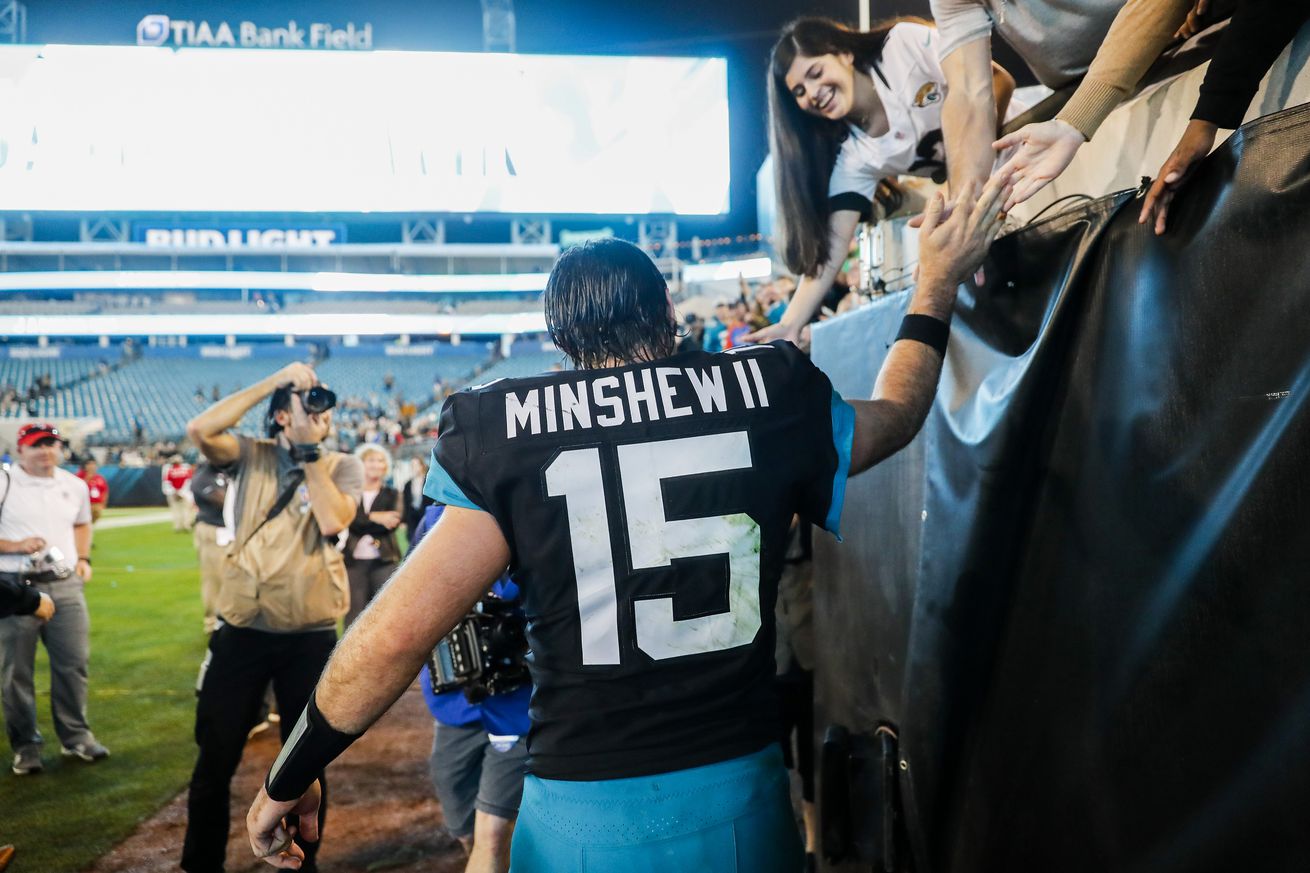 Following a record-setting Rookie season, Jaguars Quarterback Gardner Minshew II has all the confidence in the world in himself

Through a turbulent 2019 season, the Jaguars can hang their hat on at something: Gardner Minshew II proved to be not only a fantastic selection, but perhaps the best quarterback selection in the 2019 NFL draft.

While it was far from a perfectly season for Minshew II, the young quarterback completed 285 out of 470 of his passes for 3,271 yards, 21 touchdowns, and six interceptions on the year in 14 games played — 12 starts —, along with a 6-6 record.

When asked a question regarding how he compares to other rookie quarterbacks, about how he was better or similar than most of them, Minshew II interrupted and said simply, “better”.

“Better. Obviously, I think the biggest thing for me is helping my team win and I did that better than any rookie quarterback so that gets me fired up a little bit,” the confident rookie quarterback said. “You kind of can’t help but compare yourself to those guys, especially when they get taken before you. I still remember guys who got offered to schools I wanted to go to and I didn’t get those opportunities, so I still remember that. You kind of take that with a grain of salt.”

#Jaguars QB Gardner Minshew II asked about how his numbers were better or similar to other rookie QBs taken higher. He instantly answers back “better”

Fantastic answer from the rookie pic.twitter.com/mUFL8L7Z8b

Having a quarterback which exudes that type of confidence is necessary, especially in today’s NFL where quarterbacks are under a microscope more than ever before.

The conundrum the Jaguars are in at quarterback will be settled over the offseason when he and veteran quarterback Nick Foles are expected to compete for the starting position. Regardless of a competition, one thing’s for sure, Minshew II believes in himself, and will work hard over the next few months — after a break —, to get better and ready to compete.

“I know Nick is going to go home and work really hard. We are both going to show up and do the best we can for this team,” Minshew II told members of the media on Monday when asked how he sees the quarterback situation. “And however that shakes out, it is going to shake out.”

During the offseason, Minshew II will be working in Naples, likely with coach Ken Mastrole at his passing academy to work on any weaknesses he can find in his game, explaining that working individually can help in the offseason more than in in-season practices — getting film and focusing on specific areas.

“He is a guy I trained with throughout all of college and then for the combine prep,” Minshew said of Mastrole. “It is really getting back to the basics, being really solid on my fundamentals, and then we will take the film, go through it and see what I need to work on.”

The Jaguars quarterback will be working on a variety of areas in his game, to hopefully better himself moving forward. To him, that’s what it takes to become a great quarterback in the NFL.

“I know what I am,” Minshew II said when asked if it will add a chip on his shoulder being part of the quarterbacks of the future. “I know I am going to be a great quarterback in this league. I think we are going to build something great here.And it is irrelevant what they do as to what we are building.”

10 Tips for Better Finance Management in Your Company

Lessons in Scale for the Gig Economy

The Difference between a Good and Bad Email Signature

Gardner Minshew II: ‘I know I am going to be a great quarterback in this league’