Kunle Soname, the President of Portuguese setup C.D. Feirense, and Etebo’s  bonafide representative Eddie Ogbemudia have cleared the air on speculations linking the Nigeria international with possible moves to Arsenal and Leicester City in the January transfer window. 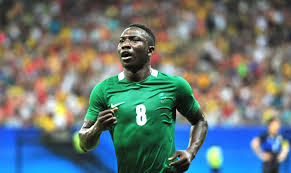 Both Soname and Ogbemudia have made it crystal clear that they have not been contacted by the two Premier League teams regarding a transfer to England.

“Only Arsenal and Leicester City can know if they have scouted him (Etebo) but we  have not been contacted, ” Soname told allnigeriasoccer.com.

“Feirense is open for business on him. As for asking price, we are open to offers. ”

Ogbemudia, Etebo’s intermediary added : “It is good Etebo is being linked with Arsenal and Leicester, it means he is doing well.

“For now no official enquiries, it is a rumour and we will take it as one of those things. ”