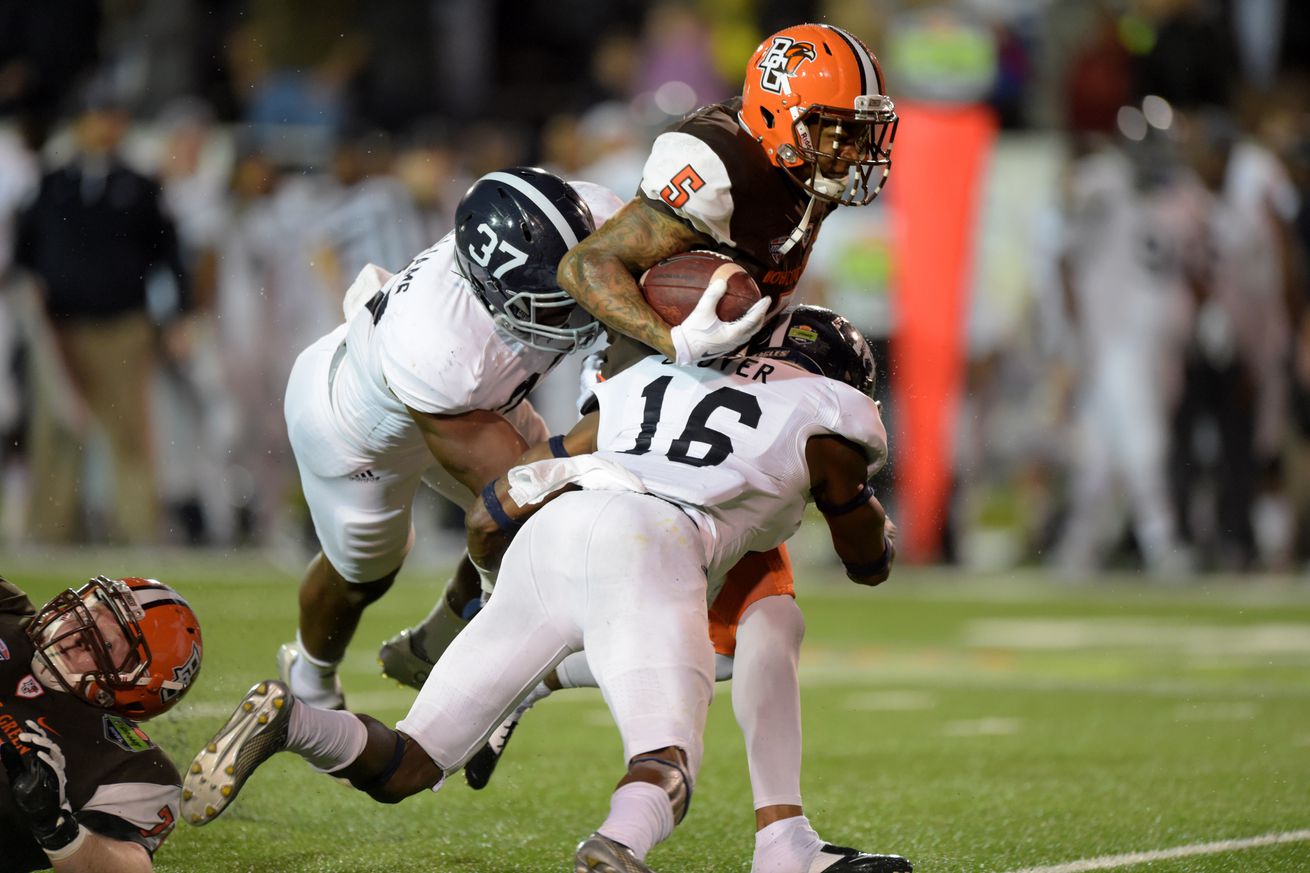 The 90 in 90 roster breakdown continues with a darkhorse candidate at Safety.

Today we continue our annual 90 player roster breakdown in 90 days. If you missed the previous player breakdowns, you can check them out here.

Antonio Glover is a small school prospect hailing from Georgia Southern University. This is only Georgia Southern's second year in FBS play as they recently moved from FCS to the Sun Belt Conference.

2015 was a season to remember for Glover as he was 2nd in the Sun Belt Conference with six interceptions, which was a school record, and was good enough for 6th most in the NCAA. He went on to win First-Team All-Sun Belt honors, and his team destroyed Bowling Green in the GoDaddy Bowl to pick up their first bowl victory in school history.

Glover logged 116 tackles (74 solo), 7 INTs, 6 TFLs, and 5 PDs in his two years at GSU. He was signed by Denver after going undrafted at the end of April. Before the draft he also participated in the NFLPA Collegiate Bowl which likely allowed him to get on many teams' radars.

Blessed to be a Denver Bronco

The Good: There's a lot to like about Glover when watching his tape. One of the biggest things I look for in DBs, especially guys that played deep middle (like Glover often did), is their nose for the ball and willingness to stick it into traffic for a tackle. Glover shows not only a willingness to come down from his FS position and make a stop on the ball carrier, but also quite a knack for it.

Glover was also ranked in a list of five safety prospects that deserve more attention prior to the draft (you might recognize some other names on that list as well). Here's what they had to say:

"There are not many people out there that have heard of Georgia Southern’s Antonio Glover, but that needs to change because he could truly become one of the diamonds in the rough with his athleticism, physicality, and ball skills. He has the ability to play either high or low, and earned First-Team All-Sun Belt honors with his school record of six interceptions this past season.

His cover skills and athletic ability will surely intrigue teams as a player who can essentially do it all, but I think his durability will also intrigue teams quite a bit as he has started 27 consecutive games at strong safety for the Eagles. He may need to earn his role as a core special-teamer early on because of where he will get drafted, a 4th round grade on my board, but he has starter traits at the safety position that could be shown once given the opportunity."

Now the piece above calls him a strong safety which is fair because he moved around a lot, but he actually played a lot of single high free safety as well.

In case you missed it, the second twitter handle mentioned above is Glover's.

Check out the video below to see some plays he made.

The Bad: Level of competition is definitely a concern coming from the Sun Belt Conference. Size is also another concern. At 190 lbs you'd like him to add some additional weight on his frame to play safety in the NFL. However, his durability has never been a question despite his frame.

If you didn't watch the whole video above, scroll to the last play on the reel. Glover gives up the game winning touchdown against Georgia Tech in a game they should have won. What's sad is that he was in perfect position to make the tackle and stop the receiver short of the first down. Instead, he misjudged the ball and went for the interception, leaving him in no position to make the play and the ballcarrier easily shrugged him off for the score.

Status: I went into this review thinking it would be another practice squad candidate/camp body, but I really like what I see from Glover. He is my darkhorse to make the roster as our UDFA this year. He'll have a tough road since we just drafted two safeties, but if he can beat out Shiloh Keo, he might have a chance of sticking on the 53-man roster as a 5th safety. If he doesn't make it this year, I really like his chances next year of coming in a contributing since there will likely be more room at safety then.

I'll be keeping a close eye on him. With our track record, who knows. He could be the next great undrafted/practice squad guy to tear it up on our defense.