Broncos quarterbacks throwing deep in 2019 and 2020 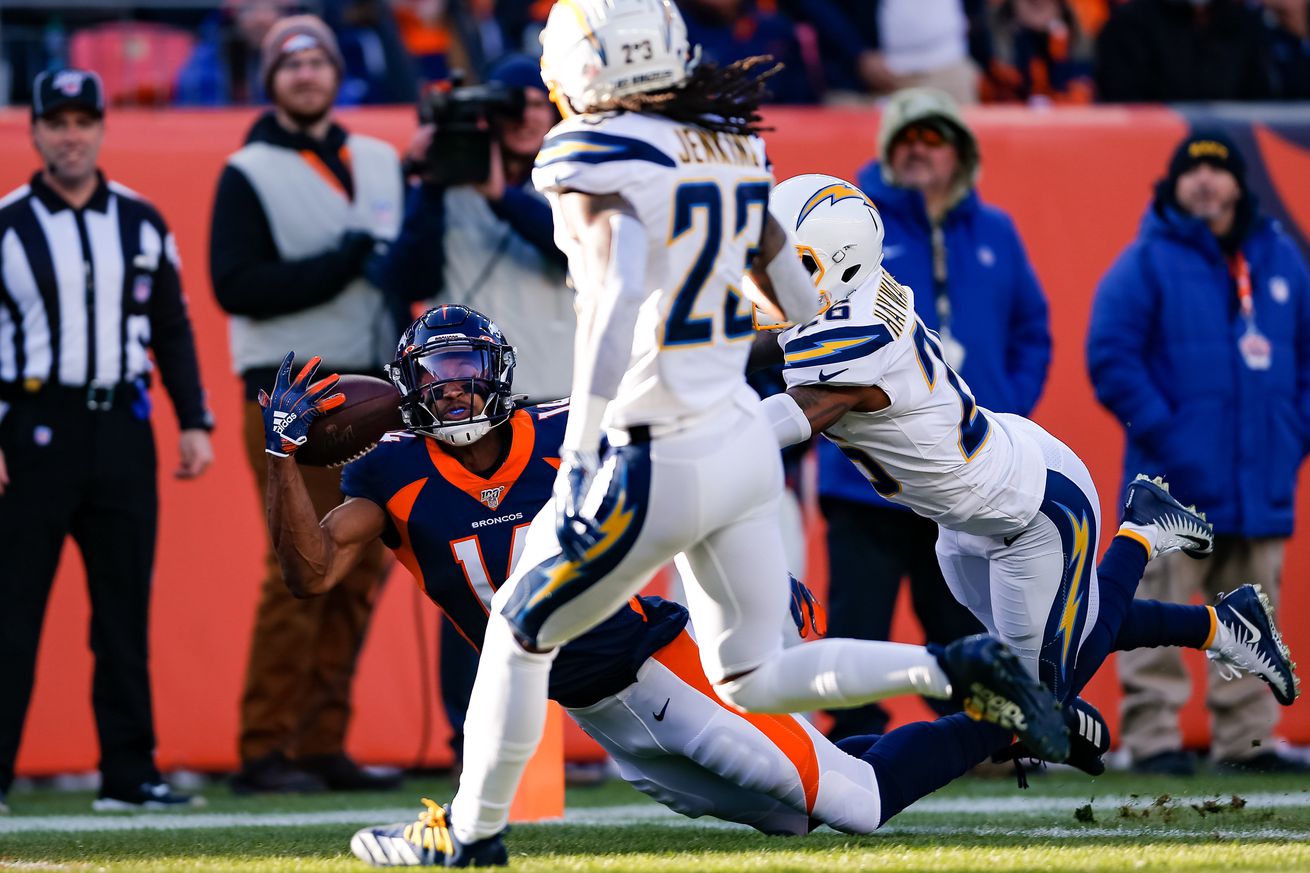 You need Deep threat receivers, a QB with a strong arm and an OL that is decent to effectively throw deep in the NFL. Here’s how the Denver Broncos fared in the 2019 season.

From NFL game reports, a deep pass is counted as a pass that travels 15 yards or more from the line of scrimmage. There are four things necessary in the NFL in order to be able to use the deep pass as a weapon:

For whatever reason, the Broncos did not do No. 4 - take shots down the field. The Broncos ranked 30th in deep pass percentage (deep passes/total dropbacks). Data comes from www.pro-football-reference.com.

It is interesting to note that of the teams in the top five for deep ball frequency, only KC and Green Bay were good at it (in terms of TD:INT). Aaron Rodgers had 10 TDs and only one INT on deep passes in 2019. Pat Mahomes had 13 TDs and only two INTs (Matt Moore threw the other three deep TDs for KC). The first down percentage is essentially the completion percentage which averaged 41.0 percent on deep passes in 2019. Comparing the four teams who threw deep the least often, you see that the Broncos and Bengals were very different from the 49ers and the Saints. The Broncos and Bengals didn’t throw deep because neither team was very good at it. The 49ers and the Saints were very successful when they tried it (best completion percentages in the league), but they chose to pick their spots very judiciously. Note that this does not factor in defensive pass interference calls that teams “forced” on deep passes. PFF has that data if you have a subscription and want to dig into that.

So why did the Broncos not throw deep much in 2019? The first reason is that Elijah Wilkinson is not very good at pass blocking. Opposing defensive coordinators know this and they took advantage of him. Beyond him, Garett Bolles was also inconsistent. So none of our three starting QBs had the luxury of clean pocket very often for deep routes that take longer to develop. For QBs with a minimum 50 dropbacks, our three QBs were pressured at different rates (total times pressured/dropbacks).

Brandon Allen was not pressured very often (10th lowest), while Drew Lock was in the middle (29th of 53) and Joe Flacco was near the bottom (39th of 53). Flacco was pressured the most frequently of the three. While Allen and Flacco had better passer ratings on deep balls (mainly due to completion percentage) - all three QBs had one TD and one INT on deep passes.

What’s telling is that Joe Flacco only attempted 37 deep passes in eight starts. Given his reputation as a QB with an arm and a willingness to throw deep, only four or five deep passes per game is much less that I would have expected. Here’s a comparison of all 51 qualifying QBs (min 10 deep attempts) deep passing results in 2019.

The fact is, none of our QBs threw deep very often in 2019. I think it was a different reason for all three, though. I think Flacco was afraid to throw deep, despite having two viable deep threats to throw to (Emmanuel Sanders and Courtland Sutton). In my opinion, Allen did not really have the arm to throw deep. This was on display in his final start against Buffalo where his limited arm exploited by the Bills defense. Lock has the arm and the willingness to throw deep, but he only had one viable deep option. This can be seen from his deep target selection.

Lock threw deep 23 times - 10 of those were to Sutton. Sutton had all three of our deep touchdown catches in 2019. Sutton was targetted on 33 of our 77 deep passing attempts - catching 14. Three of those were deep throw-aways that were not counted as a target of any receiver. Here are the Bronco receivers’ stats for deep passing targets in 2019. Note that this only shows Sanders’ stats with Denver.

Once Sanders was traded, it became much easier for opposing defenses to take away the deep ball option. All they had to do was double Sutton. Sutton’s 33 deep targets were tied for 15th most in the league. Top 20 deep receiving threats (from targets) shown below.

So what about 2020? Our incoming most recent new offensive coordinator, Pat Shurmur, spent the last two years as the head coach of the Giants. The Giants, playing mostly with a highly drafted rookie QB, Daniel Jones, were 21st in deep passing frequency in 2019 (see table from the beginning of the article). I don’t know if that is a function of Shurmur’s willingness, or lack thereof, to push the ball down the field, a function of playing with a rookie QB who didn’t want to push the ball the field, or a function of not being able to push the ball down the field because of limited confidence in their receivers as deep threats. The Giants OL was worse than Denver at allowing pressure on the QB in 2019.

The 2019 Giants had three different players who got 20 or more deep targets: Darius Slayton, Golden Tate and Sterling Shepherd. That trio combined for ten of the Giants’ twelve deep touchdown catches. They also had Cody Latimer, who was targetted 10 times on deep passes. Those four wide receivers combined for 33 of the Giants’ 40 deep completions in 2019. If you include their WR5, former Bronco Bennie Fowler, their five wide receivers combined for 87 of the teams 102 deep targets in 2019. This means that unlike the Broncos Giants had plenty of deep threats at WR. They at least had three, maybe four if you count Latimer, who caught four of ten deep targets.

So it would appear that Denver needs another deep threat. I would like to believe that Noah Fant can become one. He was not one in 2019. In 2019 tight ends were not used as down-the-field threats very often across the league. Travis Kelce had the most deep targets for a TE with 24. Only five TEs finished the season with more than one deep target per game: Kelce, Mark Andrews, Darren Waller, Zach Ertz and Hunter Henry.

I also have little confidence in DaeSean Hamilton becoming a deep threat. His two catches on ten deep targets did not inspire much confidence for his future. Maybe Tim Patrick can develop into a deep threat. His height and leaping ability show that he could be that for us, but his lack of speed limits his ability to threaten defenses down the field. So it would appear that the Broncos are going to need to draft another deep threat this year. Thankfully, this draft is loaded with WR talent, many of whom should be available at 15 if we want to use our first round pick on one. Alternatively the Broncos could bring in a free agent WR who is a legitimate deep threat. There are a few from the list above who are available this off-season, but I’d prefer to go the draft route.

Broncos quarterbacks throwing deep in 2019 and 2020