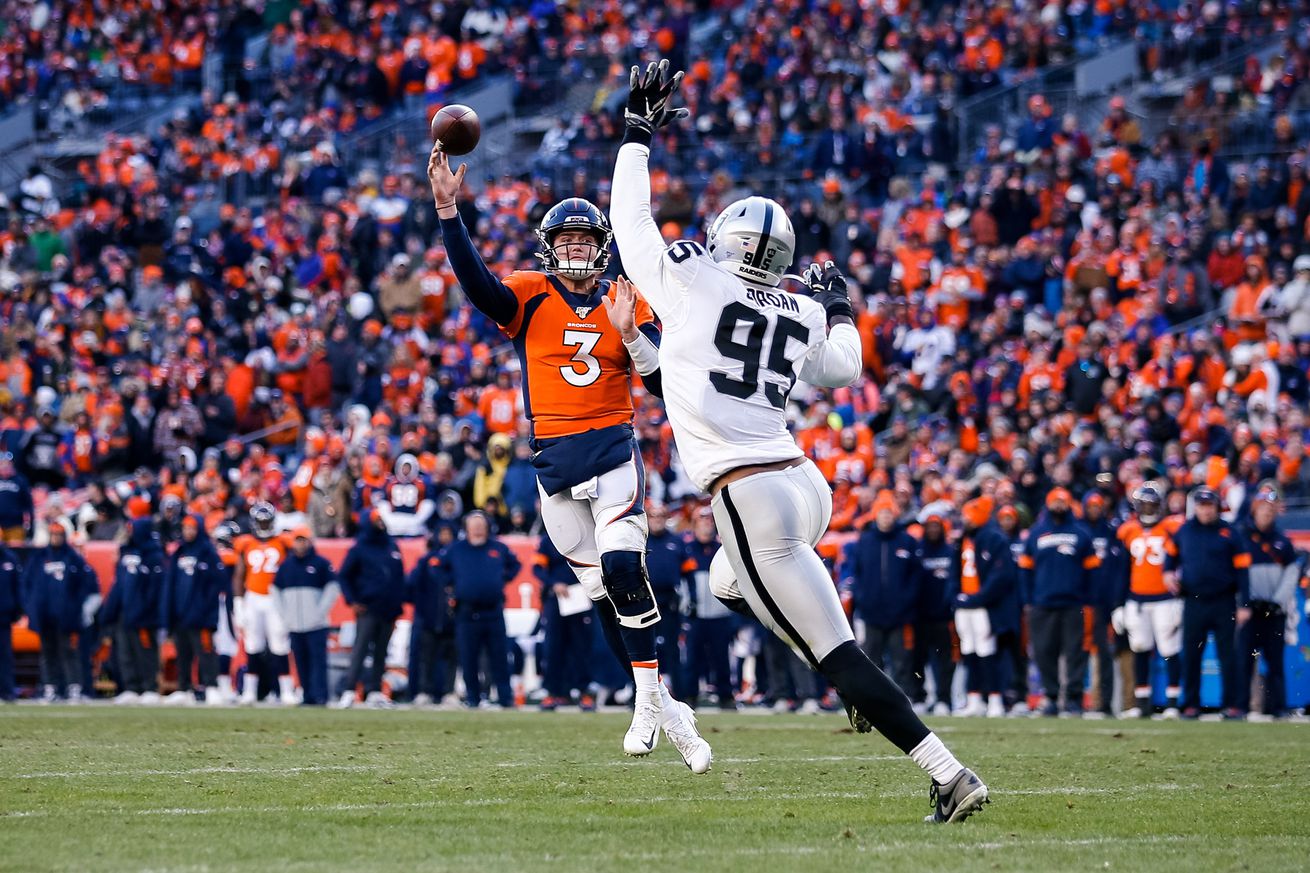 The Denver Broncos defense frustrated the Oakland Raiders in the red zone all game long as Denver closes season out with a 16-15 win over their AFC West rival.

The Denver Broncos and Oakland Raiders wrapped up the regular season with a defensive slugfest. Oakland would seem to be unstoppable between the 20s, but they could not find the end zone on any of their drives until the very end and there Shelby Harris would kill the two point conversion attempt to secure the 16-15 victory.

The Neighborhood Bar that Grew Three …
Three things I learned while circling…
Being a (Goth) Black Sheep … and Brin…
CBD 2020: What to Expect + Our Top Pr…
What Marathon Running and Successful …

Denver would finish the season with a home win over their hated AFC West rival to steal away second place in the division and a 7-9 final record. They finished the season 7-5 after an 0-4 start and rookie Drew Lock would finish 4-1 as a starter. There is plenty to be optimistic about heading into the 2020 offseason.

The Raiders would dominate the first quarter offensively, with both drives getting down in the red zone area. However, the Broncos were fortunate that one of those trips ended with a missed field goal. On their second drive, Darren Waller shredded the Broncos defense for a huge gain.

Darren Wallen torches the #Broncos on a TE screen. pic.twitter.com/kyhGgCdpIL

The Broncos offense, meanwhile, couldn’t get much going early with both of their drives in the first quarter ending in punts.

By halftime, the Raiders had out-gained the Broncos 251-108. However, they were just 1 for 3 in scoring points with their red zone trips and a costly turnover late in the first half helped the Broncos turn a 3-3 tie into a 10-3 lead.

Trey Marshall coming in clutch for the #Broncos D! pic.twitter.com/D6JBReXZ9l

Drew Lock has been efficient, but the offense hadn’t been able to get too many drives going in the first half. At the break, he was 10/15 for 92 yards and a touchdown pass.

The Broncos would continue to stymie the Raiders offense and keep them from scoring. The first punt of the day for Oakland came in the third quarter and they would punt again before it was over.

The Derek Carr experience in one play. pic.twitter.com/xrnYC1vrbz

Meanwhile, the Broncos offense began finding some chunk plays. They were stopped short on one drive due to some questionable decisions from Noah Fant who had both a holding penalty and also ran backwards when we was close to a first down marker. They did get a field goal to extend their lead to 13-3 and were driving late in the third quarter too.

Brandon McManus would booted a 51-yard field goal to start the fourth quarter to put Denver up 16-3.

On the Raiders next drive they looked unstoppable. They wasted no time getting to the Broncos 20 yard line with just under 12 minutes to go in the game.

Von Miller continued making his presence known to Carr. He has been close to a sack multiple times, but on this drive he hit Carr who threw the ball away. On the next play, Jeremiah Attaochu got there for the sack to force a third and long.

Attaochu gets home for a #Broncos sack! pic.twitter.com/xBwGV1awnR

The Raiders would not get close and they would kick a field goal on fourth and 12 to cut the score to 16-6.

Up by 10, it feed Phillip Lindsay time. He needed just six yards for 1,000 yards on the season. He got that on his next carry to become the first undrafted running back in NFL history to start his career with back-to-back 1,000 yard seasons.

With all of the momentum going their way and in Raiders territory, Royce Freeman would fumble at the 40-yard line to throw Oakland a lifeline.

After getting close all game long, Von Miller finally found the sack he was looking for. He made one of the craziest pass rush moves to get there too.

Von Miller with his 8th sack of the year! pic.twitter.com/xelPYEX0Mp

Desperation seems to always get this Broncos defense in 2019 though and a 48-yard completion down the field to keep this game interesting.

Fortunately, Carr would panic throw it out of bounds with no Raiders receiver anywhere to force a second and 20. Then he would complete a short pass underneath for six yards. Then on third and 14, they wouldn’t be able to convert. They were able to cut the lead to one score with a field goal to make it 16-9 with just over 3 minutes to go in the game.

After a quick three and out, the Raiders would have a chance to tie the game. After another drop on second down and an incompletion on third down, they were faced with a fourth and four that the Denver defense would close down for what should have been the 16-9 win.

Somehow, the Broncos offense would find itself in field goal range and then a Garett Bolles personal foul to a 57-yard field goal attempt that Brandon McManus would miss with over a minute and a half left in the game. Fortunately, the Broncos defense would keep things in bounds early in their drive.

With 36 seconds left in the game, the Raiders were at the Broncos 34-yard line. A deep pass down the middle was intercepted by Isaac Yiadom, but Renfrow wrestled it away from him for the catch and the first and goal opportunity for Oakland. Yiadom would removed his helmet and get a penalty to put the ball at the three yard line where they would score a touchdown two plays later.

The 16-15 win was only secured when Shelby Harris batted the two-point conversion pass attempt down.