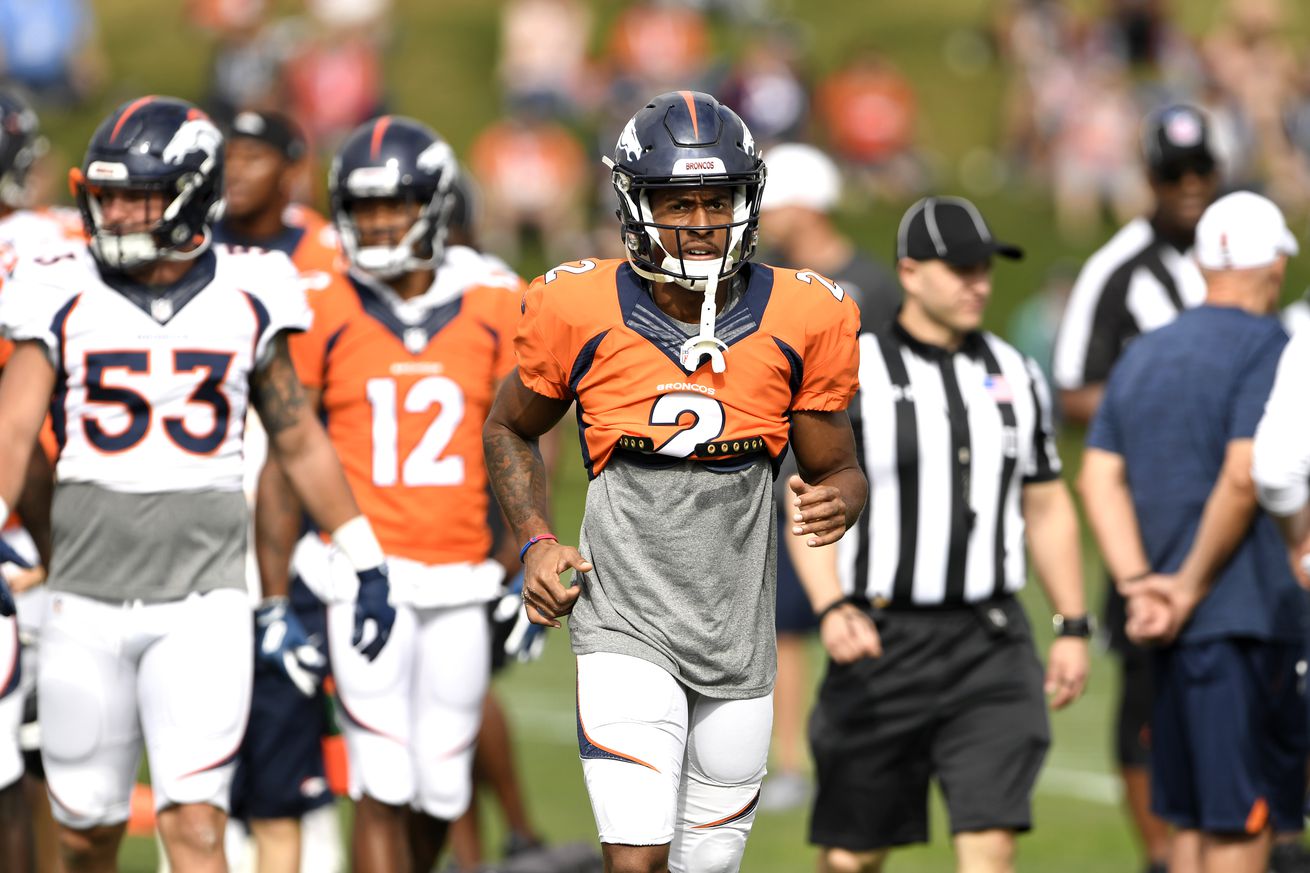 Good morning Broncos Country! The Denver Broncos had their first joint Practice session with the San Francisco 49ers. It didn’t go well for the offense.

The Denver Broncos and San Francisco 49ers took part in their first-round of joint practices before their Monday Night game. Well, for the Broncos, it was another rough showing for their offense.

"Part of being a good football team is responding to tough days."

It was a choppy practice by the Broncos offense which included interceptions, drops, and just overall bad play from them. This has been something that has happened off and on throughout camp and it reared its ugly head again during today’s practice.

Offensive Coordinator Rich Scangarello said after practice that he thought it was a “very choppy practice” and that they were beat upfront a bit by the niners defensive front.

Scangarello told reporters after practice that the offense must meet the 49ers defense intensity and adapt and adjust.

“My message to the offense is we have to meet their intensity obviously. Part of it is they’re playing a different style than they’ve played in the past and they’re doing a good job of it and it’s different for us, so you’re not game-planning necessarily for the practice. We have to adapt and adjust.”

Quarterback Joe Flacco told reporters after practice that he and the offense allowed the 49ers defense to set the tone and that they could never get it back.

“Yeah, it was like I said, I think we let them kind of set the tone. And we weren’t really able to kind of get it back and settle down to our style and things like that. Obviously in a practice tempo, when you’re not going and driving the ball and getting first downs and things like that—it’s not quite the same as a game—you can’t whether the storm quite the same. But that’s all part of it.”

The Broncos will have one more joint practice against the 49ers later today before their Monday night game. Hopefully for the Broncos and their offense, it goes much better than it did during today’s practice.

News and notes around the league

Kirk Cousins plans to look for more “off schedule” run opportunities – ProFootballTalk
Vikings quarterback Kirk Cousins may be adding something to his game this year: Scrambling. Coach Mike Zimmer recently explained that the team wants to see Cousins take advantage of the opportunities that may present themselves to tuck the ball and run, especially when the team's offensive weapon...

Anthony Lynn hopes Derwin James returns in 2019 but has no timetable – ProFootballTalk
The Chargers know they will begin the season without safety Derwin James. They don't know how many games he will miss with a stress fracture of the fifth metatarsal of his right foot. Coach Anthony Lynn said Friday he can't put a timetable on James' injury.

Goodell: We are all rooting for Josh Gordon to succeed – ProFootballTalk
The NFL has formally announced Patriots wide receiver Josh Gordon's conditional reinstatement from suspension. Gordon was suspended indefinitely last December and the league's announcement says he will be allowed to rejoin the Patriots for meetings and conditioning work on Sunday.

Dolphins QB Josh Rosen good, not great, in loss - NFL.com
In his first preseason start, Miami Dolphins quarterback Josh Rosen was decent against the Buccaneers, but he'll likely need more than that to win his ongoing battle with Ryan Fitzpatrick.

Giants QB Jones fumbles twice in up-and-down night - NFL.com
Giants rookie quarterback Daniel Jones saw more than one drive on Friday night, his second game under center for Big Blue, and showed the best and worst of his abilities in a win over the Bears.

What we learned from Friday's preseason games - NFL.com
The second gameday of Week 2 of the 2019 preseason saw a solid second start from Daniel Jones, Josh Rosen's first start in Miami and Clifton Duck's origin story. Here's what else we learned.