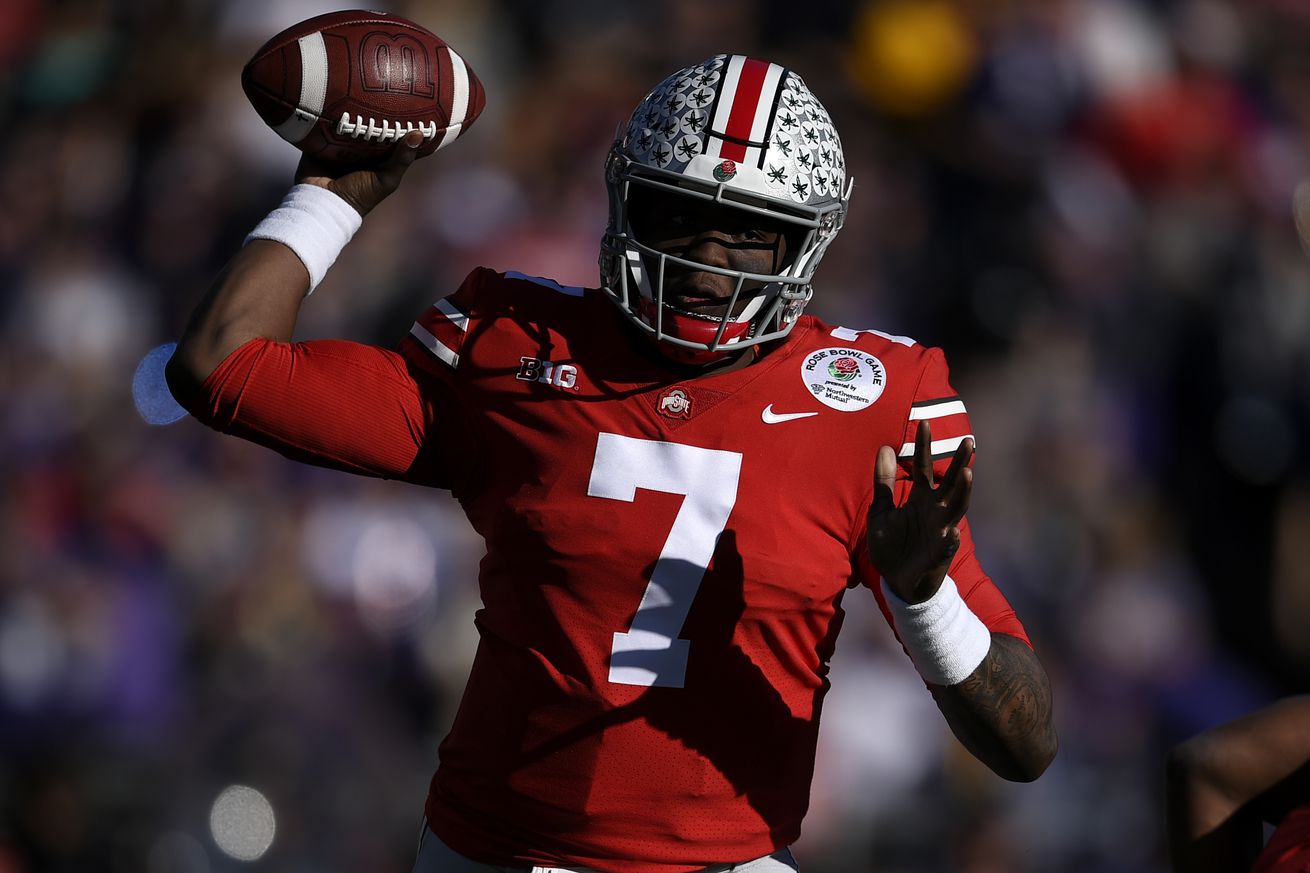 How could things go if John Elway grabs a new heir to the orange throne?

One of the best parts of running Mock scenarios for me is dealing with the crippling decisions opportunity cost your faced with. There is no situation where that becomes more painfully apparent than when you grab a quarterback in the first and spend the rest of the draft trying to fill needs while finding good value.

So I decided I’d try to do just that. If you hate the quarterback I went with, fill in your favorite signal caller. I’m not here to argue the merits of one QB over another (go here if you want that) but to show you how pulling the trigger will have a snowball effect on the entire draft.

Let’s get after it.

I thought I’d have to take Haskins over Oliver, but he went to the Bills.

Who would be the best QB for the #Broncos?

I kept this poll in mind as I made the pick, but if you want to believe I took Drew Lock here he was definitely on the board. (As an FYI- He’s always on the board at 10.)

There is still some lingering doubt for me as to Haskins fit in the Scangarello offense because of his lack of mobility, but he’s certainly accurate. Every interview I’ve listened to has hammered home how smart he is, the Buckeye is a student of the game. Generally I’m leery of 1-year starters, but there are some who would argue it means he’s still ascending. I made a vow to let y’all believe. At least until Thursday.

I think I'm going to make an effort to withdraw from the tired quarterback discussions until next Thursday. We're at the point where people are married to their stance regardless of any other view. pic.twitter.com/n3rrVBvZ5w

Now let’s build him a playoff team to step into down the road.

This was tough. I looked at Jeffery Simmons and strongly considered it. While Simmons is injured, he’s also #6 on my Day 1 Big Board after all. His ceiling is enormous and the value is really good in the second, but if Haskins is pressed into duty year 1 (and let’s be honest, the vast majority of round 1 QBs see the field year 1) he’ll need strong protection up the middle.

Playing in the SEC, McCoy has spent his entire career battling against future pros. He can step into a starting spot in camp and solve that position for the long term. He started every game the last 3 years at Texas A&M and should be ready to go from the opening day of training camp.

Best OL 40 time at #Combine was posted by @AggieFootball center @Erik_McCoy_73. Here is how 4.90 translates onto the field. pic.twitter.com/hXBle2MSfz

It came down to Sternberger or Dru Samia. The latter would serve as the heir to Ronald Leary, who looks like a longshot to stick in Denver after 2019. I love the Oklahoma guard’s fit in the Scangarello offense and he’s one of the best pulling linemen in this class. In the end, I just grabbed McCoy at 41 and know the 3rd to 4th swing will probably come with a run on tight ends. Haskins relied on throwing to the middle of the field at Ohio State so I want to give him a real option there.

Admittedly, Sternberger is a bit of a work in progress, but is probably the second best seam stretching tight end in this class. He didn’t test as well as Dawson Knox or Kahale Warring but looks so darn fluid in pads that I’m still really high on him.

He may need time to adjust to the pro game as he’ll need to improve his route running, hand placement, and footwork to reach his ceiling. That said, the Aggie gives Haskins a weapon in the middle of the field and the Broncos a promising tight end when they currently have more questions than answers at the position.

I did not plan on going offense again here, but it’s hard to pass on value. I’ve got a round 3 grade on Boykin but his ceiling is as high as any receiver in this class. The 6’3 and 220 lb receiver blew up the combine, and while his production at Notre Dame wasn’t eye popping, it was plenty good enough. Especially against press man coverage.

There is a bit of a positional overlap between he and Courtland Sutton, but if both can grow into their skillsets the Broncos will have two receivers who can run the top off the D and bully DBs at the catch point.

Sternberger, Boykin with Sutton and DaeSean Hamilton give both Flacco and eventually Haskins a talented corps to distribute to. Giving the new franchise QB a chance to light up the scoreboard.

Here is a perfect example of a player that saw a massive increase in perceived value after the combine. Standing at 6’4 220lbs, Boykin ran a 4.42 40, a 6.77 3 cone and nearly a 44 inch vert. On plays like this you can see some of those #’s on display pic.twitter.com/4kTMocGy5q

This was one of those picks where I knew it’d probably be a linebacker. The number of starting caliber guys is shrinking quickly here. I’m not as high on him out of his rookie camp as others, but given time I think Pratt has 3-down upside.

Pratt started just one year for Boston College and still managed to lead the conference in tackles per game. A former safety, he has the kind of range that can’t be taught and brings experience in space. If he can get better at taking on blocks and working angles in both coverage and against opposing ground games, he could be special.

It came down to Hjalte Froholdt, Foster Moreau, and Moreland. I’m really high on Burr-Kirven but thought it could be good to grab a ball hawk corner. Moreland will need time to make the jump from James Madison and it could take a little time. The payoff could be worth the wait though, as his ball skills and hands are elite.

The #Bears need to begin to look for Prince’s replacement. Moreland adds great value in the 7th round and would be a fantastic pick. He’s got great vision and speed. Super high ceiling.

This was an either or between BBK, Evan Worthington, and Drew Sample, but I went with my favorite Day 3 sleeper in this class. I’ve covered him at length here, but think a coaching staff that can look past his size will find an early contributor to nickel sets and a potential starter down the road.

He doesn’t come without weakness, of course. He could find some trouble outside of a Washington defense that had a mammoth defensive line to protect him, but the Husky is slippery off blocks and he seemingly knows where the ball’s headed before the offense does. He simply pops off the tape.

My latest for @CBSSports lists my biggest sleepers in the 2019 NFL Draft. And here’s my closing argument for Ben Burr-Kirven as LB1. https://t.co/1H3yrNuwz3 pic.twitter.com/Z2kkmM2Vck

So this came down to Donald Parham, Gaines, and Malik Gant. It was a tough choice as all three intrigue. Parham is a 6’8 athletic phenom from tiny Stetson who projects as an chess piece and mismatch receiver at the next level. Gant is a thumping safety from Marshall who looks like a stud special teamer.

Between the two is Gaines, who probably has a lower ceiling than Parham but will do more on defense than Gant. The 6’1 and 312 lb Gaines is every bit the plug you’d expect him to be. He’s not quick, but wins with effort and understands what he’s required to do his job. At his best he’s probably a 2-down Nose Tackle who eats the interior gaps in the base 3-4. In an NFL where the Patriots and others are moving to more I-Form and run focused attacks, that’s enough for a 7th round pick.

No draft eligible interior defender had more stops than Greg Gaines this season, and it really wasn't even close. pic.twitter.com/KGAq6tpzHQ

As I mentioned at the top, I wanted to do one last mock where I tried to build around a QBOTF. In order to help Haskins’ (or Lock’s) success I would prioritize building the offense so he could find early success. I think I did quite well with that in mind, but it’s impossible to wonder about some of the defensive players I passed on.

Be sure to let me know what you think Broncos Country.