Trevor Siemian could be why the offensive line is struggling 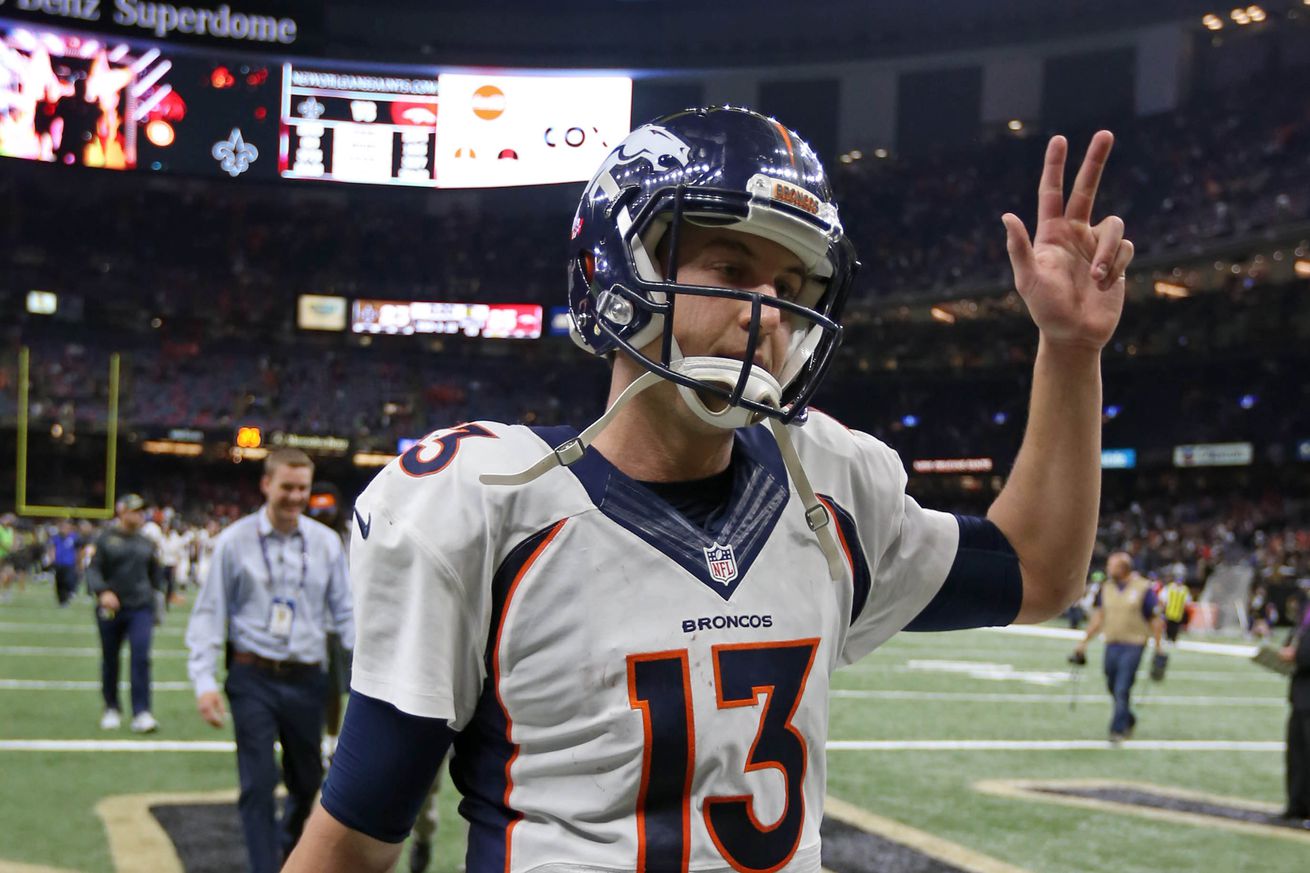 There are ups and downs, but here are a few things Trevor Siemian must get corrected over the Bye Week. If he can do that, the Denver Broncos could get really good, really fast.

One of the biggest sources of frustration for Denver Broncos fans is the perceived protection issues from the offensive line. A lot of it is, frankly, justified as the unit has struggled to sustain any kind of consistency in both the run game and in pass protection.

That said, a vast majority of comments either put all of the blame on the offensive line or all of the blame on Trevor Siemian. Here’s a news flash for those people, it’s a mix of both and Siemian isn’t doing the line any favors, as we’ll find out in this post.

What is Siemian doing wrong?

First, let’s hear from head coach Gary Kubiak on his surprising candor on Monday when asked how Siemian could avoid some of the shots he took against the New Orleans Saints.

“The reason he does make a lot of plays is because he will sit in there and get hit right in the mouth and make a play,” Kubiak explained. “That is a great characteristic of a quarterback because you have to do that sometimes. Right now, sometimes his depth is bad in the shotgun. [It’s] something we’ve got to work on. When it’s good, he’s stepping up. Sometimes he’s drifting and getting hit when he shouldn’t be getting hit so it’s something that we’re addressing and we have been actually addressing for about a month. It is something that we have to improve upon.”

“He gets on the road, gets loud, you get in the gun, you start getting away from the center a little too far and now all of a sudden you’re back there hitting 11 yards. We’re not going to protect you if you’re doing that. It’s just something that we have to improve with him.” - Kubiak

Big Al and DMac discussed this with Tyler Polumbus on Tuesday who described how Siemian has, in certain situations, put more pressure on the offensive line through his own actions.

The other issue is release time. This was a strength early in the season before defenses had film on his tendencies. But now? It’s been more of an issue since he came back from injury and its causing issues with offensive production.

“I think a lot of it is on me,” Trevor Siemian said of getting hit. “A lot of times, I”m holding the ball too long. I get what I deserve in that sense, but it’s a team deal, a team effort. … I can think of one I was deep on and that’s on me. I can’t do that to our tackles. That’s too tough on them.”

The data from NFL.com shows that anything under 2.5 seconds is above average, but as you get slower the sacks certainly seem to pile up. The average number of sacks quarterbacks in the top ten receive is around 14, while down in the 20-30 range where Siemian is its 19 sacks.

(Note: No data existed for the Tampa Bay Buccaneers game for some reason.)

When Siemian is on point with his time to throw (i.e. less than 2.5 seconds), he is sacked just over once a game. When he is above that mark, the sacks jump to two and a half times per game. Also worthy of note is that his two best passer ratings came during games when he was getting the ball out quickly.

This time to throw stat is not meant to be the end all be all as each quarterback and each team is different. Many teams are quite successful without the quick time to throw - Tom Brady for example.

My interest is purely the apparent correlation between slower release times and offensive line protection issues.

So what can Siemian do to fix this?

Some will take this entire post and consider it an attack piece on their guy, but really nothing I’ve shared here is an indictment on Siemian. Every one of these issues is coachable. As they sometimes say: ‘Thank God for the Bye Week’. As noted by Kubiak above, he will need to recover some pocket awareness and he’ll need to continue working on his decision-making.

In my view, Kubiak is putting together another remarkable coaching run. The way he guided this team to a Super Bowl championship in 2015 will go down as one of the least appreciated head coaching efforts in NFL history.

Right now he seems to be focused on giving Siemian the go ahead to go make plays and that’s what an NFL quarterback must do. What Siemian needs is confidence from the head coach to go do it.

“I think every player should be driven to be at your best all the time,” Kubiak said of Siemian’s confidence. “Trevor is no different. What I’ve seen with Trevor is I’ve seen some really good and I’ve seen some inconsistencies. I’m trying to get him to be more consistent in what he’s doing. I don’t like the fact that we’ve turned the ball over the last few weeks. He’s in charge of the football, whether you’re getting hit or not, you’re in charge of the football. I want Trevor to play big. I don’t want Trevor to play OK or good. I want Trevor to play big for this football team. If he can do that and get the ball in the right spots and protect the ball, with the formula that we had going yesterday, I think some really good things can happen for this team. I have big expectations for him and he knows that.”

Siemian will need to do all of those things in the final six games. The fate of the 2016 Broncos is now in his hands.

Trevor Siemian could be why the offensive line is struggling