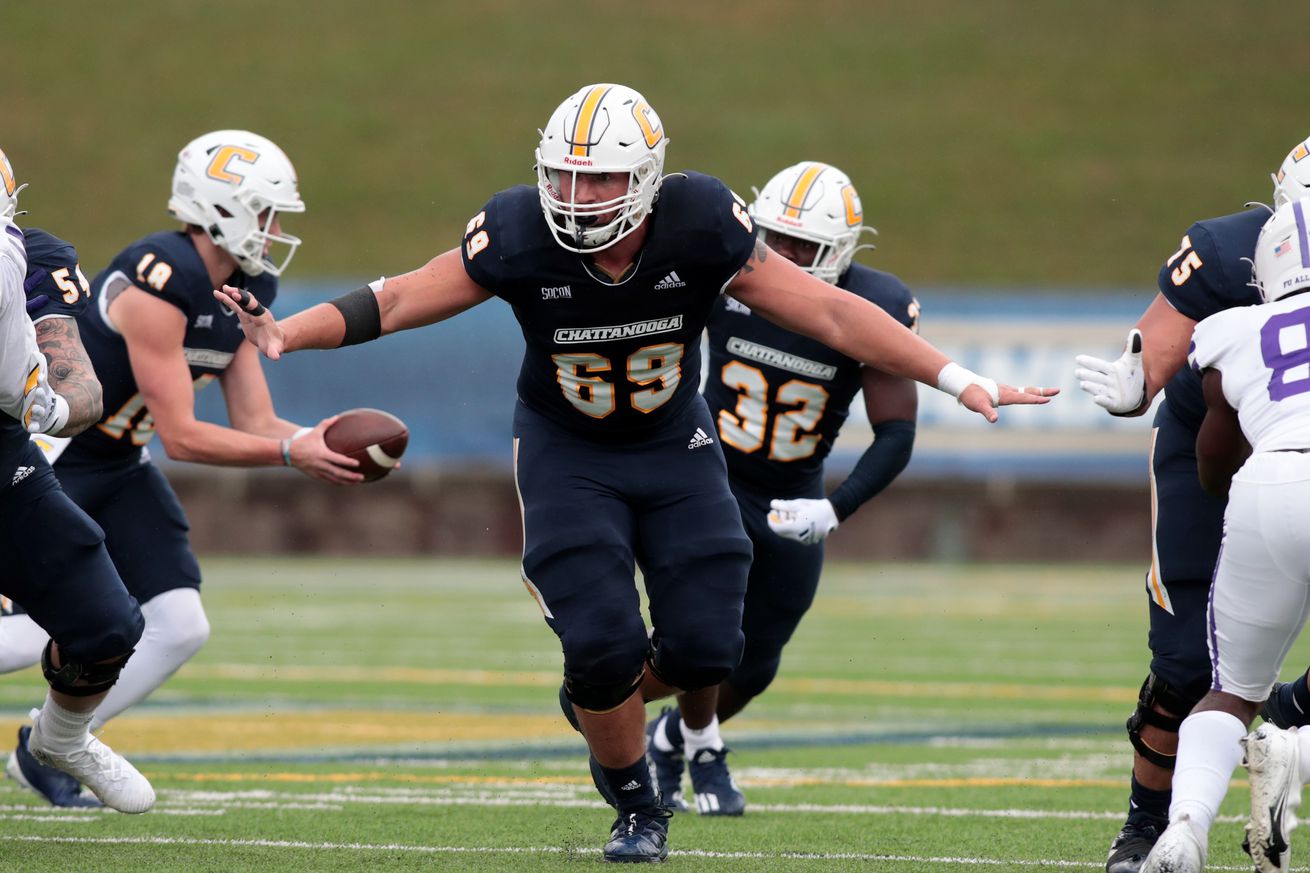 One of the most overlooked facets of building an offensive line is building the depth and developmental pipeline. Every team faces injuries, and the best offensive lines have enough depth to withstand those injuries and still field a unit the team can win with.

Every team needs a utility lineman who can provide depth at multiple spots to make naming game-day inactives easier and preserve spots at other positions. Even better if that utility lineman could be developed into an eventual starter.

And it seems as though every year there’s a small-school offensive lineman who takes the draft process by storm and shows that he can hang with the big-school products. This year that could be UT-Chattanooga left Guard Cole Strange.

The New York Giants (among other teams) ran headlong into the problem of not having enough depth on their offensive line in 2021. And as important as assembling a starting five will be for the Giants’ rebuild, they also need to build their depth chart to weather the inevitable injuries that come with an NFL season.

Strange has great experience along the offensive interior, getting 42 starts at the left guard position. He shows great flexibility throughout his lower body, showing good ankle flexion, knee bend, and an ability to keep his hips low in his stance. Strange does a good job of firing out of his stance with low pad level to establish leverage on defenders. In particular, he has shown good development in his ability to uncoil his hips, strike, and drive defenders.

Strange has great short-area quickness, agility, and speed for an interior lineman. He is easily able to mirror pass rushers on the interior, as well as get into position quickly to pick up stunts, twists, and late blitzes. Strange is also able to use his athleticism as a reliable blocker on zone running plays, as a pulling guard, and as a downfield blocker on screen plays. His experience, football IQ, and mental processing show up on the field as he passes off defenders on stunts and quickly recognizing late pressure.

He has surprising play strength for a light interior linemen, and routinely fights to sustain his blocks, as well as using good angles and positioning to create holes in the running game. Strange routinely tries to block through the whistle and finish with the defender on the ground when he can.

While Strange plays stronger than his frame would indicate, his build is awkward for the guard position. He can be uprooted or knocked off balance when his hips rise. While he was able to stand up against interior linemen at Chattanooga (including a strong performance against Kentucky), his height and relatively low playing weight could be a problem against NFL caliber strength and technique. Teams could struggle to find a natural scheme fit for Strange.

Strange’s tape, and his development at Chattanooga, suggest a player who can start at the NFL level. The question is, where on the offensive line does he play?

His long, lean frame might keep him from staying at the guard position (left or right). He uses his length well as a blocker, but his naturally high center of gravity makes maintaining low hips and good leverage an absolute necessity.

Strange is a very good athlete for the position and possesses great mental processing and awareness. That blend of experience, processing speed, and the athleticism to act on what he sees helps mitigate his unconventional build for his position at the collegiate level.

His frame and athleticism suggest that a move to offensive tackle could certainly be possible for him, but all of his collegiate experience is at left guard. His athleticism would translate well to center, as would his awareness and football IQ, though he is tall for that position as well.

A team looking to get Strange on the field soonest should at least try him at center, and only attempt to move him to tackle if he proves unable to stand up to NFL nose tackles. Transitioning to tackle might take a year, but he should be a good utility back-up for a team while he learns his new position.

Strange should also be considered somewhat scheme-limited. He is a good, reliable blocker in zone schemes, where his athleticism, length, and understanding of angles are advantages. He might not be a good fit in blocking schemes that rely heavily on man-gap concepts.

Off the field, Strange has already graduated with a degree in psychology and routinely had a 4.0 gpa.