Giants vs. Dolphins: What to expect when Miami has the ball 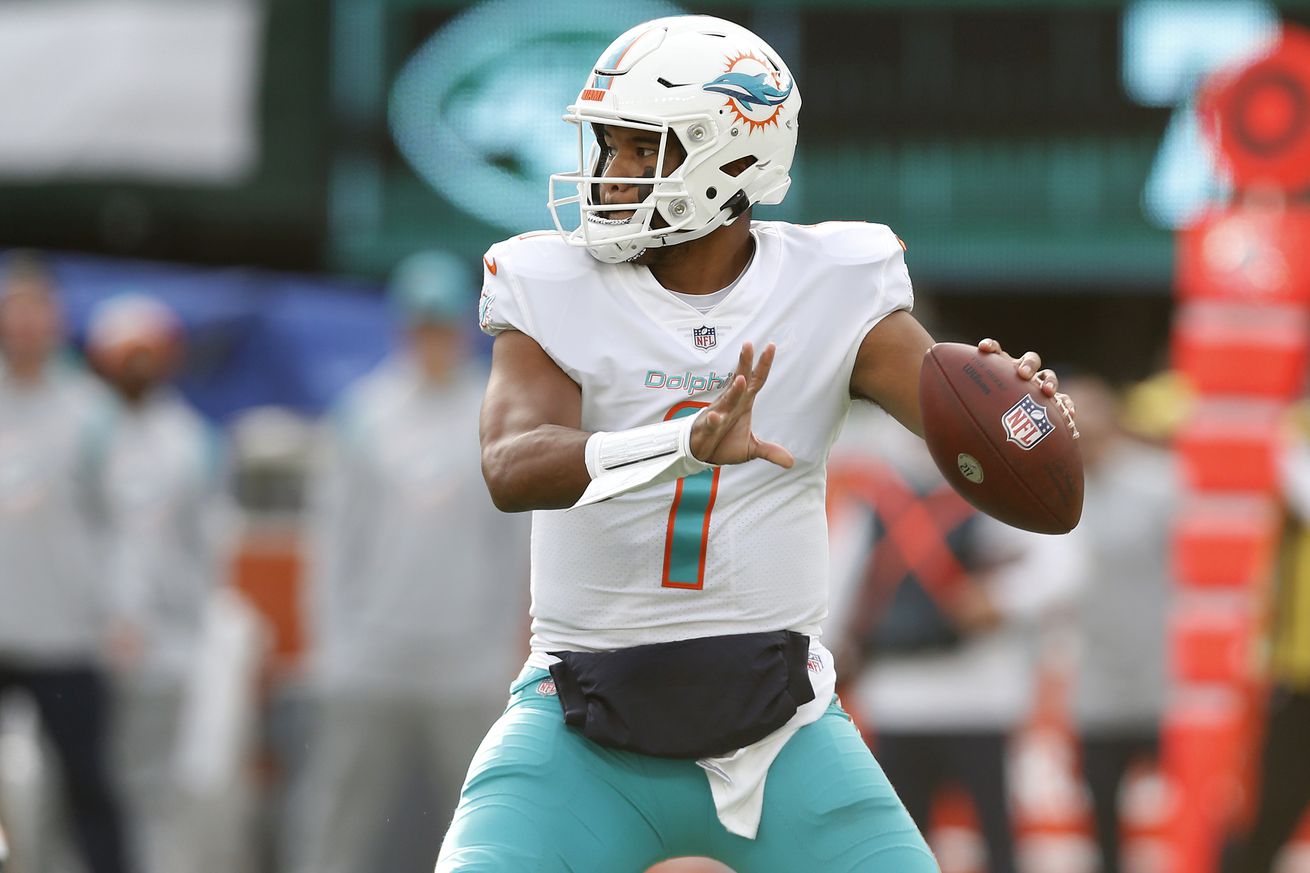 The New York Giants face the Miami Dolphins in Week 13. Miami is one of the low-key hottest football teams with four consecutive wins after starting the season 1-7. Quarterback Tua Tagovailoa is healthy and playing solidly while the defense is beginning to scratch the surface of its potential.

Binance has started to lose ground to…
Hiking the Cinque Terre: All you Need…

The Dolphins’ four-game winning streak commenced with a 17-9 defensive home performance against a 1-7 Houston Texans team. Miami carried the momentum into Thursday Night Football and defeated a much better Baltimore Ravens team 22-10 in convincing fashion. Miami also beat up on the Jets and Panthers, scoring 34 and 33 points, respectively.

Much like the Giants, the Dolphins’ defensive unit is the reason for their recent success, but the Miami offense is a better overall unit than the Giants’ offense. The Dolphins are averaging 19.5 points on the season, but 26.3 in the last three games (they had a special teams touchdown last week). For reference, the Giants average 18.4 points on the year and 15.3 in the last three games.

Miami’s yards per game is just below the Giants on the season at 310, but they average 351 in the last three games. Similar to New York, they are abysmal at establishing any rushing attack; Miami averages 80.2 rushing yards per game, which ranks 31st in the NFL. The Giants average 90 and rank 26th in the league. The Dolphins also rank 10th in rushing attempts, whereas the Giants rank 22nd. Miami attempts to run the football; they’re just not great at it.

The Dolphins selected Tagovailoa over Justin Herbert in the 2020 NFL Draft. That doesn’t exactly look like an excellent decision so far, especially with the multiple rumors about DeShaun Watson eventually landing in Miami that surrounds the Dolphins franchise. Confidence in the young signal-caller doesn’t necessarily seem evident from the Dolphins, but the lefty is certainly playing better than he did in his rookie season.

In seven games (Tagovailoa left one game and relieved Jacoby Brissett in another), Tagovailoa has a touchdown to interception ratio of 10 to 7 with 1,701 passing yards and a completion rate of 70.5 percent. That completion rate is second in the NFL among quarterbacks with at least 20 percent of their team’s snaps; the only quarterback higher is Arizona’s Kyler Murray.

Miami has a unique two-person offensive coordinator position, with George Godsey and Eric Studesville splitting the duty. The former has roots in New England - as does head coach Brian Flores - and the latter has more of a run game responsibility because he’s the running backs coach. The offense focuses on getting the football out of Tagovailoa’s hands to mitigate the risk of a shaky offensive line.

However, the 70.5 rate completion rate isn’t solely a product of the system. Tagovailoa averages 7.3 yards per attempt which ranks 18th in the NFL ahead of quarterbacks like Patrick Mahomes, Carson Wentz, and, you guessed it, Daniel Jones (6.7 average). Tagovailoa has improved this completion rate from a solid 64.1 percent completion rate in his rookie season.

Tagovailoa ranks about the middle of the pack in touchdown percentage with a 4.3 percent touchdown rate per drop back. According to Pro Football Reference, Tagovailoa ranks third in the NFL with on target percentage just behind Murray and Joe Burrow. His bad throw percentage also ranks 24th in the NFL. Statistically, Tagovailoa hasn’t played poorly this season. There have been times where he has made poor decisions and was almost intercepted - or was intercepted - but he’s playing better football of late.

He is benefitting from the Dolphins’ play-action and RPO attack. He has more than half of his yardage total from these types of plays. Miami has to utilize non-traditional methods to mask a terrible offensive line (sound familiar). Tagovailoa ranks second to last, just ahead of Russell Wilson, in time to throw in the pocket, so pressure may be something that Giants succeed with in Week 13.

Miami signed Malcolm Brown from the Los Angeles Rams in the off-season, and he split carries with Myles Gaskin and Salvon Ahmed. Brown’s been on Injured Reserve, leaving the lion’s share of the running back snaps to Gaskin with some utilization of Ahmed.

According to Pro Football Focus, Gaskin has been wildly inefficient - mostly due to a bad offensive line that ranks third to last in run blocking and dead last in pass blocking. He’s averaging 3.5 yards per carry and hasn’t been above 90 yards once this season. Gaskin is a weapon out of the backfield, and Tagovailoa looks to him frequently; hence his 53 targets (tied for fifth in the NFL). He also has six touchdowns on the year, with four of them being receiving touchdowns.

Gaskin will look to carry the load once again, but Ahmed will see snaps. He receives a handful of touches in the offense, mainly to give Gaskin a rest or if Gaskin fumbles the football.

Miami has suffered several injuries at the wide receiver position. Devonte Parker could be available against the Giants. He’s their big-bodied, contested catch, wide receiver who does an excellent job climbing the proverbial latter to win 50/50 balls. Parker hasn’t seen the field since Week 8.

Speedster Will Fuller has hardly seen action and is still nursing a hand injury. Preston Williams is a young big-bodied receiver that was undrafted in 2019. He has dealt with injuries through his young career, but he’s undoubtedly talented. Williams played last week, but he’s rode the bench in past weeks for issues related to the team.

The up-and-coming star of the offense is Jaylen Waddle. He’s not just speed, he has nuance as a route runner, and he’s starting to become the receiver many envisioned at the NFL level. Waddle just had a nine-catch, 137-yard, one touchdown game against the Carolina Panthers, and he has seen 101 targets this season while securing 77 of them. Waddle has a total of five touchdowns (one rushing), with 759 yards receiving.

The offense uses Waddle in the slot more often than not (61 percent slot snaps), and the Dolphins love to use him to spread the field horizontally. I didn’t see Waddle utilized vertically as much earlier in the season from the film I have seen, but his usage in that area has improved. Waddle should see quite a bit of James Bradberry, who has struggled with speed in the past.

Albert Wilson is the former Kansas City Chiefs wide receiver who still has a ton of speed. He can be susceptible to concentration drops, but he’s the second wide receiving option, but certainly not the second option in the passing game. He has 20 catches on 28 targets for 178 yards.

Mack Hollins and Isaiah Ford are also involved in the passing attack. Hollins has a large catch radius. He’s 6-foot-4, 215 pounds, and does a great job in the red zone, which is where he’s most utilized. He, too, has 178-yards; only he has three touchdowns on 22 targets (12 receptions). Ford has 108 receiving yards and a touchdown; he only played 12 snaps against Carolina but is a solid option when called upon.

The tight end position is very valuable for Miami. The Dolphins are in 12 personnel (one back, two tight ends) 61 percent of the time, which is far and away the most in the NFL. The next highest is Atlanta at 31 percent. Mike Gesicki’s unique ability is one reason why the percentage is so high.

Gesicki was an incredible SPARQ athlete coming out of Penn State. He is essentially a wide receiver who, at times, aligns as a tight end. The situation is similar to what Atlanta does with Kyle Pitts - one big reason these two teams lead in 12 personnel.

Gesicki is a jump ball machine with incredibly vertical ability. He is 6-6, 250 pounds, with 75 targets, 52 receptions for 596 yards, and two touchdowns. Miami also uses a lot of Durham Smyth, who is a good receiving option that aligns at H-Back. He’s played 469 snaps this season and has 25 catches (on 29-targets) for 253 yards.

Adam Shaheen and Hunter Long see snaps as third tight ends with an occasional appearance in 12 personnel. Long is a rookie out of Boston College who is seeing an increase in snaps with Shaheen recovering from a knee injury. Shaheen is a better blocker and a bit more dynamic as a receiver than Long. However, they’re both solid receiving options out of the backfield, although Long is still searching for his first NFL target.

The Dolphins have a bad offensive line. Austin Jackson, a first-round selection in 2020, was supposed to be the left tackle of the future. As many expected, he was too inconsistent, so Miami uses him at left guard.

In the entire NFL, three of the top five linemen with most pressures allowed are Miami Dolphins. Jackson, and then both starting tackles, rookie Liam Eichenberg on the right side, and left tackle Jesse Davis. Eichenberg has short arms, and he could find it difficult blocking Azeez Ojulari - a player he’ll see often on Sunday.

Davis has played several seasons with the Dolphins. I haven’t watched much of his film other than quickly going over Dolphins tape, but it appears he struggles with quickly handling stunts, and his pass protection from a footwork and hand standpoint suffers when he’s dealing with a bit of power. Expect T/E stunts headed towards the right tackle with Dexter Lawrence.

Robert Hunt scored one of the most impressive non-touchdowns (called back) anyone will ever see.

He’s a good athlete, and he’s pretty familiar with Giants’ offensive line coach Rob Sale. Hunt attended Lousiana-Lafayette, and he was one of Hunt’s two offensive linemen selected in the 2020 NFL Draft (the Steelers Kevin Dotson is the other). Hunt may be their best offensive lineman, but he’s an average starter in a mediocre situation upfront.

Miami also has Austin Reiter at center. He’s not having a perfect season, but he’s far from the biggest issue on the offensive line. According to ESPN, Miami’s offensive line ranks last in pass blocking win rate with a 45 percent mark - that’s not good. The Giants need to find ways to pressure the Dolphins offense and bait Tagovailoa into mistakes. With the Dolphins’ offensive line, they should find some success.

This post first appeared on Big Blue View, A New York Giants Community, please read the originial post: here
People also like
Binance has started to lose ground to Crypto.com, Coinbase and FTX, according…
Hiking the Cinque Terre: All you Need to Know

Giants vs. Dolphins: What to expect when Miami has the ball