Film study: Can Evan Engram be “The Guy” for the Giants? 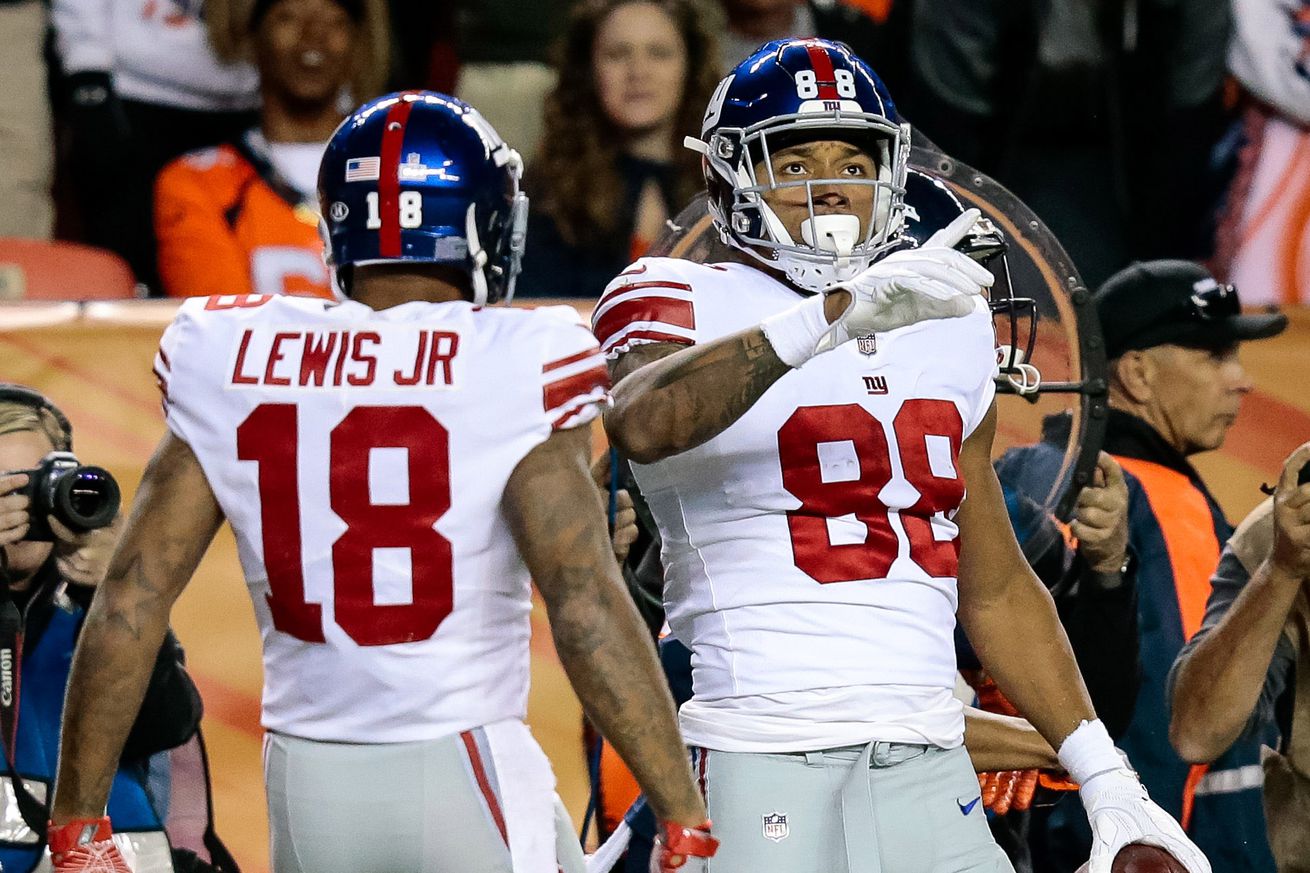 How did the Giants’ rookie Tight end really play against Denver?

The New York Giants had to address the tight end position after the 2016 season. They signed Rhett Ellison as soon as free agency opened in 2017 to add a physical blocking presence that they have lacked since 2012. But while he is a stout blocker, used to doing so as a tight end and fullback, Ellison is hardly known as a receiver. So it was still expected that the Giants would take advantage of the the incredibly talented class of tight ends in this year’s draft.

What wasn’t expected (by anyone outside of Big Blue View), was that Evan Engram, the undersized “hybrid” tight end out of Ole Miss would be the pick.

While O.J. Howard caught the eyes of scouts and evaluators with his size and Alabama pedigree, Engram quietly made the case that he could be mentioned in the same breath.

Of Engram’s week at the Senior Bowl, Tony Pauline of DraftAnalyst.com said:

Engram had three terrific days of practice and improved his draft grade. He was athletic, natural catching the ball and surprised people with his blocking strength. He easily got downfield to come away with the tough grab and at the same time controlled opponents as an inline blocker.

Engram built on that performance with an incredible workout at the NFL Scouting Combine that established him as the most rawly athletic tight end in an incredibly athletic draft class. But still, his size, 6 feet, 3 inches, 235 pounds, held him back in the eyes of the media. Would he be big enough to be a tight end at the next level? Or would he just be an over-sized receiver?

The Giants made the leap of faith that Engram could be a true tight end, and passed on offensive tackles Ryan Ramczyk and Cam Robinson to select Engram in the first round.

After a nightmare game against the Los Angeles Chargers that saw four of the Giants’ five receiver go down to injury, drafting the hyper-athletic receiving tight end looks strikingly prescient.

Engram is now the Giants’ most dangerous receiving option, so let’s look at how he did against one of the toughest defenses in the NFL.

We’ll kick things off with Engram’s first reception of the game, on New York’s first drive of the game.

The Giants are in their “11” personnel package, with Engram as the lone tight end (in-line) and Shane Vereen as the running back. Due to time constraints you can’t see it, but Vereen starts the play split out wide as the “X” receiver, but motions back into the backfield. That motion by Vereen, which was followed by safety Will Parks, shows Manning that the Broncos are almost certainly in man coverage — Cover 1, to be exact. It’s an aggressive defense, and combined with the Broncos showing heavy pressure, Manning knows he has to get the ball out quickly, but also that his receivers will likely have 1-on-1 match-ups.

That is exactly what Engram sees.

The Giants keep Vereen in to block, and the Broncos send six rushers, with Parks coming on a “Green Dog” blitz.

(A Green Dog blitz is when a defender keys on a running back or tight end, dropping in coverage if they release into a route or coming on a blitz if they stay to block)

Engram runs a simple “In” route, pressing the stem of his route into the defender and up to the 35-yard line (one yard past the first down marker). He is physical at the top of his route, using his 40-pound weight advantage to out-muscle Parks and create plenty of separation to make it an easy pitch and catch. Engram is able to use his speed to pick up yards after the catch and turn a seven yard first down into an 11-yard gain.

For our second play we fast-forward to the third quarter with the Giants protecting a two-touchdown lead. They come out in their 12-personnel package, with Engram and Rhett Ellison each lined up in-line.

The Giants had much more success Sunday (and commitment to) running the ball than anyone could have predicted. Because of that, in part, Denver matches the Giants’ heavy line with an eight-man box. The evenly-spaced stacked defenders makes it difficult to tell if they are sending pressure or dropping into coverage (man or zone).

The whole play is designed to get the ball into Engram’s hands. The wide receivers both run vertical routes to clear the corners out and push the free safety up the field. Ellison and Darkwa both release into routes to help clear out a void underneath for Engram. Ellison runs a seam route to force the zone coverage up the field while Darkwa runs a wheel route to pull the OLB away from Engram. The result is a wide-open space underneath and plenty of room for Engram to catch the ball, turn on the jets and pick up plenty of yards after the catch.

Linebacker Todd Davis picks Engram up in coverage, but underestimates the rookie’s speed and takes a bad angle. It all combines to produce an easy 21-yard gain for Engram and the Giants.

Now we’ll go back a bit to look at Engram’s touchdown reception.

The Giants are knocking on the door to the end zone, a place they have struggled to reach. They are a in their two-tight end package, with Ellison as an in-line tight end and Engram in the slot on the right side of the formation.

Once again the Giants use motion, moving Ellison from left to right across the offensive formation. The Broncos are showing man coverage on the outside with zone coverage underneath.

As in our previous play, this play is designed to get the ball to Engram with room to run. Tavarres King runs a corner route at the top of the screen to force the defense to respect that side of the play, but he isn’t really involved in the play. This is really just a two-man route combination.

The Giants keep both the running back and tight end home to block while sliding the pocket to the play side. Wide receiver Roger Lewis Jr. runs a slant route, forcing his defender into the slot defender’s zone. The result is a really well executed rub route, with Lewis and his defender effectively serving as a blocker without actually blocking (which would be an illegal pick play).

The rub prevents the slot defender from picking up Engram, creating all the separation he needs to catch the ball underneath and run it in for the touchdown.

For our final play I wanted to check in on Engram’s run blocking. He may be the Giants’ new “Number One” receiver and most dangerous receiving option, but he is still a tight end. And as a tight end, he has to — occasionally — block, which he does here on what might be the biggest play of the game.

The Giants’ defense had just come up with a terrific fourth down stand at the goal line to keep the Broncos out of the end zone. The downside was that it gave the Giants’ offense the ball with no room to work, and against one of the most fearsome defenses in the league. This is an obvious running situation, and both teams know it.

The Broncos stack the line of scrimmage, with six men on the line and a pair of linebacker behind them. The Giants are in their heavy “12” personnel, with Engram next to left tackle Ereck Flowers and Ellsion next to Justin Pugh on the right.

The Giants use an inside zone run, and the offensive line executes it very well. Up front, center Brett Jones fires off the ball and uses his natural leverage to get uner the nose tackle’s pads and open one side of the running lane. Right guard D.J. Fluke does a great imitation of a snow plow, collapsing the left side of the Broncos’ defense, giving Jones room to push his man away from Darkwa and creating plenty of running room.

On the left side, Flowers and John Jerry double team the 3-technique off the snap. while Flowers mauls the defensive tackle while Jerry works off the double team to block the linebacker who comes up to fill the gap. He doesn’t dominate the linebacker, but does enough to make the other half of the lane and give Darkwa room to get through the line of scrimmage.

Engram has the unenviable task of having to block Von Miller (who is effectively a defensive end on this play) one-on-one in a situation where a stop in the backfield completely changes the complexion of the game. Few tight ends would really win that match-up, but Engram plays with solid technique and leverage, preventing Miller from getting any penetration, which is all the Giants could have asked of a rookie tight end blocking an All-Pro linebacker with (at least) 10 pounds on him.

He didn’t dominate the box score, but Engram had himself a game Sunday night. He was drafted to be a Cover-2 buster, to make defenses pay for trying to contain Odell Beckham Jr. But now the Giants need Engram to not just take a step, but to make a leap and be their primary play-maker on offense. He might have the most raw athleticism of any tight end in the NFL and experience playing out of a number of alignments.

But still, being The Guy is a lot to ask of any rookie. Beckham was able to do it in 2014, and his play rocketed him to super-stardom in the process. He was a unique rookie who came in with a rare combination of uncommon athleticism and a pro-ready understanding of his craft. Engram certainly has the athleticism, and as a four-year starter in college, he is further along in his development than many rookie tight ends.

But that being said, fans shouldn’t expect him to become the focus of the offense in the way that Beckham was. But he could thrive as a mismatch and become a big part of the offense.

Film study: Can Evan Engram be “The Guy” for the Giants?