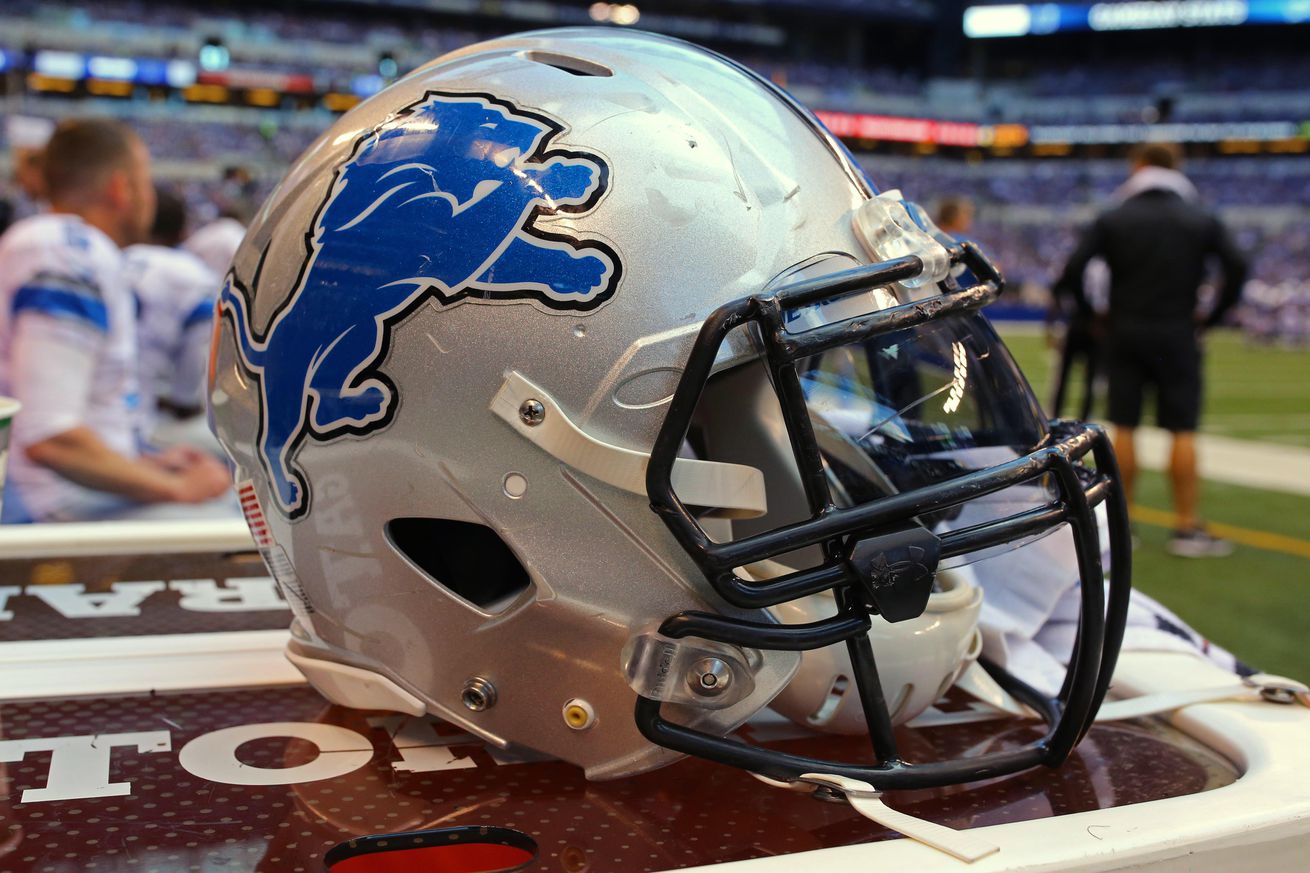 Tracing the history of the Detroit NFL franchise

The very first night game occurred in 1930 between the Portsmouth Spartans and the Brooklyn Dodgers. No, this is not a Major League Baseball game, but a game played in the National Football League (NFL).

Cannabis Stocks are Hot on the Watchl…
Boston’s Fidelity: A new face of the …
Best Gaming PC Build for 1080p: Under…
Beautiful Celebrity Couple Pics
Three things I do to not be S.A.D. wh…

After Joe Carr became commissioner of the NFL he began a campaign to weed out the small-to-middle sized clubs; which were typically community teams made up of mostly locals. His thinking was that the league could only grow into major league status if it had major league cities. Carr made life more difficult for the existing smaller populous franchises and even crafted the entrance fee $2,000 more than an entity which represented a large city.

He came up an ingenious idea that he felt would benefit the league. He offered any small city the opportunity to leave the league for a full season in order to reorganize their team and help create more funds. Seven of the 13 franchises did just that, and in the end none of them ever returned for re-admission. Carr made it known that it would become a rare opportunity for a small city to gain an NFL club. 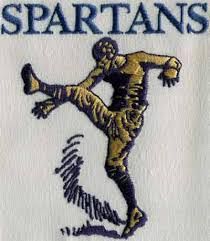 Portsmouth was only a small town with a population of about 43,000 but was considered by many to be an up-and-coming city. The local economy was strong with Wheeling-Pittsburgh steel manufacturing, the largest manufacturer of paving bricks in the U.S., plus it was a booming shoe town with four factories.

The city already had a football team made up of semi-pro players from West Virginia, Kentucky as well as Ohio. Their team, called the Spartans, played against a number of teams across the Midwest. The 1928 Spartans would go 9-3-2.

The citizens built a new stadium and then applied for admittance into the NFL prior to the 1929 season, to which they were refused entry. The 1929 squad finished 12-2-1 including games against the Green Bay Packers and Minneapolis Redjackets – both NFL teams. This version’s club would sport 10 shutouts. After the second successful year, Portsmouth applied again for admission into the NFL. This time, there were circumstances.

At the time many NFL teams would schedule several non-league games with opponents that were closer to home in order to round out a schedule. When the Packers barely defeated the Spartans, Green Bay was the defending NFL champs. In this same year, the Chicago Bears and the Packers had each lost to the Memphis Tigers, another semi-pro club. Carr felt that if good minor league teams like the Spartans and Tigers kept beating his professional teams, the major league status he craved might become diluted. So with the new stadium and the new attempt, the NFL owners approved the Spartans becoming a league member for the 1930 season.

The Spartans won their first game over the Newark Tornadoes 14-6 before an enthusiastic home crowd. 10 days later, Portsmouth would defeat the Dodgers 12-0 under the lights. At season’s end they finished 5-6-3, but had played such stalwarts as the Chicago Cardinals, the New York Giants as well as the Bears and Packers.

Small town teams such as the Packers and the Spartans viewed their pro football teams as valuable community assets. 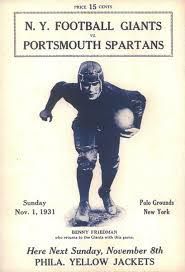 The 1931 season saw great improvement as the club won their first eight games. As they neared completion of the season they had important games against the Bears and the Packers. Green Bay was in first place - two games ahead of Portsmouth. The Packers had two games left with the Bears and Portsmouth. The Spartans defeated the Bears despite Chicago stars Red Grange and Bronko Nagurski to go 11-3-0 while Green Bay lost to Chicago. This put the Packers at 12-2-0 and one game up in the standings with the December 13 Green Bay – Portsmouth game left to play. In the meantime, the Packers stated that the final game was only tentative and not a real scheduled game, and so they simply cancelled it. At the time there wasn’t a playoff system, so the team with the greatest win percentage was crowned the champions; thus, Green Bay again became league champs.

Atop the standing of that 1931 season were the league’s smallest markets – Green Bay and Portsmouth.

To start the 1932 season the NFL lost the Providence Steam Roller, Frankfort Yellow Jackets and the Cleveland Indians to bad finances and then added the Boston Braves for a smallish eight club league. Again, the Spartans had a great team.

With ties not counting the standings, going into the final weeks the Packers again were in first place with a 10-1-1 record (.909 win percentage) while the Spartans (5-1-4) and Bears (5-1-6) languished in second place with identical .833 win percentages. Green Bay had both the Spartans and Bears remaining on their schedule as road games.

First up was the Spartans. An overflowing crowd was waiting for the hated Packers. It was reported that eggs were thrown at Green Bay’s bus when it arrived. An extremely strong wind prevailed for most of the match. In a very famous game, head coach Potsy Clark announced to his team that he was only going to play 11 players regardless of injury. The Spartans prevailed 19-0 in front of a joyous multitude. This game has been coined the “iron man game.”

The Packers would also lose to the Bears. This put Chicago and Portsmouth in a two-way tie for first place and the league title in the balance. A one game playoff, the first-ever playoff game in NFL history, would be scheduled in Chicago at Wrigley Field.

Days leading up to the game a horrible snow storm came through. Blizzard conditions forced the game to be played indoors at Chicago Stadium, home of the hockey Blackhawks. There were issues though. For one, the field was only 45 yards wide by 60 yards long goal line to goal line. Back then, the next play was spotted where the player was tackled. This meant sometimes the next play would be a few yards from the sideline. For an indoor game with hockey sideboards, this simply would not work, so Halas drew lines up and down the field 10 yards from each sideline. So, for this one game, if a player was tackled near the sideline the very next play would begin at the closest painted line.

Thus, hash marks were invented. Other rule changes had to instituted: kickoffs were from the 10-yard line, a down would be lost when a player goes out along the sideboards, all touchbacks brought out to the 10-yard line as well, no field goals were allowed and passing would be allowed anywhere behind the line of scrimmage (the rule at the time was only five yards back).

The Spartans were without their star quarterback Dutch Clark who after the final regular season game had returned to his off-season job of head basketball coach at Colorado College. With the small arena, both teams were able to pull their defenses in close as opposed to the larger outdoor venue. Another disadvantage to the game was that the circus had just left Chicago Stadium. This meant the entire playing surface was mainly dirt (with the occasion dung pile). Portsmouth dominated the first half, but neither team was able to score.

In the fourth quarter the Bears scored a touchdown plus a safety to win 9-0. The following year the NFL developed several new standards from this season: hash marks, two divisions instead of one, a playoff system to determine the league champion, and passing was allowed from anywhere behind the line of scrimmage.

The next season would be the Spartans last. They limped to a 6-5-0 record as they lost four of five games by seven points or less. The season brought about financial problems. On most practice days 3,000 more folks would show up to watch practices than to pay to see the game. This was at the end of the Great Depression and many simply could not afford to see their home games. Those who could afford a ticket bought one, unfortunately, the town was hurting financially and the gate suffered. Towards the end of the season many players were given shares of stock in the team rather than paychecks.

In the spring of 1934, negotiations to purchase the Spartans began with radio station owner George Richards of Detroit. The team would eventually be sold for $21,500; with $5,000 of that amount allocated to cover all of Portsmouth’s debts.

The franchise was relocated to Detroit and christened the Lions (as a tribute to the baseball Detroit Tigers). While in their brief four seasons in Portsmouth, the Spartans had compiled a 27-16-7 record, good enough for a .851 winning percentage.

The Lions went 10-3-0 in their first season in Detroit, good enough for second place in the division. The following season (1935), the Lions defeated the Giants 26-7 and won the NFL title. The Lions roster was still coached by Potsy Clark and was mainly comprised of the same Spartan players. Each Lions player received $300 for the win, but the City of Portsmouth got the satisfaction that their Spartans had finally won the NFL Championship.