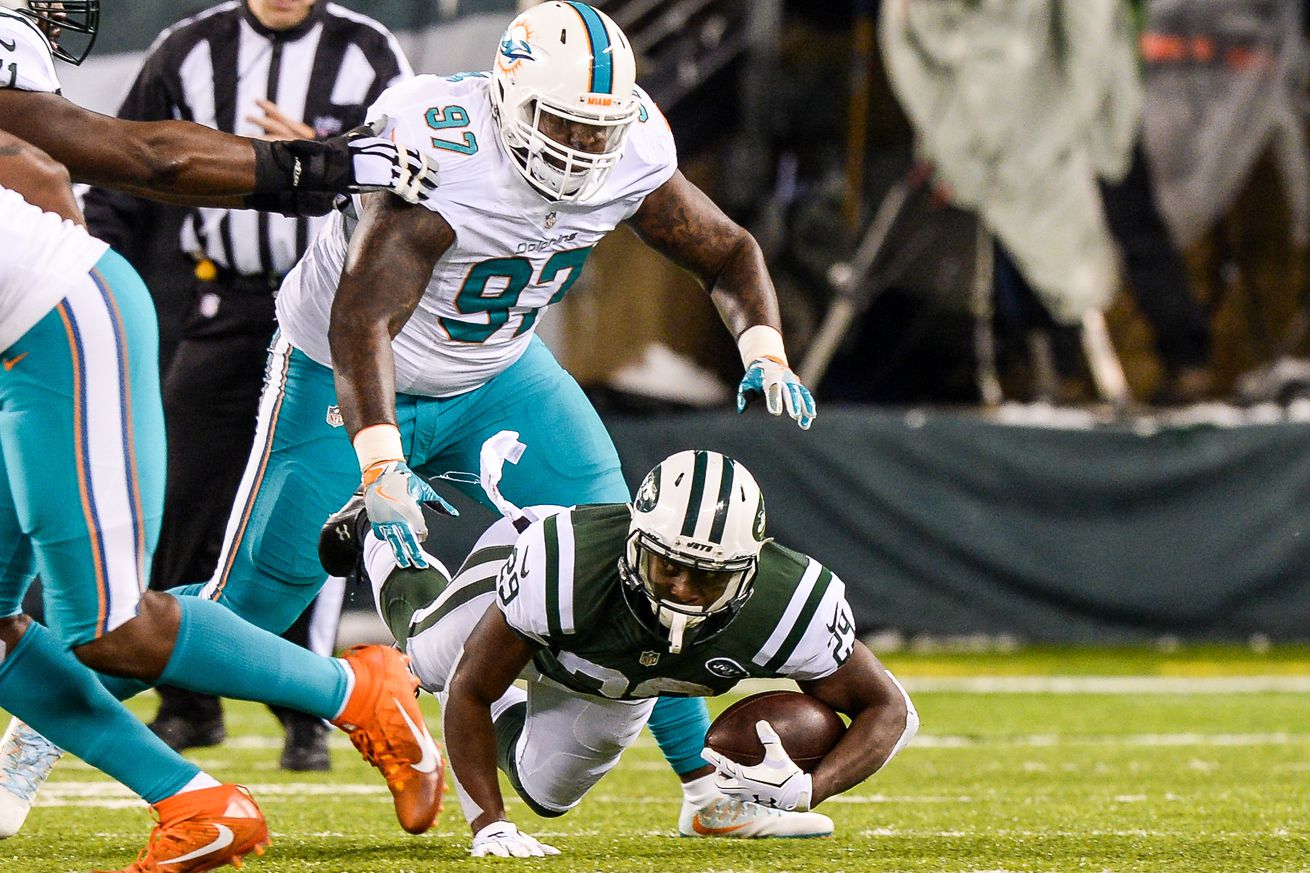 When the Dolphins selected Oklahoma defensive tackle Jordan Phillips in the second round of the 2015 draft, the chatter started immediately. Said Mike Mayock: "Jordan Phillips has first round ability all over him. He can dominate at the point of attack, he controls the run game. He reminds me of Terrance Knighton. People question his football character, which is why he's being selected in the second round and not in the first." Phillips, who, with a September 1992 birthdate apparently was named after NBA star Michael Jordan, has tremendous physical talent that allows him to pull off feats that could well be called Jordanesque. How many 6'6", 335 lb athletes have you seen do a backflip? Because he plays on defense during an era in which offensive football is all the rage, not much was said when Phillips pumped out 28 reps at 225 pounds on the bench press at the 2015 scouting combine. However, a man whose arms measure nearly thirty-five inches in length being able to lift that much weight that many times is downright ridiculous. From a physics standpoint, it's not too far off running back Chris Johnson's 4.24 forty time in 2008, in terms of improbability. According to Bill Parcells' 'Planet Theory', there are only so many guys on the planet with physical talent like that who can play football, and when you have a chance to select one of them in the draft, you do it.

There is no way Phillips should have gone in the second round of the draft, much less the 52nd overall pick. However, because there was a glut of overhyped wide receivers coming out, and 2015 was also a strong year for defensive linemen, Phillips slid down to the latter portion of round two, where Mike Tannenbaum smartly snapped him up. If you want better production out of your second round picks, one sure way to do accomplish that is to draft guys in the second round who should have gone in the first, and Jordan Phillips should have gone higher than he did. Think Philadelphia, who drafted USC WR Nelson Agholor with the 20th overall pick two years ago, would like to have Phillips today? How about Cleveland, who selected former Washington DT Danny Shelton with the 12th overall pick? Phillips' production has exceeded that of both players, and he's just getting started. His interception against the Jets last season, in which he hurdled an opposing player who attempted to tackle him, provided a tantalizing glimpse of what he's capable of.

When a player has tremendous athletic ability that doesn't always translate to on-field production, we're often too quick to label that player as an 'underachiever'. The player makes a jaw-dropping play and we wonder aloud why he can't do that all the time. Because those plays are very difficult to make, that's why. Hall of Fame defensive linemen Richard Dent and Bruce Smith, like Phillips, made their share of amazing plays during their respective careers, yet at various times were called underachievers. When a player becomes known for making ridiculous plays, like the one against the Rams at Soldier Field, in which Dent leaped over the running back who stayed in to try and block him, to sack the quarterback, we lament that the player doesn't make those plays more often. But what we, as fans, tend to forget is that no player, not even a Hall of Famer, can make plays like that all the time. Sometimes it takes a while to get those big guys going. Remember Gilbert Brown, a defensive tackle who was drafted by the Vikings but won a Super Bowl with the Packers? I guarantee you that we haven't yet seen the best of Jordan Phillips, and I think you'll see a different, more motivated player this season.