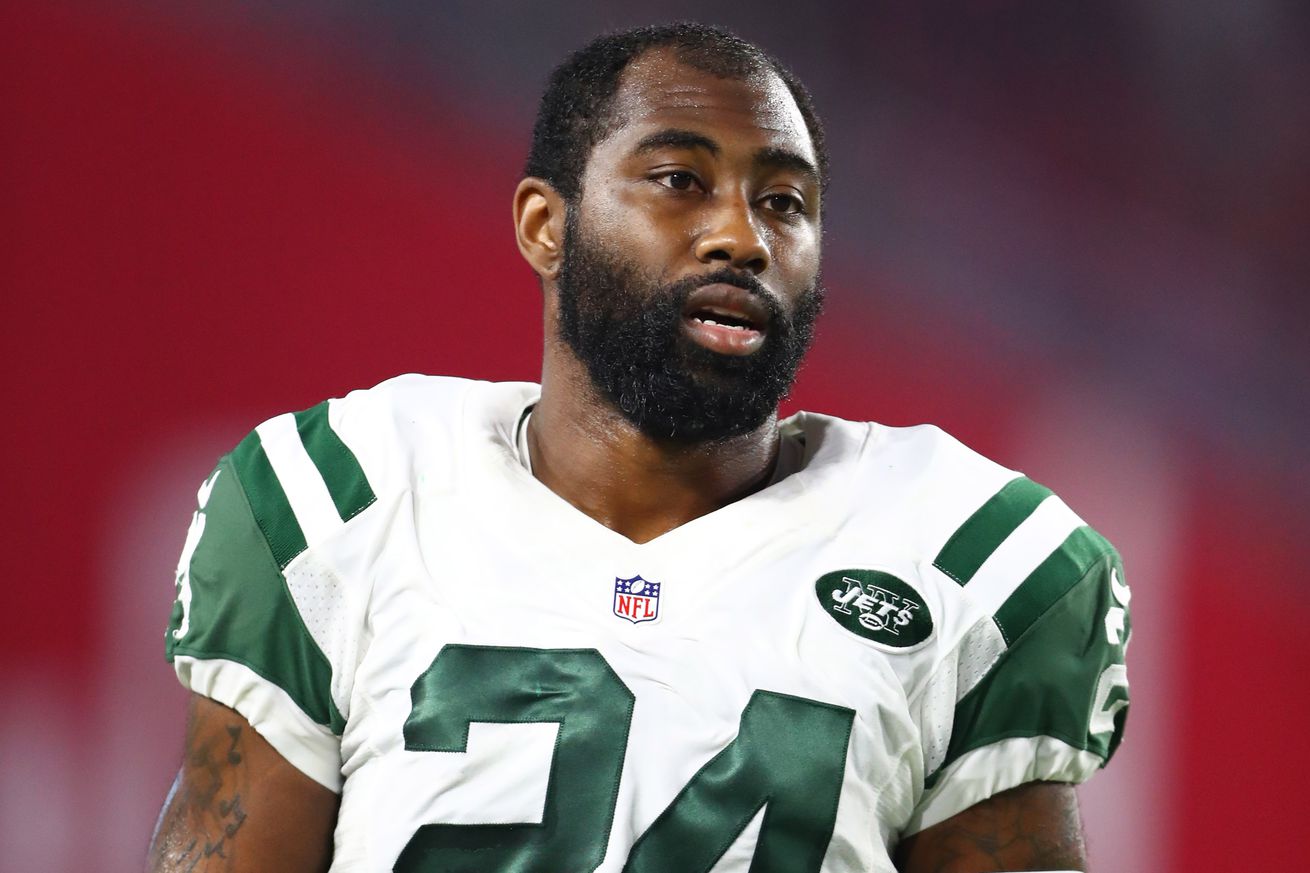 What Miami’s Offense Should Expect On Sunday

Saying that, where the Jets defense excels is in run defense.  They rank #1 in the NFL in rushing defense, allowing 74 yards / game.  It's no secret that Miami's success on offense the last couple of weeks has been their dominant rushing attack.  In those 2 games, Miami has rushed for 478 yards.  Miami's offense is now 7th in the league in rushing averaging 120 yards / game (best running team in the game the last 2 weeks).

Let's start by looking at the run defense of the Jets.  Why are they the best in the league in run defense?  I can basically sum it up in 1 word:  Penetration.  Their defensive line penetrates and causes disruption.  Here is an outside zone stretch play run by the Cleveland Browns last week.  This play is staple of zone blocking teams and of the Miami Dolphins. 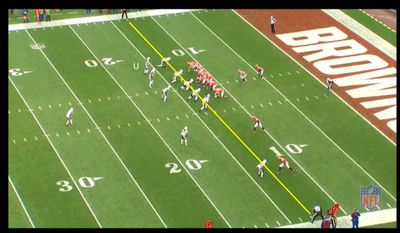 Cleveland is in 12 personnel (2 TE's, 1 RB) with a TE to the right and the 2nd TE in a FB position.  The WR's are twins left.  The Jets are in Cover 1, Man Free, with 8 in the box.  Since this running play is an outside zone stretch play left, I've highlighted the Unblocked Defender.  I've also highlighted the LOS.  In the Zone Blocking Scheme on an Outside Stretch Play, as an OL, you want to maintain the LOS and cut off penetration upfield.  That gives the RB time to pick out the hole and explode through it.  Here is what happens just after the snap. 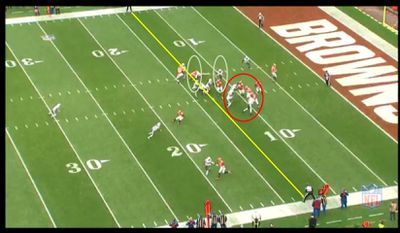 Look at where the blocks are taking place?  The DL has pushed the OL 3 yards back off the LOS.  There is no space for the RB to find a hole because of the DL penetration.  When a RB sees this, he is taught to cut backside.  But he can't because the backside block, highlighted in GRAY, whiffed.  Basically, the Jets DL pushed the OL back at the point of attack and beat the backside blocks.  There is nowhere for the RB to go. 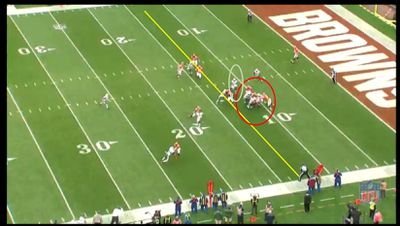 The result is a 2 yard loss.

When watching this game, look at Miami's OL and see if they are getting pushed back in the running game in zone scheme plays.  I would also look for Miami to run some counter action against this defense in the zone scheme.  That has been effective in the last couple of weeks showing outside zone 1 way and pulling the off guard and running the other way.  That uses the defenses penetration against them.

Let's take a trip now to Revis ISLAND.  As I said in the opening of this post, you can pass on the Jets.  In my opinion, a complicated passing attack isn't really what beats this defense.  It's WR's winning individual match-ups because the Jets play a lot of man coverage.  The Jets are in a lot of man coverage because they like to bring pressure and blitz the QB.  So the other key to the passing game is for the QB to stand in the pocket, take a hit, and deliver an accurate pass. 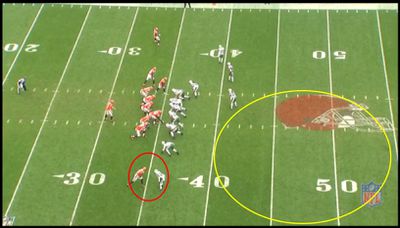 The Cleveland Browns are in an empty backfield with 4 receivers to the top of the formation and 1 receiver to the bottom of the formation.  The Jets, showing blitz, are in Cover 0, man coverage, with all 11 defensive personnel within 6 yards of the LOS.  Darrelle Revis is in man coverage at the bottom of the formation with basically the entire half of the field empty of defense personnel.  That is what we call being on an island defensive.  If the WR can beat Revis in press coverage, it's a big play and potentially a TD because Revis is getting absolutely ZERO help.

Here is what happens just after the snap of the ball ... 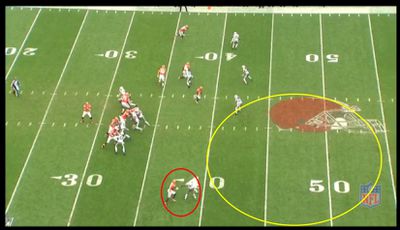 The Browns are running 4 routes with the 4 receivers to the top of the formation to make sure that none of the Jets DB's get to the "open field" that the formation created to keep Revis on his island.  At the bottom of the formation, the WR is running a slant.  Notice the WR stems outside in his route, causing Revis to turn his hips outside, before the in cut for the slant.  Once Revis turns his hips, the WR has won the route. 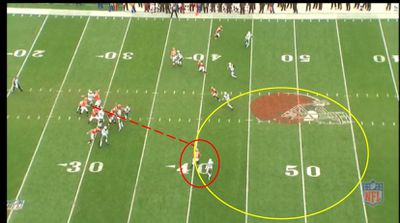 The slant is wide open.  The 4 receiver's routes to the top of the page are all drawing their men away from the ISLAND.  The QB delivers the pass accurately and on time to the WR running the slant.  By all rights, this should be a TD.  If Darrelle Revis were a normal CB, it would be.  Instead, Revis recovers in time to limit this to a 15 yard gain.  This play is a great example of how you can attack this defense by the Jets and also a testament to just how good Revis is playing CB.  I'd bet that this play against 95% of all CB's in the league would result in a TD.  But against Revis, it just a 15 yard gain and because this is Revis at CB, the Jets can run this type of defense and coverage.

The coverage and the WR beating the press by Revis is only 1 part of this play.  The other part is the QB delivering the football against a blitz by the Jets. 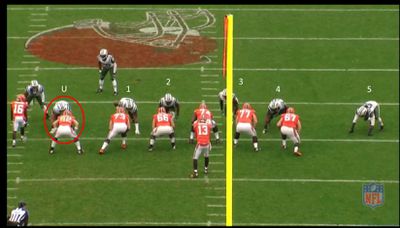 This is the same play, from the OL / QB perspective.  As you can see, the Browns have 5 OL with a TE against 6 possible rushers from the Jets.  From the previous photos in the All 22, we know that the TE goes out on a route.  That means that the Jets can rush 6 defenders against 5 blockers.  There could be an unblocked defender rushing the QB.  And that is exactly what happens. 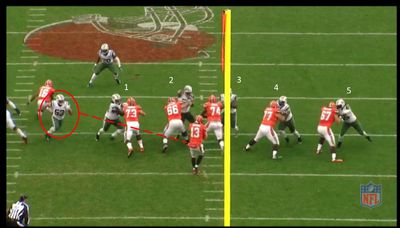 At this point, the QB knows there is an unblocked defender.  The QB knows he is going to get hit.  He also knows he is throwing to the ISLAND because there is so much empty field in that direction.   At this point, the QB is relying on the WR to beat the press man coverage and beat it quickly because he has under 2 seconds before he gets hit.  Again, that is exactly what happens. 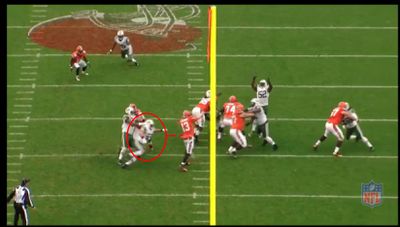 The ball is gone just before contact is made by the unblocked defender.  This is the key to the passing attack against the Jets.  Receivers have to win their individual match-ups quickly against man coverage and the QB has to recognize the blitz and where the pressure is going to come from and deliver the ball quickly and accurately.  If Miami can do that consistently, they will have success against this defense.

These past couple of weeks have been pretty emotional for me.  As most of you know, I'm originally from the Chicago area and a HUGE Chicago Cubs fan.  But my fandom for the Cubs paled in comparison to my Dad's.  When the Die Hard Cubs Fan Club was started, my Dad was an original member, #13 to be exact.  We grew up as kids worshiping the Cubs because my Dad was that big of a fan.  Here is a picture of my brothers and I in 1978 (I'm the big goofy looking kid with the hair helmet on the right). 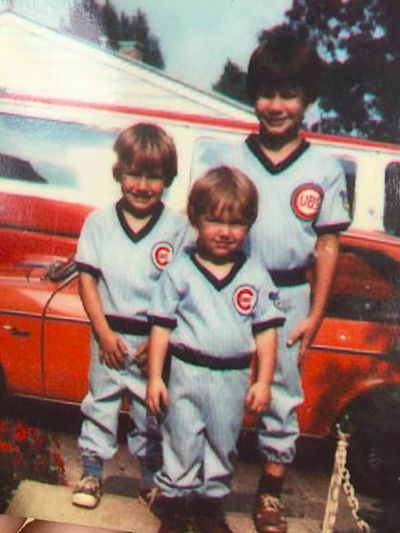 My Dad passed away on Easter of this year.  Prior to his passing, I've never seen him as excited for the Chicago Cubs as he was for this year.  He was giddy with anticipation.  As Cubs fans, we always thought that this year could be the year, and have said that for 108 years, in spring training.  I don't know if we ever truly believed that, but this year, we all kind of did.  This year felt different, and my Dad got that.

So when the Cubs beat the LA Dodgers a couple of weeks ago to go to the World Series, I cried.  My brothers cried.  My mom cried.  We just experienced something that my father, the biggest Cubs fan that we knew, never did.  In his lifetime, he NEVER got to witness this.  And then on Wednesday, when the Cubs won the World Series against the Cleveland Indians, my brothers and I, our families, and my mother were all on a call together to celebrate the win and to cry some more all thinking of Dad.

My Dad didn't want to be buried.  We honored that wish and he was cremated.  He was cremated with the picture above of my brothers and I, with pictures of my mom, his grandkids, our families, and a bunch of others.  He also had his Miami Dolphins Perfect Season Pennant, his Chicago Blackhawks Championship Banner, and his favorite Cubs hat.  I only wish we could have included this as well: 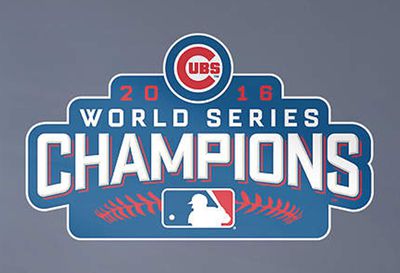 If he could have seen this, I don't think he would have ever have stopped smiling.

I know it is sometimes tough to be a Dolphins fan.  I know it has been a long time since this team has won a Championship (or even appeared in one).  But don't lose faith.  Remember that being a fan is being part of a family and family connects us all.  That is what I've learned, or should say have re-learned, the last couple of weeks.  Plus, if the Cubs can win a Championship, anything is possible.

Sorry for getting a little sentimental.  But, just remember, when fandom of a team gets you down, just "Fly The W", and smile. :) 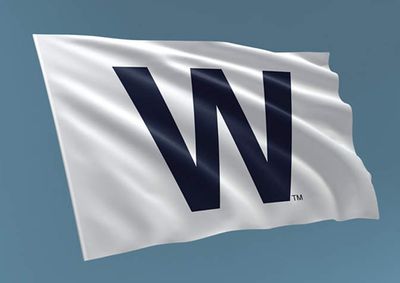