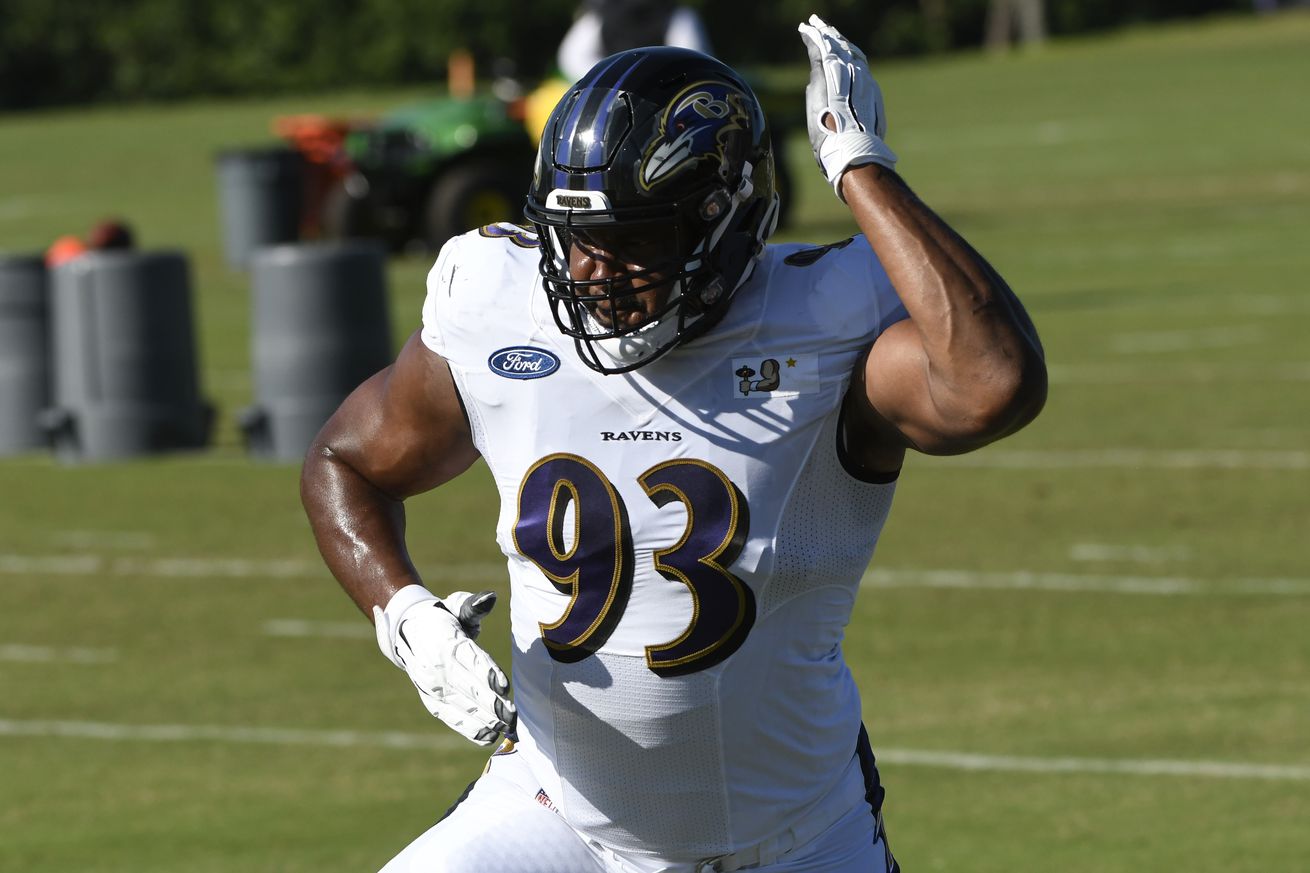 PFF Rankings: Ranking all 32 defenses ahead of NFL Week 6 - PFF
1. BALTIMORE RAVENS. The Ravens have been one of the league’s heaviest blitz proponents and have called one in 2020 on nearly half their pass plays faced at 49.6% — the second-highest rate in the NFL and over 20 percentage points higher than the league average. Their daunting blitz terrorized rookie quarterback Joe Burrow this past week and is one of the biggest reasons why Baltimore had the best EPA per play allowed of Week 5 at -0.46, the best in a single game by an NFL team this season. With the help of Marlon Humphrey shining in the secondary (eighth highest-graded cornerback) and the stout defensive front led by Calais Campbell, this Ravens defense is one of two defenses to rank in the top five in both EPA per rush and pass allowed. [BLG Note: The Eagles’ defense ranks 15th.]

Eagles announce four roster moves ahead of Ravens game - BGN
It’s really hard to understand why the Eagles were in such a rush to bring Curry back. It’s not like they were desperate for more defensive end depth. Activating the 32-year-old veteran ultimately comes at the expense of losing promising 2020 seventh-round pick Casey Toohill to the Washington Football Team. Curry returning also potentially means less playing time for younger guys like Josh Sweat and Genard Avery.

Eye On The Enemy #35: Ravens Preview - BGN Radio
On Episode 35 of Eye on the Enemy, host John Stolnis looks at some of the key match-ups for this weekend’s Eagles-Ravens game at Lincoln Financial Field and explains why he thinks the Birds will WIN this Sunday.

A stadium of 7,500 fans will be waiting for the Baltimore Ravens at Lincoln Financial Field in Philadelphia, PA, as they are set to face off against the Philadelphia Eagles on Sunday. For this reason, I sat down with Managing Editor of Bleeding Green Nation, Brandon Lee Gowton. Check out my answers to Gowton’s questions as well.

Five over/unders for Eagles’ Week 6 matchup vs. Ravens- PhillyVoice
Ravens takeaways: 1.5. The Eagles have had trouble winning the turnover battle this season and it has shown. Giving their opponents a short field has made life hard for the defense with great regularity, as their 2.2 giveaways per game is the worst in the NFL (tied with the Cowboys). The Ravens have impressively forced at least one turnover in 18 straight games and average two per game this year. If they get more than one, chances are they’ll win the turnover fight and have more scoring chances, and that could be the ballgame. It’s hard to see this team protecting the ball against the best defense they will have faced when they haven’t done it before. OVER.

Game Preview – BAL at PHI - Iggles Blitz
Vinny Curry is going to earn his spot in the Eagles Hall of Fame. The Eagles activated him for Sunday’s game with the Ravens and since the team is already deep on the defensive line I assume they are going to move Curry to linebacker or receiver or right guard or cornerback. If he can play well in his new position and jump start the Eagles 2020 season, Eagles immortality will be his. Or the Eagles are a poorly run team and they brought back a 32-year old DE to torture me. I’ll let you decide.

A bewildering roster gaffe and more in Roob’s random Eagles observations - NBCSP
1. Here’s what bothers me about the Eagles losing Casey Toohill: They kept Vinny Curry instead. Now, Curry is one of my favorite Eagles of the last decade. He’s a quality guy and has been a fine Eagle. But why would a team that already has Brandon Graham, Josh Sweat, Derek Barnett and Genard Avery need a 32-year-old Vinny Curry as a fifth DE? Toohill is a rookie seventh-round draft pick who had an impressive training camp, made the 53 and even got 22 snaps in the Rams game. He’s eight years younger than Curry. But with Curry’s IR practice window open, the Eagles released Toohill on Tuesday, trying to sneak him onto the practice squad. Washington claimed him, and now a rookie draft pick is with another NFC East team because the Eagles decided to bring back Curry for a ninth season. Nothing against Curry. He had a good year last year. He’s a pro. But if you’re going to have a youth movement, you just can’t keep a 32-year-old deep backup over a promising 24-year-old rookie draft pick.

NFL Week 6 game picks, schedule guide, fantasy football tips, odds, injuries and more - ESPN
Stat to know: Eagles quarterback Carson Wentz has a 53.1 Total QBR this season (25th in the NFL) and a league-leading nine interceptions. No Eagles QB has led the NFL in picks over a full season since the 1970 merger.

Eagles’ Travis Fulgham out to prove he’s ‘no fluke’ after star turn - PennLive
And that’s where Fulgham believes his 6-foot-2, 215-pound frame and his innate athleticism can make a difference. “I just feel like I’m a playmaker. Whenever the ball is in the air, just go ahead and make the play,” Fulgham said Friday. “Doesn’t matter where the ball is, I have a big catch-radius. Doesn’t matter if it’s one hand or two hands, just come down with the ball.”

Reasons why Cowboys fan should be excited about the rest of the season - Blogging The Boys
Then there is the most delicious and unexpected thing of this season, the collective ineptitude of the rest of the NFC East. While the Cowboys have only managed to muster two wins this year, that is as many as the Giants, Philadelphia Eagles, and Washington Football Team have put up combined. None of them have shown any signs of turning the corner so far, so not only could that offer Dallas an easy path to the postseason, we could have the great pleasure of mocking them the rest of the way. If nothing else, we can always have a laugh over the decision of how Washington chose to address renaming the team by not renaming it at all.

Big Blue View mailbag, 10/17: Dave Gettleman, Matt Peart, trades, more - Big Blue View
I will not advocate for the firing of Joe Judge after this season even if the Giants go 0-16. Winning in the NFL isn’t easy and while everyone is all fired up and saying ‘hey, look at what Matt Rhule is doing in Carolina’ that doesn’t happen for everyone. You have to give a coach — and a front office — time to work together, time to get their program in place, time to get the players they need, all of that. When you have had the worst record in the league for the last three years there is no quick fix. You can’t just keep starting over. At some point, you have to trust the people you hire and give them a full chance to do what you hired them to do.

Derrick Henry is a throwback to when running backs were as important as QBs - SB Nation
Derrick Henry is known for his, let’s say, confrontational running style. While the existence of the power back has slowly slipped away from modern football in favor of the vertical passing game, Henry is a throwback to the days when the starting tail back felt every bit as important as the quarterback. There are still plenty of dynamic running backs around the NFL, but there’s no one else who plays quite like Henry. For one, he’s just massive: standing 6’3 and a double bacon cheeseburger away from 240 pounds, Henry makes the other players at his position look like tiny children. Henry isn’t much of a threat as a receiver out of the backfield. He doesn’t have a 4.3 40-time. While so many of today’s best running backs thrive getting the ball in space, Henry is at his best when he’s creating his own. The Titans star would rather run through defenders than around them.

Want to Study Data Science From the USA? A guide to Choosing the Most Affordable University in the USA