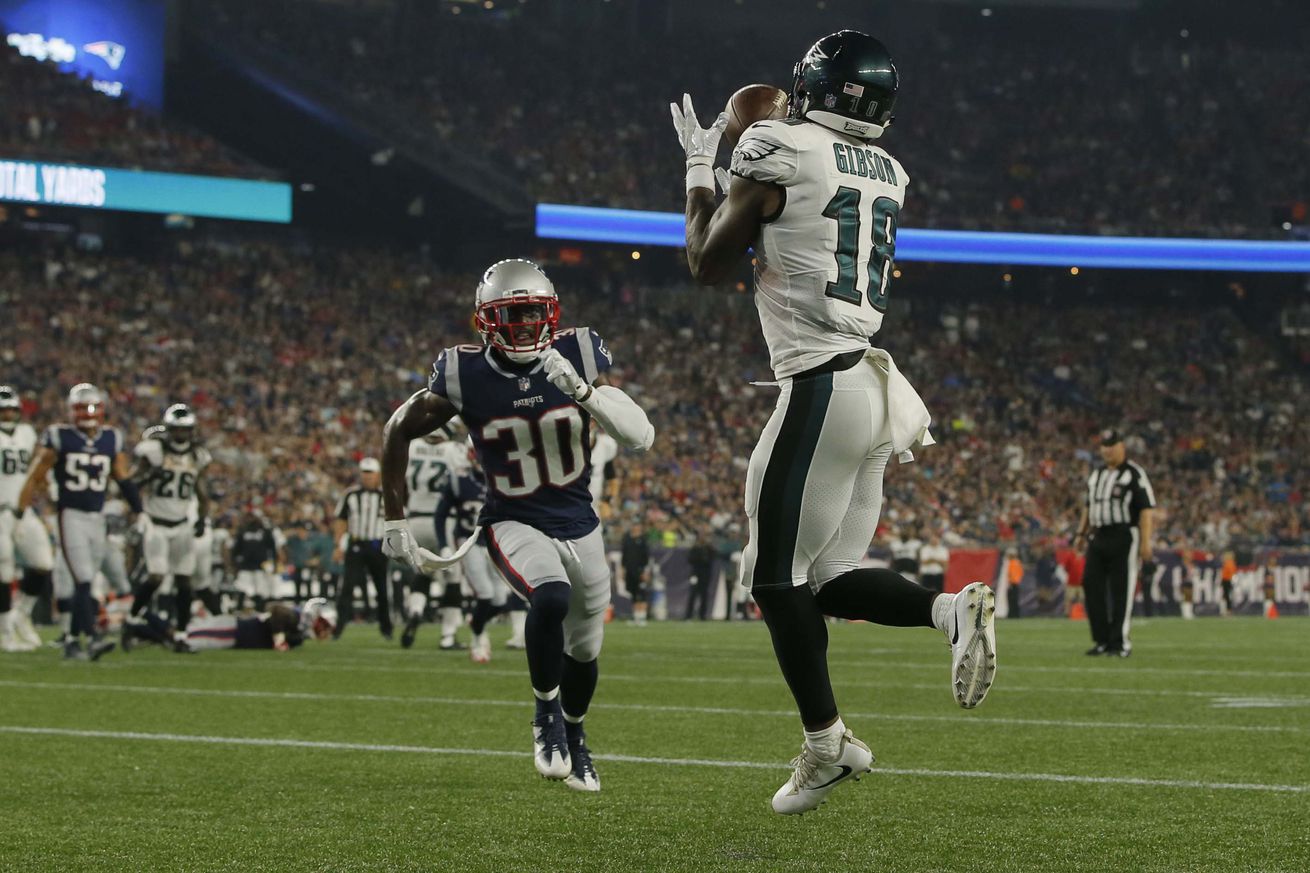 Which players will make the final cut?

Much has been learned about the Philadelphia Eagles’ roster outlook through three weeks of training camp and two preseason games. Now it’s time to take that knowledge and make an updated 53-man roster projection. Let’s see how much things have changed since last week’s prediction. Keep in mind I do one of these predictions every week and I reserve the right to change my opinion at any time in order to make myself look smarter than I really am.

This is a big week for Wentz. He said he’s hoping to return to 11-on-11 in Practice. We’ll see if that’s the case. It sounds like Foles is OK despite getting banged up against the Patriots. It seems like he’ll be ready to play Week 1 if Wentz isn’t cleared in time. Sudfeld has had a good offseason. I think he’s already done enough to earn the No. 2 job behind Wentz in 2019. Joe Callahan might latch on as a third string quarterback (or Practice Squad guy) somewhere else in the league. I think the Eagles want to keep Christian Hackenberg on their practice squad this season and then give him a chance to make the team next year.

Ajayi looks ready to be the Eagles’ “lead” back. Sproles looks spry as ever. Clement has missed some time with an injury but Doug Pederson indicated he’ll be ready for Week 1. The fourth running back spot could come down to Adams or Donnel Pumphrey with Matt Jones and Wendell Smallwood looking so unimpressive against New England. There’s an opportunity for one of those guys to step up and win the job if they can just get back on the field. If not one of them, maybe the Eagles look to add a fourth running back via waivers. Or just keep three with one on the practice squad.

There was some buzz about Jeffery potentially starting the season on the PUP list but that doesn’t seem likely considering Week 1 has always been the target date. Even if he can’t play against the Falcons, he should be ready closer to Week 1 than Week 7. I’ll say he starts the season on the 53. Agholor has been missing time but should be fine. Wallace has had some good practices recently; it’s apparent the 32-year-old veteran is still a legitimate deep threat. Gibson has also proved he can stretch the field. The Eagles might need to find a way to get him some playing time with the kind of preseason he’s had. It’s been a quiet summer for Hollins, who has now been out for a week. At the very least, he figures to contribute on special teams. I’ll go out on a limb and keep DeAndre Carter as a sixth receiver. He’s had some nice moments this summer and he provides depth in the slot. Kamar Aiken could very well be kept as the sixth guy. He wouldn’t be my ideal pick since I’ve seen him struggle but the team might consider him the best special teams player out of the guys competing for a sixth spot. Bryce Treggs is out of the running here after suffering a hamstring injury that’ll likely keep him out for the rest of preseason.

It’ll be interesting to see if the Eagles go with a lot more 12 personnel with Ertz and Goedert in the fold. The second-round tight end looks pretty good, although he’s not without his rookie mistakes. Rodgers has clearly established himself as the Eagles’ third tight end. Hopefully the knee injury he suffered on Thursday evening wasn’t too serious. If Rodgers has to miss time, that could open the door for Josh Perkins or Billy Brown. Brown might have the advantage since Perkins left the game to be evaluated for a head injury. Maybe Brown is purposely injuring his teammates to sneak on to the 53. (Kidding.)

The starting five is obvious. The Eagles will hope that they don’t have to see Big V play much this year because, although he can fill in adequately at times, he can also have some really bad outings. Vaitai really struggled against the Patriots, allowing three sacks and even more pressure. It’s his lack of blocking that got Foles injured. You don’t want to see Wentz getting blindsided in the regular season. I wonder if Pryor would get in at guard over Seumalo. The rookie sixth-round pick has impressed. Check out a clip of him dominating below. Mailata can be stashed away deep on the roster since the Eagles have a number of players who can play tackle over him. The notable absence here is Chance Warmack, who the Eagles should look to trade for at least a conditional seventh-round pick so they can save $1.65 million in cap space.

It remains to be seen if Graham will be ready for Week 1. With his status uncertain, and Bennett getting looks as an interior defensive lineman, it wouldn’t hurt to go heavy at this position. I don’t think Barnett hasn’t been bad but he’s been less noticeable than you’d like to see. Maybe he’ll turn it on in the regular season. Means is too good not to make this roster. The Eagles could trade Means if a good offer comes their way; teams are always desperate for pass rushers. But keeping him would be nice, too. Sweat isn’t likely to make much of an impact in 2018.

Cox is the only player you feel really good about at this position. Vaeao flashed as a pass rusher on one play against the Patriots. Maybe there’s something to the fact he’s not playing through an arm injury like he was last year. Ngata seems like Just A Guy at this point. There was some question as to why I didn’t have Qualls on last week’s roster prediction. I just think he’s struggled. Qualls got outsnapped by Hector, who was recently elevated to second team defensive tackle, on Thursday night. The Eagles could look to add to this position through waivers or a trade.

Nigel Bradham is suspended for Week 1 so he won’t count against the original 53-man roster. That leaves Hicks as the only clear cut starter against the Falcons. Hicks got stiff armed twice against the Patriots, which was frustrating, but he bounced back with some really nice tackles. I remain hopeful he’ll be a nice piece for this defense. Gerry has been getting the first team WILL reps so he looks like the leader in that spot. Grugier-Hill is a lock to make the team, it’s just matter of how often he plays. The team seems to like Reynolds, who brings experience and special teams ability to the table. Walker gives the Eagles more depth behind Hicks. He’s gotten a number of first team defense and first team special teams opportunities so I imagine the Eagles’ 2017 Ed Block Courage Award winner is making the cut. Corey Nelson, who has been so invisible that I originally forgot to mention him here, is on the bubble. I’m keeping him off because by cutting him the Eagles can: 1) save $1 million and 2) potentially get a 2019 seventh-round compensatory pick.

Darby, whom the Eagles considered trading this offseason, had a strong showing against the Patriots. If only he could actually catch the ball. Mills missed Thursday’s game but he doesn’t seem seriously injured. Jones was up and down against New England. The fact that he hasn’t totally seized the first team nickel corner job at this point is at least a little disappointing. It seemed like Maddox wasn’t in line for ton of playing time this year but now he’s a contender for seeing snaps in the slot. Douglas gives the Eagles depth on the outside and the outside only. Bausby once looked like a lock to make this team; I’m not so sure he is now. The 25-year-old has had some struggles. I’ll keep him on for now. D.J. Killings makes the practice squad.

The top three players at this position are set. I’m not as sure about Sullivan’s spot considering he’s had some bad whiffs in preseason games. With Stephen Roberts getting hurt, that’s one less threat to worry about. Maybe Jeremy Reaves can step up and steal Sullivan’s job but for now I’ll still keep the Shepherd University product ahead.

Elliott has had a strong offseason overall but he missed four (indoor) field goal attempts during practice and one extra point attempt during a game in the past week.

Johnston had a good day of practice where he was pinning punts down in the 20-yard line. He punted well against the Patriots, too.

Lovato was recently helping some of his teammates learn how to emergency snap.

Nigel Bradham is suspended for Week 1 so he won’t count against the 53-man roster until leading up to Week 2.

It seems very likely that Timmy Jernigan will begin the season on the non-football injury (NFI) list. That means he’ll miss six games, at least.

The Eagles could keep Chris Maragos on the physically unable to perform (PUP) list to start the year. That would mean he’ll miss at least six games as well.