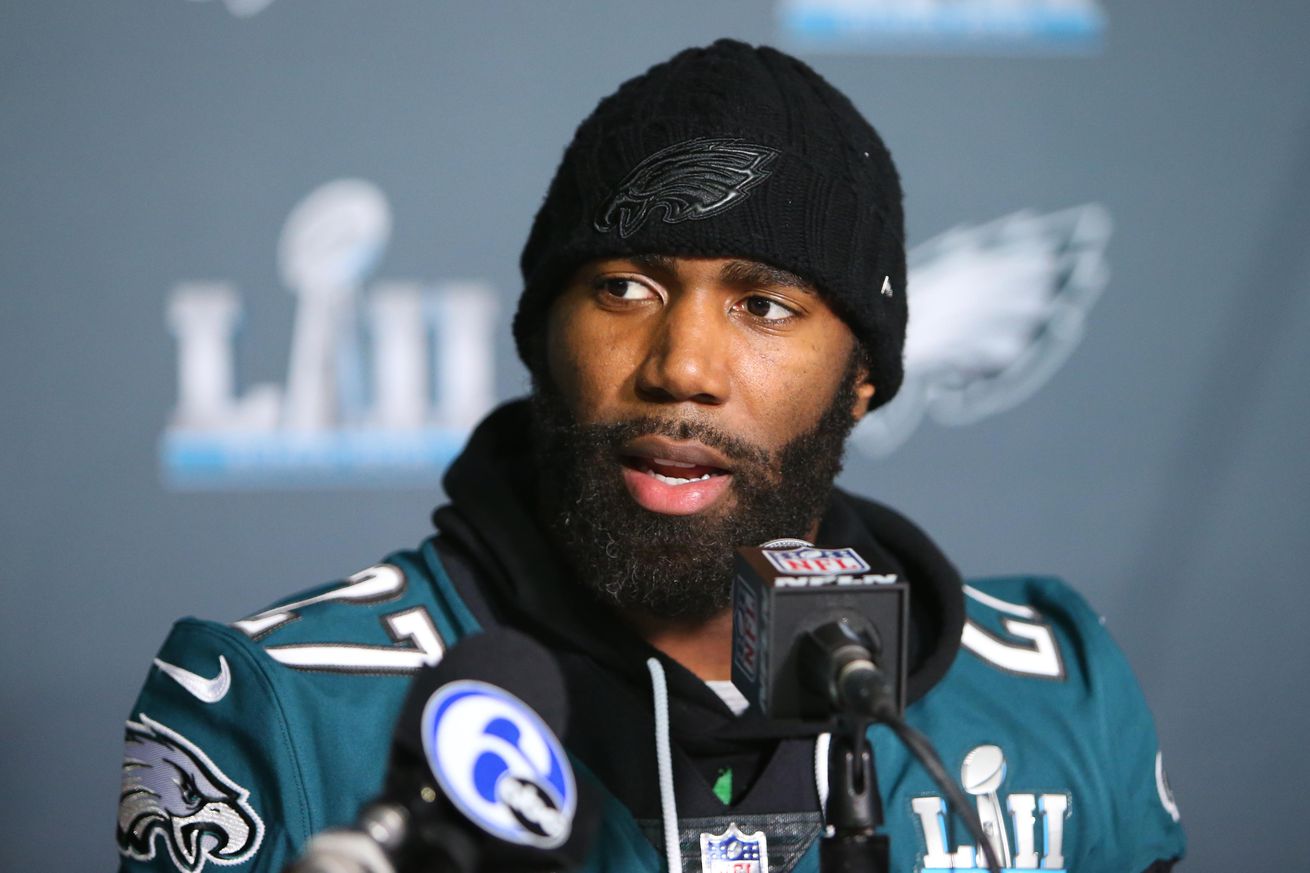 Philadelphia Eagles news and links for 2/10/18.

Malcolm Jenkins, Chris Long, Torrey Smith among Eagles who will turn down White House invitation - ESPN
Safety Malcolm Jenkins, defensive end Chris Long and wide receiver Torrey Smith are among the Super Bowl champion Philadelphia Eagles who will decline an invitation to the White House if President Donald Trump offers one. ”Going to the White House should be seen as an honor, and I believe it is an honor, but to me it has to be an honor with the right type of respect in office. I just don’t see it,” Smith said. ”It’s not about politics; I just don’t think the president is a good person. I don’t want to go out of my way to go see someone who isn’t even welcoming the men in this locker room and our different cultures.”

Philadelphia Eagles 2018 Offseason Preview: A Crash Course - BGN
The Birds are Super Bowl Champions. In case you forgot. The week has been nothing short of magical. From the game itself and all of its twists and turns to the post-game interviews/celebrations and of course, the parade. I’ve spent my entire life dreaming of a Philadelphia Super Bowl—even the wildest of fantasies couldn’t hold a candle to this. But the wheel of time spins on, ignorant of success and failures. For 31 teams, turning to the offseason is an opportunity—for Philadelphia, it’s regrettably an unavoidable responsibility. As such, take your time—enjoy the revels and spoils of victory for as long as you like. Once you’re ready to turn to the Draft, free agency, and beyond, come on back and get updated on the Eagles’ 2018 offseason situation here.

Counterpoint Ep 26: It’s time to Talk that Ish - BGN Radio
Jack Fritz is back to tell you... it’s time to talk some shit on everyone with this new shiny thing that they call the Lombardi trophy that just happens to be in the city of Philadelphia. Plus, did the media bury the lead on the Carson engagement? All that and the mailbag on this Super Bowl edition of Counterpoint.

How Jason Kelce wound up wearing a Mummers costume at Eagles Super Bowl parade - PhillyVoice
So how did Kelce wind up wearing the outfit, which belongs to the Avalon String Band? As it turns out, it’s not overly complicated. Kelce knows someone who knows someone – not in the way most professional athletes “know somebody,” but the way everyone from Philly knows someone who knows someone who can get them something. For Kelce, that person was his longtime hairdresser, Liddy Coyle, who has been cutting the Eagles lineman’s hair since he was drafted by the Eagles in the sixth round back in 2011. And the person she knew was, well, her husband Bobby, who also happens to be the string band’s business manager.

Stage 5: A Parade To Remember Forever - PE.com
The remnants of the greatest day ever remain in the streets of Philadelphia, or, if you were there, in your clothes, up your nostrils, under your fingernails, like grains of sand after a day at the beach. They will never go away. And who would want them to, anyway? The Eagles’ Parade Of Champions from Thursday resonates like no day in the history of the City of Philadelphia ...

“Philly Special” Both Defined Super Bowl LII and Issued a Lesson in the Art of the Trick Play - The Ringer
The Eagles and Patriots ran versions of the same wide receiver pass on Sunday. One worked; one ended in a Tom Brady drop. Why is this play so popular? And what does the difference between the teams’ success and failure reveal about the nature of football trickery?

Film Review: How the Eagles’ Three Wide Receiver Sets Dominated Super Bowl LII - Pats Pulpit
We are now almost a week removed from the Patriots’ disappointing loss to the Eagles in Super Bowl LII, and yet it’s still difficult to wrap your head around what we just saw. That’s because what we saw, an Eagles’ offensive outburst for 41 points and 538 yards, was unprecedented for a Bill Belichick coached defense. Arguably the greatest defensive mind in the history of the NFL surrendered the most yards and the second-most points in a game in his historic career as the Patriots head coach in the biggest football game of them all. What made Super Bowl LII so mind-numbing, besides the final score, was that the Eagles beat the Patriots because New England’s defense was predictable.

John DeFilippo meets the Twin Cities media - Daily Norseman
After his hiring on Thursday night, new Minnesota Vikings’ Offensive Coordinator John DeFilippo got his first opportunity to spar with the Twin Cities media as a member of the organization. Thanks to the Vikings’ PR staff, we have a transcript of the entire Q&A session, but there were a couple of questions that I wanted to point to in particular from today’s presser.

How last year’s 7-9 Eagles carved a Super Bowl path - NBC Sports Philadelphia
On ESPN’s SportsCenter Friday morning, still buzzing from the Eagles’ Super Bowl parade, safety and veteran leader Malcolm Jenkins talked about the importance of that 2016 season. ”Well I think what we learned was in Year 1 what we had done, even though we didn’t get the results that we wanted as a team, we felt like we laid down the foundation for something epic,” Jenkins said. “So coming into this year we started adding guys in, we were plugging them into a culture that had already been laid out and everybody grasped that. And Doug is the one that set that culture. ”So here we are Super Bowl champions two years after he’s arrived and it’s on purpose. We didn’t just show up this year and be good. Last year we took the time to do the things right and really go into the culture Doug Pederson wanted to lay and it’s been awesome.” Jenkins is a big reason for the culture too. His speech to the team after Carson Wentz went down on Dec. 10 was huge. After Pederson would speak to the team this year following games, it became customary for Jenkins to do the same.

NFL1000: Ranking the Top Defensive Tackles of 2017 Season - B/R
Fletcher Cox has a large 6’4”, 310-pound frame with an athletic, lean, well-rounded build. He’s also an elite athlete with long arms and tremendous mobility in his ankles and hips. Those allow him to flatten and corner in tight spaces. Cox shows the hand placement, leverage and elite play strength to hold his ground versus combo blocks and has the ability to cross-face and two-gap single blocks. He’s is a devastating pass-rusher with incredible talent to convert speed to power and keep offensive lines off balance. He can open offensive linemen’s hips and rip to win the corner with elite closing speed to finish at the QB or transition to power and cave in the pocket before blockers can anchor. He sets up his moves with extraordinary nuance and fluidity. Cox also shows advanced hand usage and power to clear opponents’ hands and penetrate the pocket.

PFF NFL QB superlatives for the 2017 season - PFF
Before his season-ending injury, Wentz was incredibly efficient on third down, leading the league in both passer rating (123.7) and PFF grade. When the situation became more difficult, Wentz was just as good, as he dominated third-and-longs and led the league with a passer rating of 122.2. Wentz’s knack for moving the chains on key downs had the Eagles looking like the Super Bowl favorites prior to his injury.

A day after Eagles Super Bowl parade, Jason Kelce and ‘Philly Dilly’ tattoos are in demand - Philly.com
Adam Elliott is planning on tattooing Jason Kelce’s face onto a man’s body Saturday. The client wants a permanent caricature of the Eagles offensive lineman eating breakfast — pork roll and scrapple, obviously — as an homage to part of Kelce’s epic, profane tirade that was the undisputed highlight of Thursday’s Eagles Super Bowl victory parade. Elliott, a 43-year-old tattoo artist and the owner of Passion & Pride Tattoo in Cheltenham, has been buried in requests for Eagles-related tattoos since the Super Bowl. He’s tattooed portraits of MVP Nick Foles, the Lombardi Trophy, the “Philly Special” play design and, since Thursday, he’s had “like 14” inquiries about getting some sort of Kelce-related tat.

Brandon Graham’s big play resonates at Detroit’s East English Village - The Athletic
“He’s kind of our unofficial sponsor,” Oden said. “When we need something in a pinch, or we need something, he always comes through. He’s bought our uniforms twice. He’s committed to doing it every three years. … He’s done cleats — most recently, last season, he did our helmets. He saw that we had a reconditioning need in our helmets, so he purchased 60 new Xenith helmets. “Xenith is also a local company here in Detroit, so he spent the money right here in the city.” Oden, who estimated Graham comes back about five times per year, called Graham a “jewel” and “one of the pillars of our community.” That connection best explains the reaction around East English Village after the Super Bowl and Graham’s decisive role in it, even nearly 600 miles from Philadelphia. “Seeing somebody from Detroit doing all (those) things, it was exciting and gave me confidence and motivation to do it too,” said Zhamaine March, a student and football player at East English Village.

Brandon Graham made more than one play to help the Eagles win the Super Bowl - SB Nation
Even if you didn’t watch it live you have seen the play by now. New England had the ball down five points to Philadelphia with just over two minutes left to play in the Super Bowl. Far from a precarious predicament, we have come to expect Tom Brady to thrive in these situations. Most fans were probably on the edge of their seat in anticipation of yet another fantastic finish from the Patriots’ star quarterback. Then, in the blink of an eye, Eagles defensive end Brandon Graham replaced Brady’s storybook ending with one of his own. You probably didn’t even hear Graham’s name much in the lead up to the big game even though he just had the best regular season of his eight-year career with 9.5 sacks. With that one play, however, he ensured that everybody would be talking about him afterwards. But before I get into Graham’s sack and caused fumble that all but sealed the win, I want to point out some other big plays he made on Sunday that kind of flew under the radar during the broadcast. Graham was already having one hell of an impactful game before that play, and it’s about damn time that he gets his just due.