Eagles News: Jim Schwartz’s defense named one of the best schemes in the NFL 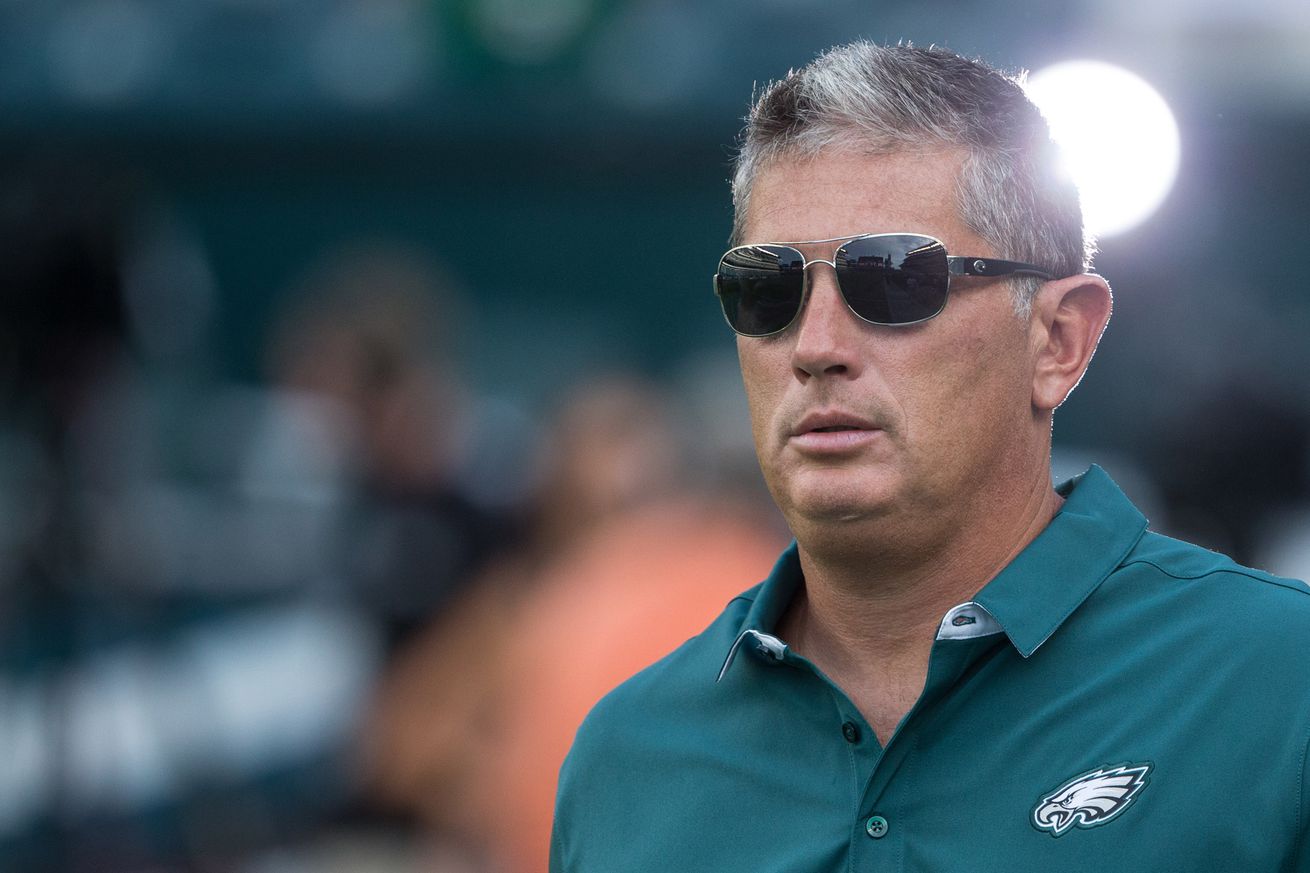 Philadelphia Eagles news and links for 7/8/17.

NFL1000: Ranking the Best Defensive Schemes - B/R
When former Detroit Lions head coach Jim Schwartz took over the Bills’ defensive coordinator position in 2014, Buffalo’s defense went from 20th in points allowed the year before to fourth in Schwartz’s one season there. And when the Eagles hired him to replace Bill Davis as their defensive coordinator in 2016, that defense progressed from 28th in points allowed to 12th. Schwartz obviously has effective schemes for his entire defensive roster, but the one thing he’s best known for is the "wide nine" attack front that puts his defensive ends slanted at an angle far outside the tackles (in the nine-gap, hence the name), allowing them to take after the offensive tackles in different ways. It was a staple during his time in Detroit, and Schwartz took it with him to Buffalo and Philadelphia.

Malcolm Jenkins: Colin Kaepernick’s message will live on despite apparent blackball - PhillyVoice
“I actually enjoy that,’’ Jenkins said late last month while running his sixth annual Next Level Youth Football Camp at Piscataway High School. “You can try and paint me into a box, but the minute I talk to you it’s hard to deny my stance, my way of thinking. And that’s what everybody has to look forward to, that opportunity, to at least show who they are before you’re pre-judged. When people pre-judge me, and then talk to me and leave the conversation feeling different, it shows them a little bit of their flaws. And sometimes I have to have that same realization. I have to tell myself, ‘Hear him out first,’ because you can’t pre-judge somebody just because they don’t agree with you. I think that’s a healthy way to move forward and address things.’’

Blount Force - Iggles Blitz
The NFL Network recently showed a couple of Patriots games. I was casually watching the first and took notice of LeGarrette Blount. I started trying to imagine what the Eagles run game might look like with Blount as the feature runner. Let’s start by comparing Blount to Ryan Mathews. Blount is bigger at 245 pounds (an estimate), but he and Mathews are both tough, physical runners. Mathews has better burst and is faster. He’s also a better receiver. Blount has better feet and does a better job of reading blocks. He’s unusual for a big runner because he is patient, letting his blockers do their job. He is still is aggressive, but knows how to pause momentarily to let a hole develop.

NFC East Q&A: Is the Giants' receiving corps best in the NFL? - ESPN
I’m a fan of Atlanta’s corps of Jones, Sanu and Gabriel, and have respect for the receivers in Oakland, Pittsburgh and Tampa Bay as well, but the Giants' receivers absolutely deserve to be in the conversation. It’s difficult to envision how the Eagles' secondary will handle this group. Jalen Mills on Beckham? Patrick Robinson on Marshall? Ron Brooks, coming off a ruptured quad tendon, trying to keep up with Shepard in the slot? Could be trouble. More times than not, the Giants will enter a game holding a matchup advantage in that department, which is a beautiful thing to have going for you. Marshall is coming off a down year (788 yards, 3 TDs in 15 games). I’m curious to see whether at age 33, he can still reach lofty heights. That’s the X factor for me. If he can be the type of imposing presence we’ve become accustomed to, this just might be the best receiving corps in the NFL.

All 3 Eagles cornerback positions are up for grabs - CSN Philly
Undlin said in a recent interview both outside cornerback spots and the slot are all up for grabs going into camp. “It’s just going to be who’s going to step up here in training camp and through the preseason," Undlin said. "Who’s going to say, 'Listen, I’m starting here, I’m starting here, I’m going to play the nickel,' and then here’s the backups. "I like them all right now and we’ll find out how it goes down, and that’s what this whole [offseason] is for, to find out who’s going to rise to the top and who’s going to earn a spot and take it and then hopefully can keep it. We’ll see how that goes."

Top 5: Jordan Hicks - PE.com
Let's take a quick look back at some of the biggest plays from Jordan Hicks in 2016.

'I've seen fights in the stands': Nolan Carroll says Eagles-Cowboys is NFC East's top rivalry - PennLive
"Philly and Dallas is the biggest rivalry," Carroll said during an appearance last month on Sports Den, a show based out Jacksonville, Florida. "I mean, I've seen fights in the stands numerous times. And I've been there for three years, I think I've seen about six fights, and they've all been Dallas vs. Philly games."

For Cowboys, winning still trumps character - PFT
And for Jerry Jones, who remains intent on winning a Super Bowl with a team that he can claim full credit for building, the desire to win continues to trump concepts like character. It’s true for many teams, in every level of every sport. It’s especially true in Dallas, where Jones has shown a willingness to tolerate great players who may not be model citizens.

Panthers secretly tweeted the 'Fresh Prince of Bel-Air' theme song over the course of three days - SB Nation
The Carolina Panthers and their Twitter account have really outdone themselves with this one.

Eagles News: Jim Schwartz’s defense named one of the best schemes in the NFL