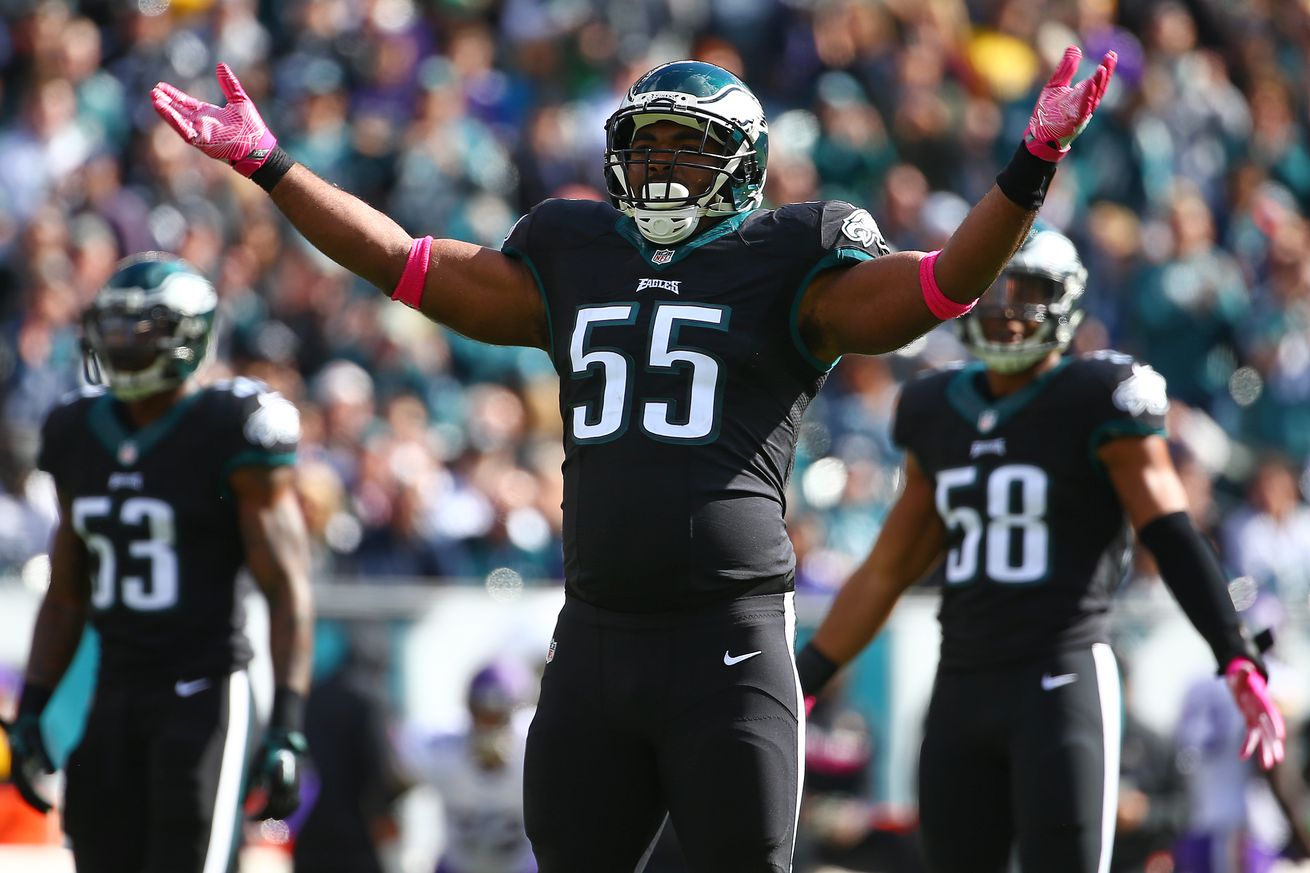 Can you guess who made the cut?

Pro Football Focus recently revealed their list of the top 101 players from the 2016 NFL season. Five Philadelphia Eagles players made the final cut this time around, which is three more than last year’s total.

Brandon Graham generates as much pressure as any other pass-rusher in football, but will never get the credit for it he deserves because he just doesn’t finish well enough and convert enough of those pressures into sacks. Graham hurried the opposing QB this season 83 times, more than every player not named Khalil Mack. However, he only got home six times to finish the play then and there. Pressure in and of itself, though, is impactful — and hugely beneficial to a defense. In Week 8 against Dallas, Graham didn’t notch a sack, but he pressured rookie quarterback Dak Prescott 11 times, and was a huge reason for Prescott’s worst game of the year at that point. Graham can still improve on his finishing, but even if he doesn’t, we need to appreciate the impact he already has and not focus on the area of improvement when evaluating his play — because that way is losing sight of the forest for the trees. Best performance: Week 16 vs. Giants, 93.5 grade. Key stat: Graham ended the season with 17 knockdowns, third-most in the league, to go along with 83 total pressures (second-most).

PFF has long been a fan of Graham; he always grades out well by their formula. There’s an argument ninth is too high, but there’s no question Graham had a strong year. He was one of the few players who really showed up every week.

Graham would get more national attention if he could turn a few more of his hurries into sacks. Perhaps an improved secondary would give Graham more time to bring down opposing passers.

After checking in at No. 28 last season, Cox dropped down 27 spots this year. Cox graded out as PFF’s fifth best interior defensive lineman from 2016.

The move to defensive tackle in a more aggressive one-gap defensive scheme in Philadelphia didn’t quite turn Fletcher Cox into the monster many expected it to, but he had another excellent season in the new scheme, and was an unblockable force at times in the season. The only player to give Cowboys G Zack Martin trouble, Cox racked up 57 total QB pressures over the season, despite seeing his playing time cut down to 75.5 percent of the team’s defensive snaps. Best performance: Week 17 vs. Cowboys, 85.7 grade. Key stat: Cox notched eight total QB pressures in two games against the Dallas Cowboys and All-Pro guard Zack Martin.

As PFF notes, Cox wasn’t as dominant as some expected him to be in his first year back as a 4-3 defensive tackle. He still had a pretty good season, but he didn’t play up to his massive contract extension.

‘Franchise’ is the highest ranked Eagles offensive player. He graded out as PFF’s eighth best offensive tackle in 2016.

Jason Peters was one of the league’s best pass blocking tackles this season, though his run blocking was more inconsistent, and not quite as dominant as previous years. As a pass blocker he allowed 25 total pressures over the season and had three perfect games in that area. Allowed more than one total pressure just six times over the season, but was penalized a dozen times. Best performance: Week 17 vs. Cowboys, 90.7 grades. Key stat: Peters recorded a pass-blocking efficiency score of 97.0, fourth-best among offensive tackles.

2016 was a bounce back season for Peters at age 34. The Eagles still want to keep him around but the team reportedly wants him to take a pay cut. As the 11th highest salaried tackle, it’s hard to argue Peters is overpaid. Maybe the two sides can agree on a restructured deal instead.

Brandon Brooks was one of the most successful free-agent signings of the previous offseason, and had a fine debut season in Philadelphia, narrowly missing out on a spot on PFF’s All-Pro team. Brooks allowed only one sack all season, was flagged three times and earned one of the league’s better run-blocking grades, showing off a complete game that saw him rank as one of the league’s best guards. Best performance: Week 17 vs. Cowboys, 83.9 grade. Key stat: Brooks allowed one sack and two hits on the QB all season.

So far, so good for the Brandon Brooks signing. The Eagles badly needed a new starting guard last offseason and they got a good one. Brooks turns 28 in April so he figures to be a nice piece up front for the considerable future. The fact that he’s really embraced the Philly culture is a nice bonus. For his sake, here’s hoping his anxiety issues don’t continue to be a big problem for him.

Hicks is tied with Sean Lee as the fifth highest graded linebacker from 2016.

The performance of Eagles LB Jordan Hicks in coverage this season was sensational. The average NFL linebacker gives up a passer rating of 104.0 when targeted in coverage, but Hicks allowed a rating of just 53.7, more than 50.0 points better than average. He gave up just one touchdown all season, while picking off five passes and breaking up another three. Best performance: Week 8 vs. Cowboys, 89.4 grade. Key stat: Hicks allowed a passer rating of 53.7 when targeted in coverage, compared to the NFL average for LBs of 104.0.

The feeling here is Hicks is one of the most underrated young players in the league. Eagles fans obviously appreciate him but he hasn’t caught on nationally in a big way yet. That needs to change in the future. Hicks is a really special kid.

Jordan Hicks led all NFL linebackers in interceptions this season with five. #Eagles

Jordan Hicks is a beast.

There’s just so much to like about Hicks. His growing reputation as a Cowboys killer is fantastic. In four games against Dallas, Hicks has 21 tackles, four interceptions, one forced fumble, one sack, and one touchdown. He also knocked out Tony Romo for most of the 2015 season.

No former Eagles made the list this year. No, not even Sam Bradford.

This post first appeared on Bleeding Green Nation, A Philadelphia Eagles Commu, please read the originial post: here
People also like
A Guide To Visiting Antigua, Guatemala: The Best 5 Things To Do And See
Useful Tips for Building a Stronger Company Culture
Security Footage Shows DaBaby Shooting & Killing Man At Walmart In 2018, Despite Self-Defense Claims!
iHerb – 38% off LactoBif Probiotics
The Best Romantic Honeymoon Destinations in the United States
Do brain waves of a dying person show we’re in Heaven?