The Eagles lost to Washington, 27-22, in the worst dang way 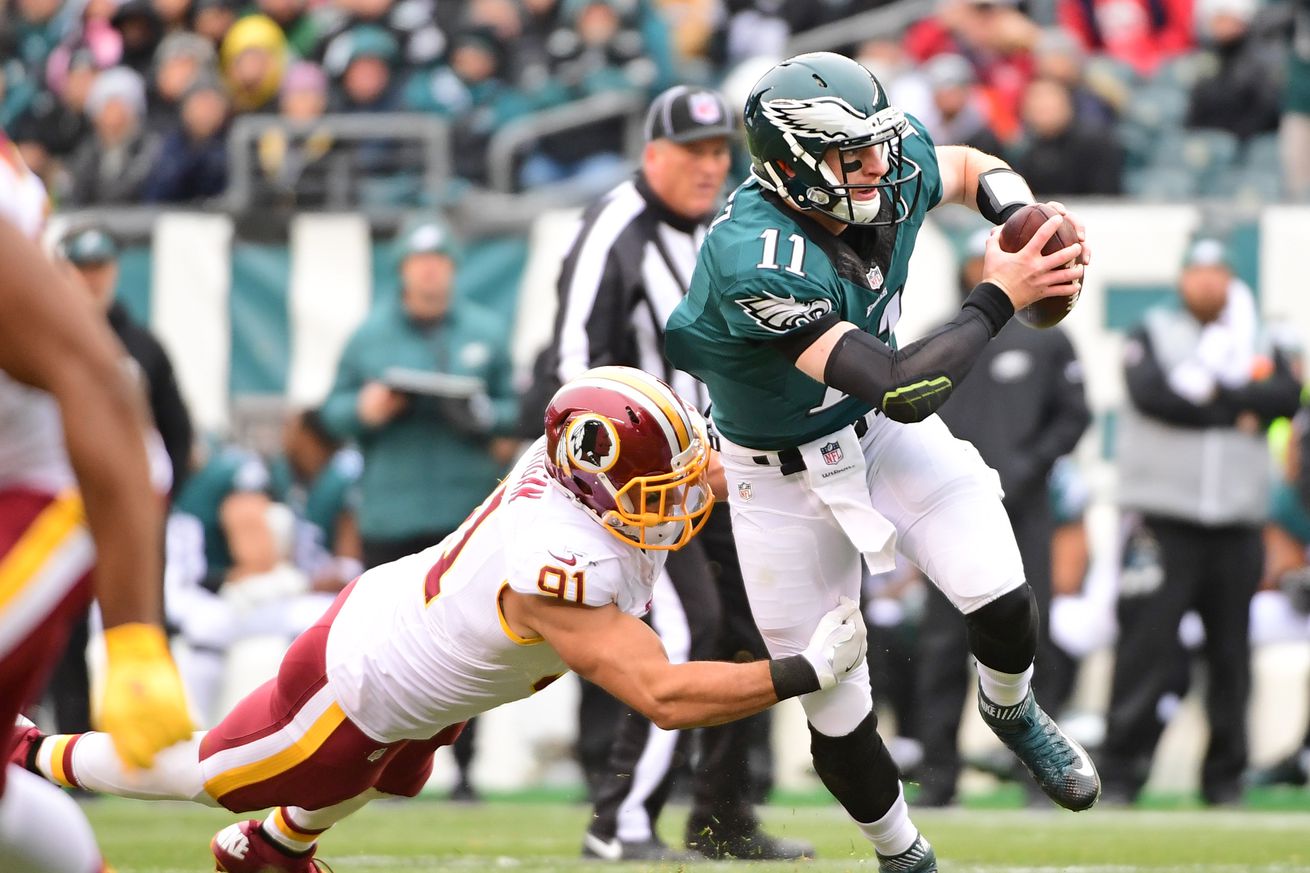 Connor Barwin, helmet off, bounced in a rage. Steven Means was held back by multiple teammates. Shoves were exchanged. 15 yards away, Darren Sproles lay on his back with trainers surrounding him.

It was moments after a punt gone wrong. Washington safety Deshazor Everett launched his body, head acting as a spear, at the returner Sproles, whose head was raised to the skies, waiting for the football. Everett arrived first. He collided with Sproles’ helmet. Sproles rolled over in pain and grabbed at his face mask.

Sproles remained on the ground for a handful of minutes before leaving the field.

It looked, for a glimpse, like the Eagles were going to win it for Sproles.

On the ensuing drive, which despite only going 37 yards ate up over six minutes of game clock, the Eagles kicked a field goal with Trey Burton as the dang long snapper (yea, we know) to take a 22-21 lead over Washington with five minutes to play.

Then it was the defense’s turn, and unfortunately the defense couldn’t hold up under the pressure. Washington drove down the field, thanks in part to a missed delay of game penalty and in part to a number of plays made by Kirk Cousins. A touchdown was scored with less than two minutes to play.

Wentz drove the Eagles all the way down inside the red zone before getting sacked and fumbling the ball away with 12 seconds to play.

What began with encouraging signs of a team determined to reverse its course over the final four weeks of the season turned into another dance of “been there, seen that” as the Eagles fell to Washington, 27-22, on Sunday.

The Eagles are now 5-8 after starting the season 3-0; they’ve lost four games in a row, and six of their last seven.

It started well, at least.

… But again the Eagles were unable to convert a drive into seven points, and they settled for Sturgis’s second field goal of the game, taking a 6-0 lead.

Instead of enjoying a double-digit lead, the Eagles left the door wide open for Washington to sneak back in and take control of the game.

Which, on the very next drive, Washington did. Kirk Cousins led the offense 69 yards in 10 plays and just over six minutes, capping the drive off with a 22-yard touchdown run.

Still, it was close and competitive. The Eagles answered just before halftime with an excellent touchdown pass to Darren Sproles as Wentz led a three-and-a-half minute drive to close out the second quarter and give the Eagles a 13-7 lead at the break.

Then… Washington did some things.

You remember that DeSean Jackson guy? He used to play for the Eagles. He was very good. He is still fast. He ran a whole lot of yards, caught a pass, and then ran some more yards — 80 yards in total — for six points. After a fruitless drive from the Birds, ending in this botched snap from Brent Celek, Washington went 54 more yards and scored another touchdown to take an eight-point lead at the end of the third quarter.

Even with a pick-six from Leodis McKelvin, which narrowed the gap to two points with 13 minutes to play, and a one-point advantage late in the fourth quarter, the Eagles couldn’t make it work.

Sunday’s game, effectively, was a microcosm of the team’s season. Hampered by injuries and an absence of true playmakers, a hot start went for naught and, as the defense wilted with time, the Eagles were shown once again to be pretenders.

The Eagles lost to Washington, 27-22, in the worst dang way