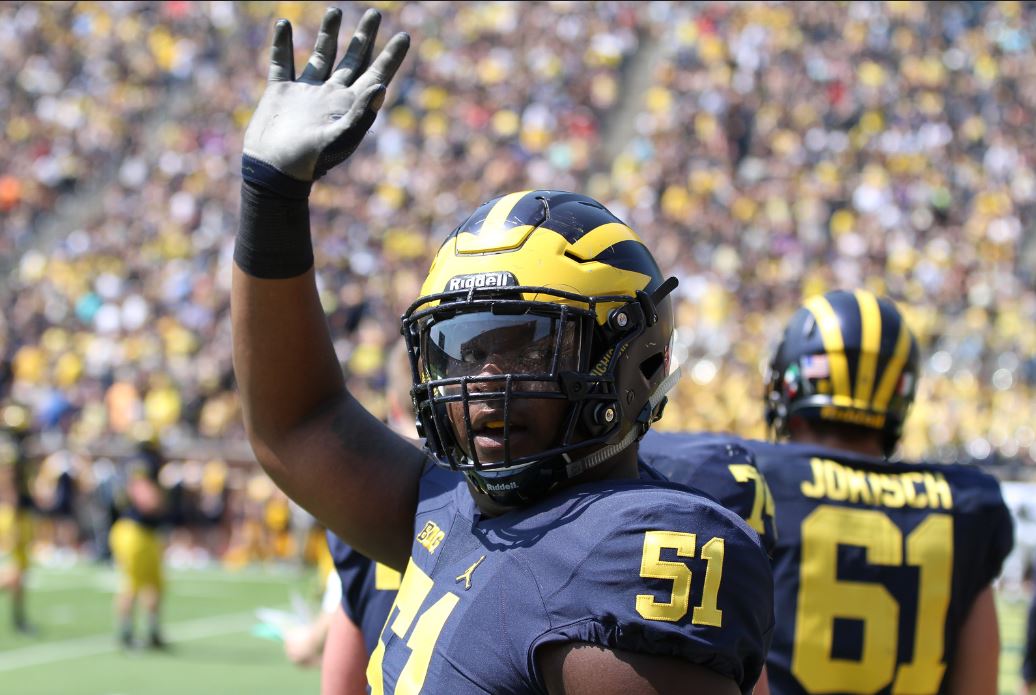 We knew this day would come. [Eric Upchurch]

As expected/hinted at/hoped against all year, Michigan's star center announced he's leaving early for the NFL

All Glory To The Most High LOVE pic.twitter.com/DG0S3bVI51

Ruiz came to Michigan as the rarest of prospects: a five-star center who'd actually played center in high school. Cesar pipped Michael Onwenu at right guard late in 2017 and took over at center the last two season, over which time Michigan's previously manifest interior pass protection issues suddenly disappeared. How much of that was Warinner and growth from Bredeson/Onwenu, and how much was due to the preparation and line calls of Ruiz is impossible to tell from film. Also impossible to tell: how much of Ruiz's tendency to move too quickly to the linebacker level was Michigan's scheme versus Ruiz's decision-making.

That tendency is probably why Ruiz didn't become the Rimington finalist we projected him to be this season. His strong film against Alabama's Raekwon Davis, Michigan State's Raequan Williams, Penn State's Robert Windsor, and Ohio State's hoard of hellbeasts should be enough to ensure at least a 3rd round pick, while his natural athleticism could see him leap to the 1st, where some analysts already have him. I don't know how the Colts are fixed for centers these days but the Indiana and Notre Dame games from this year will stick out as Ruiz's most dominant performances.

It does make the decision of former backup C Stephen Spanellis to grad transfer this offseason more of a blow. To that: bowl practice observers reported redshirting freshman Zach Carpenter was taking second-team snaps last month. Combine that with a bunch of fall hype from the coaches and it's a fair bet Carpenter is now the leading candidate to follow Ruiz. Fellow 2019 recruits Nolan Rumler and Jack Stewart were also potential centers as recruits, and preferred walk-on Andrew Vastardis, who's been involved in various position battles for a few years, played some center in garbage time this year as Spanellis was repping at guard case he was needed.

Three things I learned while circling…
Motivational Tips to Help You Stick …
CBD 2020: What to Expect + Our Top Pr…
Why Friday The 13th Will Be Your Luck…
Data’s of top-performing cryptocurren…

I'll never forget his commitment video. One of the best/funniest ones I've seen.

Ugh. Good luck, but I really wanted him back.

We’ve got talent in the pipeline now for the first time since... mid 2000s? But a senior center would be a huge asset with two new guards, no matter how good they are.

We are now replacing 4/5 of our OL. That’s rough even if we have top 100 types behind them.

But 2 of the guys taking over spots have started before and have at least a full season of playing OL on special teams. And they're both grown men and not freshmen or redshirt freshmen. Makes the proposition of slotting in two top 100 types as first time starters seem a lot less scary.

Yeah, I was just rewatching the first half of the bowl and wishing that the line was coming back. We may have to endure another maturation process next year. But such are things.

Anyway, good luck to Mr. Ruiz. It's hard to argue with leaving if you can go in at least the third round.

Yeah I wasn't too worried about the line next year with Ruiz coming back. We got enough guys to fill in 3 slots. You figure there are enough bullets in the chamber. 4 definitely makes things more worrisome. Of course some of the new guys will be good. Chances that the line will take some step back are near 100 percent now. Not that it will be a tire fire of course.

Sorry, call me old fashioned but this trend of guys leaving their teams early (which has been exacerbated over the past 10-15 years) will ultimately end up hurting college football.

Best if luck to Cesar, a great player.

Btw, "hoping against" anyone turning pro early is gross.

I'm a Michigan fan, man. It's alright to hope Michigan gets their pro-caliber players to return. It's not like I fault him or think less of him for his decision.

So Spanellis left as the heir apparent at C. Neg away if you must, but this is a pattern with this regime.

At least we have Warinner.

If you read the article you would know that he seems to be leaving because he was passed on the depth chart by a red shirt freshman. That is not a bad thing for the team's future.

Rumors popping up of Jeter and Filiaga hitting the portal.

(Edit: already addressed by Umbig in the other Ruiz thread.)

I have to conclude that these two have been passed.

Man, even OL are hitting the portal the second they get passed now? I can't blame the players for that but making it hard to develop and keep players.