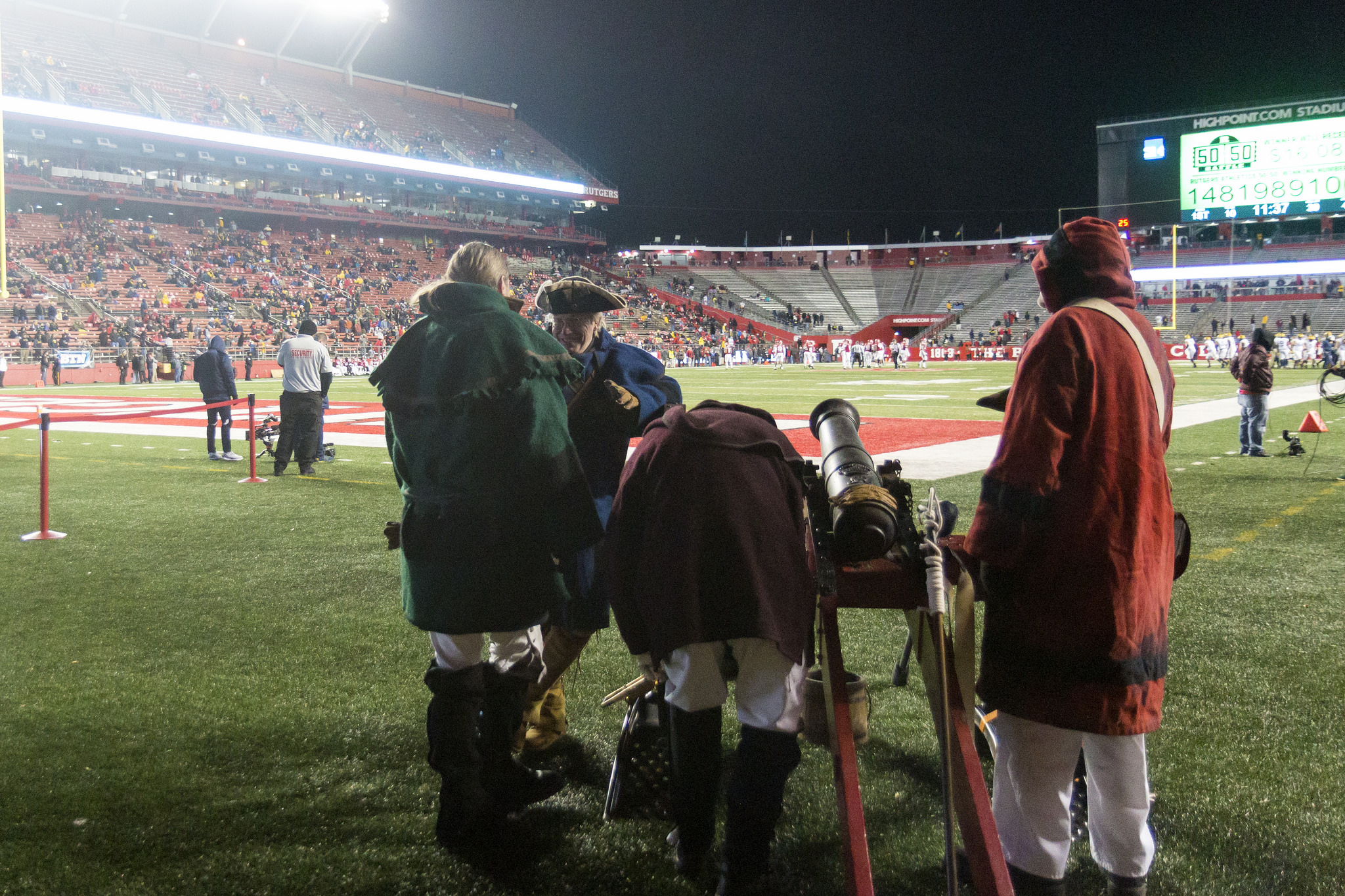 I’ve heard people say that the best way to find a good place to eat on vacation is to strike up a conversation with a local. Judging by the above photo, the locals know their Rutgers football. Rutgers put their best into this game for a certain definition of “best,” even digging a trick play out of the back of the book and deploying it late in the third quarter for a 19-yard gain on a QB-RB-QB connection. Had they scored, Rutgers would have pulled within 14. On the next play, they tried to give Michigan’s defense whiplash with a Wildcat look; Raheem Blackshear’s handoff went off the side of Isaih Pacheco, Michigan recovered the fumble, and the game was essentially over.

It took Michigan five plays to score after the fumble recovery, a touchdown that took the game from essentially to emphatically over. Four straight handoffs to Tru Wilson moved Michigan from the Rutgers 42- to their 10-yard line, at which point a beautiful backshoulder throw to Nico Collins put Michigan up 35-7. This was just one of Shea Patterson’s many inch-perfect throws on the night, which ended for him (and most of the other starters) at the conclusion of the third quarter. The offensive line should get credit for some of Patterson’s on-the-money deep shots, as they gave Patterson as much time to throw as he’s had at any point in his Michigan career and were a significant factor in Patterson finishing 18-of-27 for 260 yards with three touchdowns and zero interceptions.

The run game had a quizzical outing, especially when considering how well Michigan’s line held up in pass protection and the trajectory the running backs had been on. Michigan ran the ball 40 times for a sack-adjusted 199 yards, or 4.98 yards per carry. Chris Evans, however, was responsible for 61 yards on a single carry, taking the first handoff of the fourth quarter and the first snap of Brandon Peters’ night through the middle of the line and past Rutgers’ secondary to the end zone. Removing Evans’ carry, Michigan rushed for just 3.54 yards per carry.

[After THE JUMP: how Michigan avoided the Golden Idol of trap games] 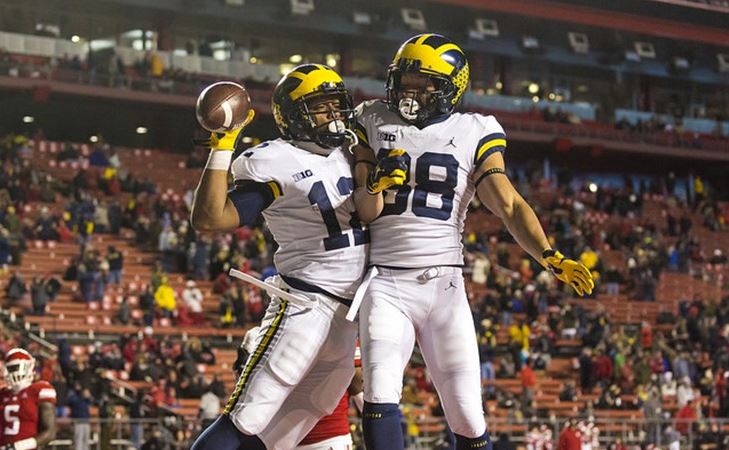 It seems that this was just a weird game for rushing, as Rutgers finished with 33 carries for an expectation-shattering 193 yards. Rutgers’ run game was responsible for the most surprising moment of the game, an Isaih Pacheco 80-yard carry on which Devin Gil got sealed inside by a guard while Chase Winovich and Tyree Kinnel widened to cover end-around action. Pacheco found the cutback lane, and the end of the first quarter finished tied at 7.

Michigan responded with a 12-play, 65-yard drive, but even that drive had a moment that gave this game the aura of a possible trap. Ben Mason appeared to convert a 3rd-and-1 before stopping his forward progress, moving backward, and attempting to loop around the end of the line to daylight. A jersey pull ended up bringing him down, but a nice lead block from Mason on 4th-and-1 gave Karan Higdon the room he needed to get the first down and then some. Higdon finished the drive with a one-yard touchdown, breaking 1,000 yards on the season this afternoon and finishing the game with 15 carries for 42 yards and two touchdowns.

The offense cruised from there, finishing the first half with another Patterson-to-Collins touchdown and a 21-7 lead. They continued the tear in the second half, scoring on three of their first four possessions. The offense only had the ball for two full drives in the fourth quarter, and one of those was the one-play Chris Evans touchdown drive. Harbaugh and company did alternate backup quarterbacks and effectively obfuscate that situation in said quarter, first sending out Brandon Peters, then Joe Milton the next drive, then Michael Sessa for a snap, then Milton once again to end the game. 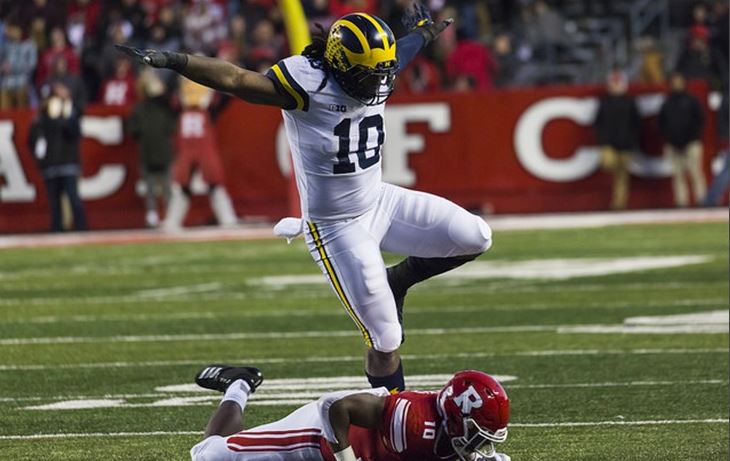 Not to be outdone, Michigan’s defense recovered from the one bad thing and shut Rutgers down until the one garbage time drive that all teams seem to be getting treated to this season. Ignoring their one-play, 80-yard scoring drive, Rutgers had no drives longer than seven plays for 38 yards going into the fourth quarter. Even their single long drive, which lasted 12 plays and ate up almost six minutes of the fourth quarter, petered out after 38 yards when Ambry Thomas read Artur Sitkowski’s eyes and jumped a route for an interception.

Though it didn’t reach the cannon-silencing levels of 2016’s 78-0 drubbing, Michigan got in some quality pass-pro reps while further developing timing between Patterson and his receivers against Rutgers’ best unit. Michigan also managed to take control of the game without having to put anything new on film and without much risk to their offense, with the threat of injury to Patterson on a true zone read far greater than the threat of him actually pulling it and taking off.

Michigan’s defense didn’t fare so well. Though they were able to dismantle Rutgers’ screen-centric gameplan, they lost two players to injury in the course of the game, with another two key pieces unexpectedly sidelined for the game. Lavert Hill and Kwity Paye both left the game and headed to the locker room; Harbaugh said afterwards that Hill is in concussion protocol and that he wasn’t sure about Paye’s situation. Aubrey Solomon and Josh Metellus never entered the game, as Metellus is currently working through a soft-tissue injury and Solomon was sick last week.

The Golden Idol of trap games has been avoided, but Michigan will have to maintain their resolve for one more week with Indiana headed to town. Is there a way to make the Revenge Tour include former coordinators? Could someone give the current players a crash course in why zone left makes the teeth grit and the fists clench in Michigan fans of the late Carr era?

Everybody wants me, so when do I self…
10 Benefits of why you should hire th…
The 5 Most Popular Blog Posts of 2019…
The History of the Bayeux Tapestry
CBD 2020: What to Expect + Our Top Pr…

I’ll be the first to say, I hate the Rutger game every year.

.....and likely the only to say that.   Rutgers under Harbaugh has been essentially a gimme.  You didn’t thoroughly enjoy the 78-0 spanking from start to finish in 2016?  Something’s wrong there.

I didn't particularly enjoy it.  It was like watching my German Shepherd get a hold of some poor squirrel.

I, for one, loved it. Especially when they set off the cannon for the "pick 6" when the ball clearly bounced off of the turf..... Just beautiful

Same, beat downs are quite enjoyable.  “Rob” and his Rutger team were just the next team in line to get throttled.  Fuck all comers.  On to Indy.

Rutgers could actually fire the canon and likely injure no one. Too bad their fans fail to sell tickets to UM fans at a fair price - could have been 80% Blue.

Solid win despite some clear errors in the 1st half against a vastly inferior team. 42-7 in B1G play should not be disappointing, but it is. Thank you Delaney.

Can’t be easy to churn out a lengthy article so quickly but that sentence has me confused:

Harbaugh and company did alternate backup quarterbacks and effectively obfuscate that situation in said quarter, first sending out Brandon Peters, then Joe Milton the next drive, then Michael Sessa for a snap, then Milton once again to end the game.

What exactly is the, “that situation,” that is being “obfuscated”?   I’ve read that several times and cannot figure it out.

It's not that hard to understand?  By sending out 3 different QBs for 4 series you didn't know who was going to be taking the field.  Situation obfuscated.

Overall solid.  Think Hill will be ok. Did Paye walk off on his own?

Solid game over all and Kudos to Rob for putting together a solid plan against UM.

Yes - could be an upper body injury.

He walked off but it appeared to be a shoulder/arm issue.

So Solomon being out is apparently not related to him walking off the field last week? I hope that's the case.

While one never knows what’s true about Harbaugh’s injury comments, I beleive he later reentered the game in the second half last week.

It's nice to hear the TV guys drooling over us, for a change.

Been discussed already.  Gers was contractually obligated to give Ash a 3yr extention because they are on probation and it isn't his fault.   They owe him $10MM if they fire him.   They won't fire him.

Not sure why, but this felt like a non conference cupcake carelessly scheduled amid our conference schedule. My initial reaction was ho hum but in reality we kept it simple and had our way. I’ll take the W.